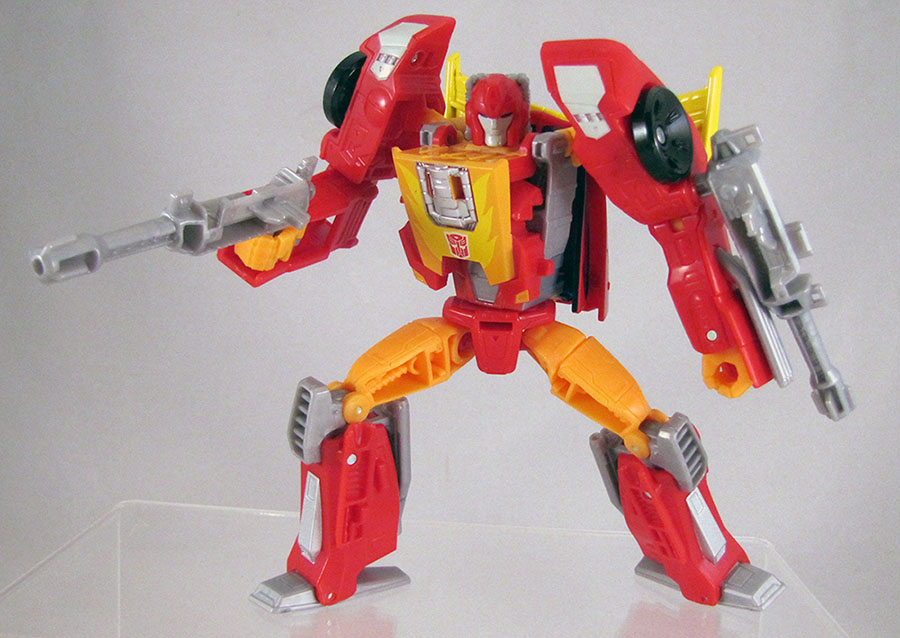 I own Titans Return Hot Rod because I wanted Getaway.  As mentioned yesterday, Getaway was shortpacked, and so he was only available from BigBadToyStore in a set of everybody from the case.  I am not super into the market of Deluxe Hot Rods Who Don't Look Terribly MTMTEy, and if I were, I'd probably prefer one in magenta with solid gray boots, which is what TakaraTomy is likely to do with him.  And so my plan was to skip Hasbro's Hot Rod and wait to see what TakaraTomy did.  I've got Cloud Rodimus, which is phenomenal, and so any additional Hot Rod would have to be amazingly fantastic to not be surplus-to-requirements.

But, again, if I wanted a Getaway, I had to get a Hot Rod as part of the package deal, so here we are. 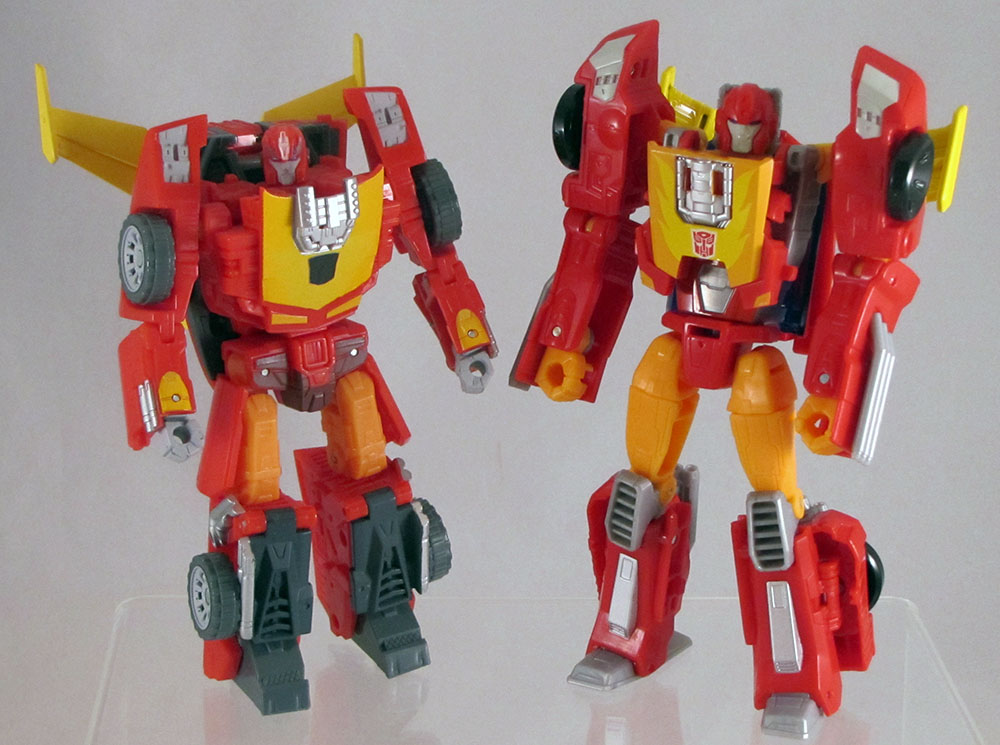 And, actually, I'm pleasantly surprised with him.  The 2006 Classics Rodimus which this Hot Rod essentially replaces is... well, yeah, it's ten years old.  And even then, for its time, it was a little awkward.  Its cardoor skirt was interesting, but constantly got in the way of itself.  It had no rotational bicep articulation, and so its arms couldn't point outwards to shoot at anything.  It was pretty scrawny for a Deluxe of its time, as well, being hardly larger than his wavemate Bumblebee, who was small but came with a little jetski on a trailer to compensate for his lack of mass.  And so 2006 Classics Rodimus existed for a long time, filled an important character role, and had some neat ideas, but was often a chore to do anything with.

I was sort of ambivalent about New Titans Return Hot Rod ever since seeing images of him.  He seemed to be kind of a boring direct update, the same toy again-ish, even more than Transformers collectors tend to be used to.  He's got real similar arms, with the oversized shoulders, and his hot rod engine still ends up on his sternum, which is something he and Classics Rodimus share but few other Rodimi/Hot Rods do. 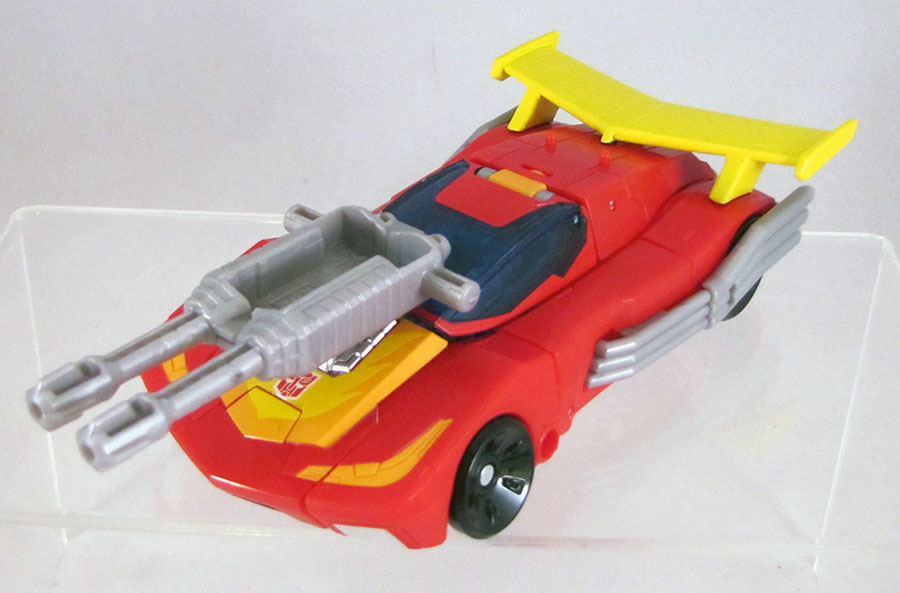 In hand, though, I've been enjoying him way more than I thought I would be.  Titans Return Hot Rod is a sizeable Deluxe Class toy (the tallest in the line so far by a smidge), and his engineering removes all of the little annoyances of the older toy.  His arms are set out from his torso, giving them room to move, he's got that bicep articulation, and his thighs are unencumbered by any sort of door skirt kibble.  Also, hey, he's got waist rotation, which is a bonus.

Oh, and his head pops off and transforms into a little dude who can ride inside him in car mode.

The car mode is more appealing to me, I think, as well.  The 2006 toy's car mode is a wedge -- which is fine, because Hot Rod's car has always been this doorstop with wheels, but the new 2016 toy adds some more interesting curvature in there to keep things interesting. 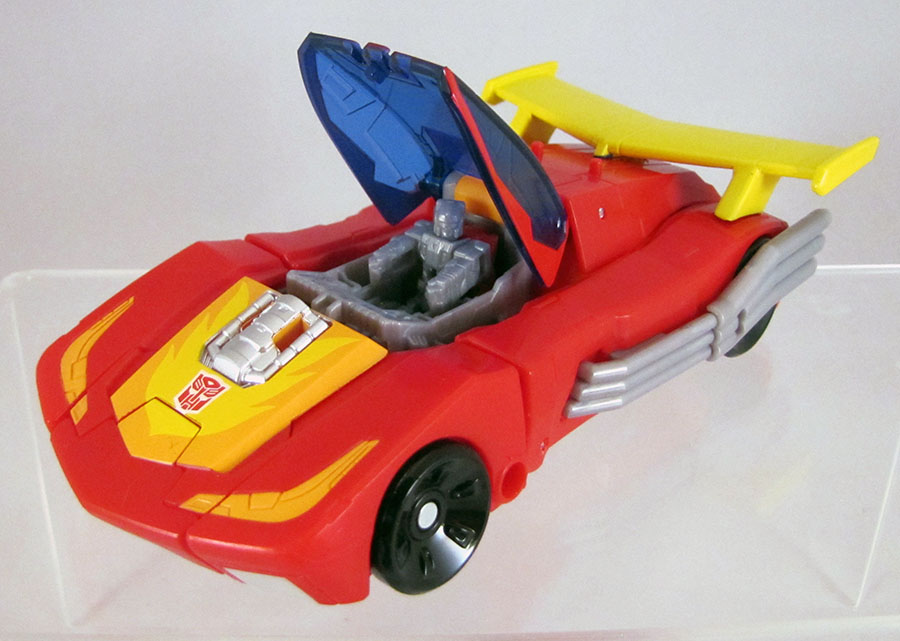 Hot Rod's hips were, however, a little loose, causing him to do the legsplits constantly, but dabbing some floor polish into his balljoints and sockets fixed that easy-as-you-please.

It's also nice, I GUESS, that Hasbro was able to finally get that "Hot Rod" trademark back after so many damn years.  But with a Hot Rod showing up reportedly in Transformers 5, I guess this was the time to put all your trademark ducks in a row or whatever.  "Rodimus" isn't a great name, but "Hot Rod" isn't super swell either.  It's... just what he is.  It's like naming Ravage "Cat."  (Sidestepping for the moment, of course, that Ravage's name in Japan IS "Jaguar.")

Being a Deluxe Class-sized guy fits better scale wise into my MTMTE/Lost Light display, but the Cloud Rodimus I have, while way too tall, looks more like MTMTE Rodimus, with his pointy head and yellow fists and yellow forehead.  This means Deluxe Titans Return Hot Rod is a little surplus to my requirements, but the toy is fun enough I don't regret owning him.  I like him enough I might still buy the TakaraTomy one if it's decoed in a way that pleases me.  I only own this guy as the "cost of doing business" of needing to get Getaway, anyway.