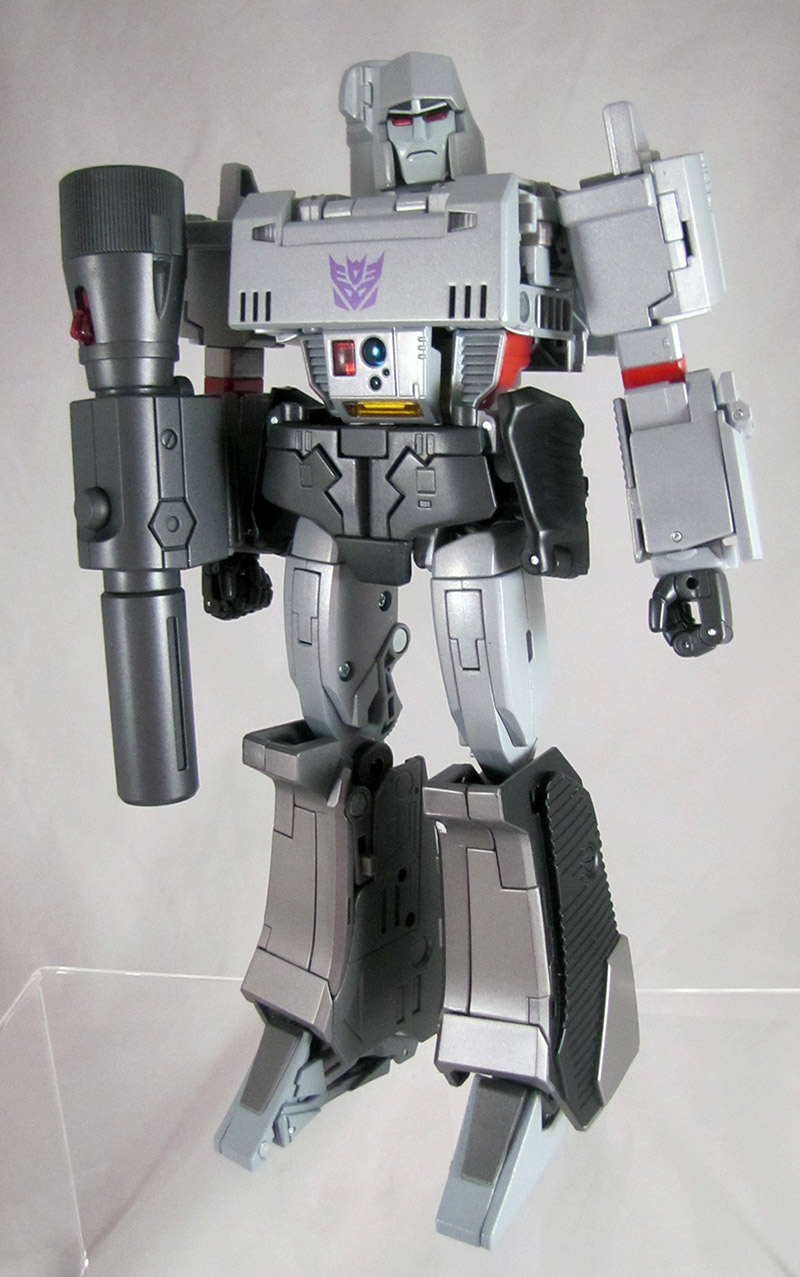 Look, I gotta crank out this Masterpiece Megatron (the second one) review so I can paint the head of mine dark gray like in the comics.  I've taken billions of photographs of him in his various modes and all the various stuff he comes with, and I've processed them, and they're all friggin' accessories from the friggin' cartoon, and I've just gotta de-cartoonify this guy.  I bought this dude to face off against my Masterpiece Ratchet, dangit, Marvel comic style -- I don't need no Giant Purple Griffin doofus.

(I do like his Prime Problem mind-control helmet because it is hilariously ridiculous.)

The original Megatron toy was awkward.  Its robot mode looked awkward, it transformed awkwardly using tiny struts that easily broke, and the little curly-q scribble across his chest probably said "awkward" in some alien script.  The comic and cartoon strongly anthropomorphized the robot design further, essentially ending up with a robot mode that didn't really have a lot of recognizeable gun kibble on him.  They altered the shape of the chest so it didn't look so much like a gun chamber, his legs were thickened up, his head shape rounded away from looking like part of the grip, and maybe the halves of the hammer were left on top of his shoulders.  And, yeah, there was a relatively unaltered scope on his arm, but now it was a cannon! 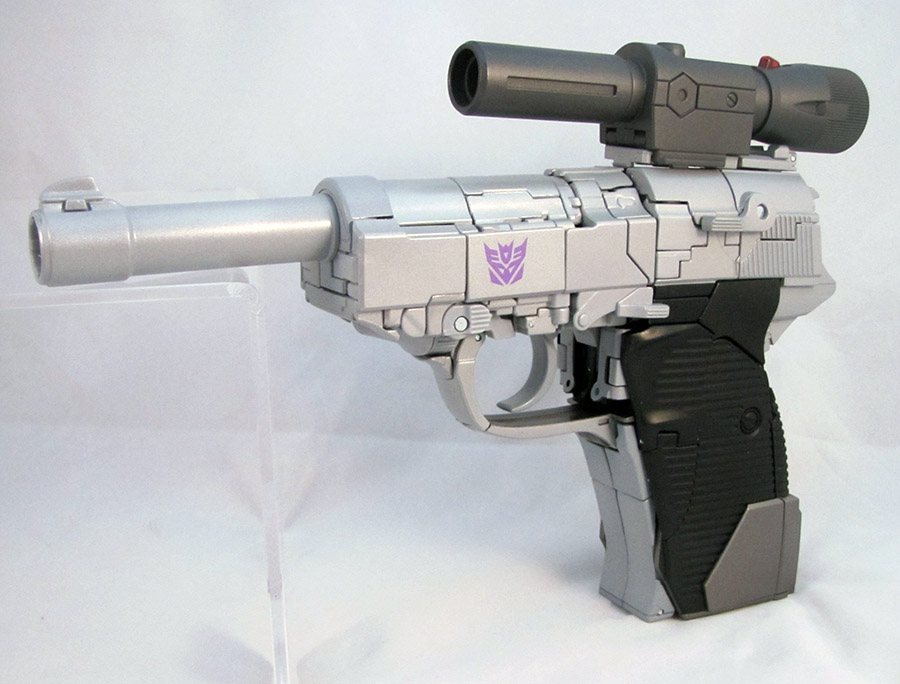 There was an attempt at a Masterpiece version of Megatron early on in the line.  It was number five, if I recall, after some stuff that was easier to retranslate animation models into toys, but eventually you gotta do the Decepticon leader.  Even if he transforms awkwardly into a handgun.  And, man, this first Masterpiece Megatron was awkward.  I think we learned recently that it was designed in a rush, like over a weekend, and I guess that explains a lot?  It just didn't look good, it was thin and gangly, stuff popped off it if you looked at it wrong, and it was a chore to transform.  Oh, and its metal parts rusted on you overnight.

WELL GOOD NEWS, at Masterpiece Number 36, there's a new Megatron.  Since the first MP Megs came out, there was an adjustment of scale, and not only was the original Masterpiece Megatron an ugly piece of crap, but he was also excessively oversized.  But, again, the source material is awkward, and so I feel like TakaraTomy kind of pushed this one off for as long as they could.  They redid Optimus Prime at MP 10, but Megatron?  Ehhh, 36.  After, you know, Cheetor. 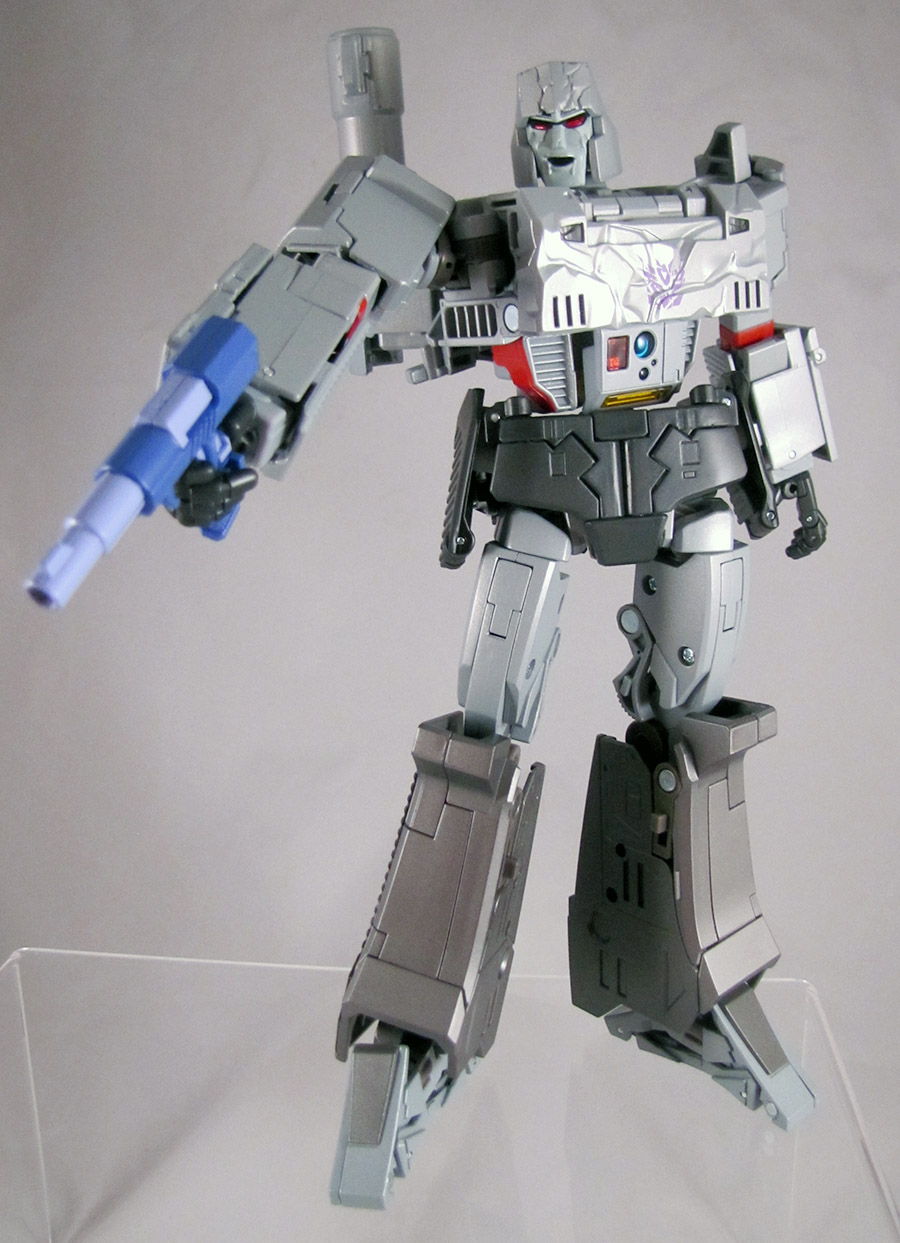 Where was I?  Oh, right.  GOOD NEWS.  Because this guy is... way more complicated.  Waaaaaaaay more complicated.  He's half the size and probably has twice as many parts.  But!  He's not an ugly piece of crap.  He is goddamned fucking beautiful.  See, that's the secret -- you can make a handgun transform into Megatron's animation model if you essentially sculpt the thing from one form into the other like clay.  That's how many parts this guy is made of.  Transforming him feels like you're changing his shape on a molecular level.  At that point, anything can be anything else.

Much like Masterpiece Cheetor before him, Megatron's chest is fake.  It's a fake gun chamber.  Because, as I mentioned above, the animation model's chest wasn't really that gun chamber shape anymore.  They angled it up all to hell and ended up with something new.  Instead, the gun chamber is the entire rest of his torso, which was split up into shards and crumpled up behind the fake gun chamber chest.  To transform him, you unwrap the shards and essentially form the gun chamber around the fake chest as if you're wrapping it up in aluminum foil.  It takes a while. 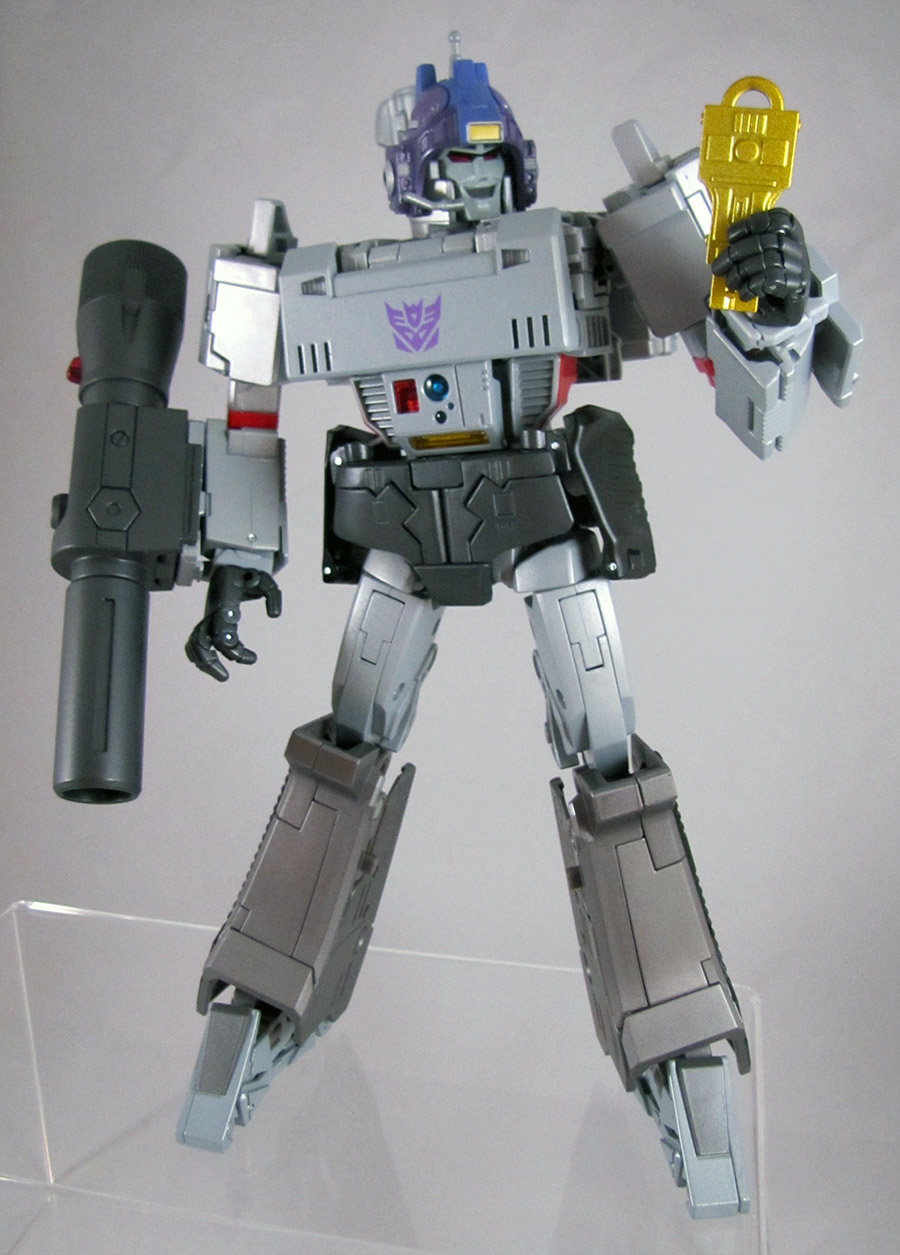 Meanwhile, the legs have to go from being thick cartoony Megatron legs into much thinner, less-stylized gun grip halves.  You basically unwrap them, squeeze them skinnier, and then reattach all the ends elsewhere.  It is impressive.  It's not fun, but it's impressive.

And that, I think, is my take-away from this toy.  I think I hate transforming it, but I RESPECT it.  There was a goddamn lot of engineering work put into making one thing magically morph into another thing.  This toy is amazing.  I am in awe of it.  But, also, I'm probably never going to transform it again because goddamn.

I am surprised at the amount of charisma this toy has!  Like several other recent Masterpieces, Megatron comes with a few extra faces with different expressions.  And his laughing face?  It is the best.  My MP Megatron with his laughing face is the most I have ever liked G1 cartoon Megatron.  He's just so happy.  So happy and evil.  I want to be the friend of this dope. 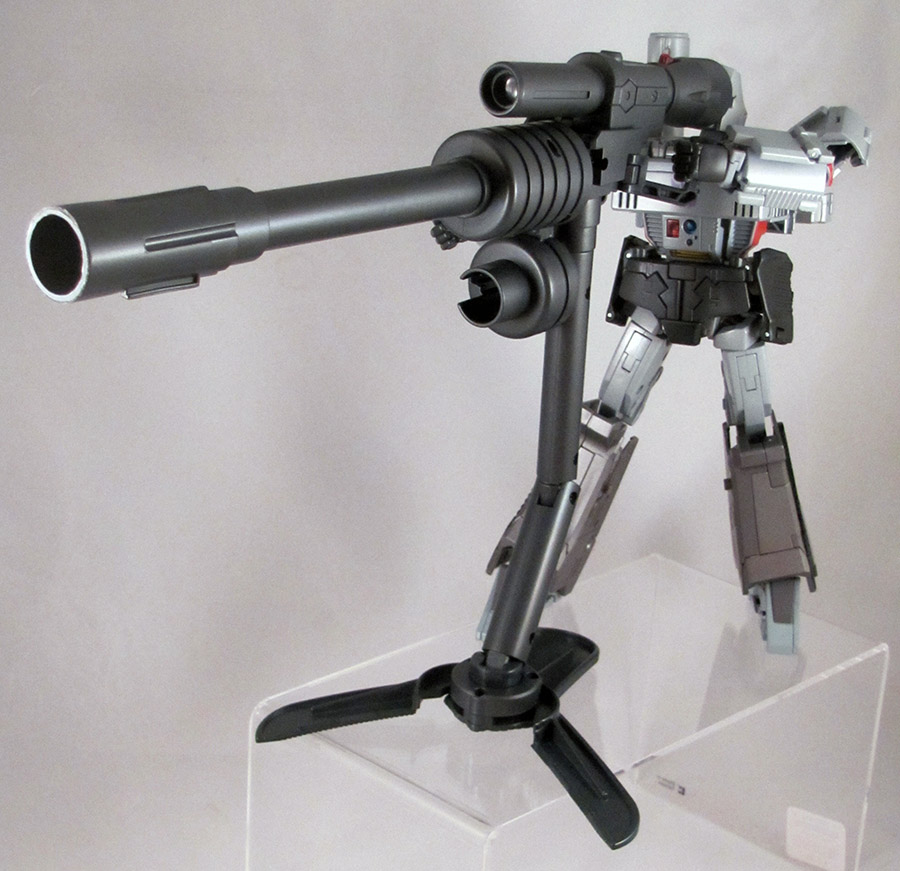 Also, his articulation is far and away the most extensive of any Masterpiece so far, I think.  Which for a Megatron is weird, because I don't think one's had even a rotating waist before.  Usually the transformation gets in the way of that.  But no, his waist rotates, he's got an ab crunch, both his elbows and knees are doublejointed so his limbs can bend back on themselves, he's got small amounts of finger articulation, and his neck has some good range of movement.  You can get this guy to do a shitload of stuff.

(there's more photos on my tumblr)

Okay, have I talked enough?  Can I go try to start paintmatching the gunmetally grayblack he has?  Good.