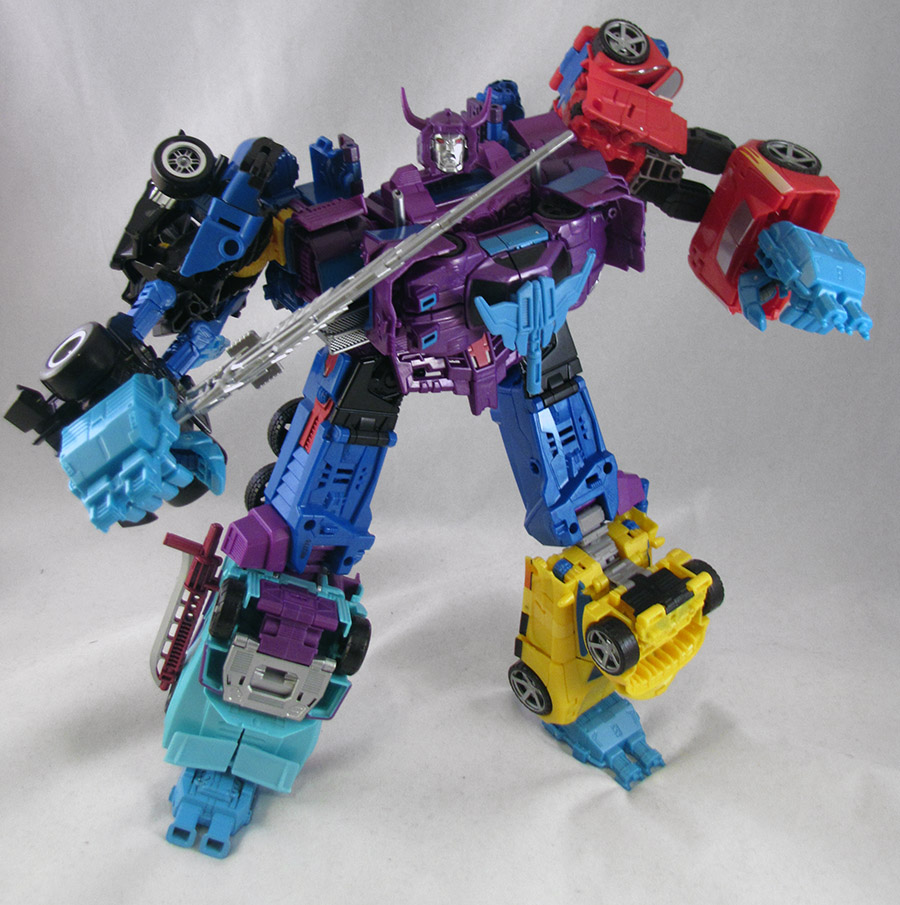 Quickly: So, like, in the Nineties there was almost a Generation 2 Menasor, but he was canceled and BotCon got to have one-fifth of him as an exclusive, the rest being limited to a small handful of samples, causing him to be amazingly valuable.

But now there's a Combiner Wars giftset that does Menasor in his G2 colors (sort of), so everyone can have one now!  Hooray!  And mine was an early birthday gift!  Yay, thanks, Scott!

Combiner Wars G2 Menasor is one slick package.  I mean, obviously, you get all these guys at once, rather than having to get them piecemeal in stores or online, and so that's good.  You open up the box and you see everything all arranged there in a plastic tray, and life is good.  Also inside the box is a large paper envelope, which contains your instructions, a collectors card, and a cardstock-quality poster of Menasor.  ....well, G1 Menasor, not G2 Menasor.  But it's still friggin' cardstock paper inside an envelope, so.  None of that floppy thin paper nonsense, this is the fancy stuff.

I have some quibbles though.  From all appearances, the deco on this toy was taken from some guy's DeviantArt digital mockup.  (to the point that the official Transformers Facebook account used his mock-ups exactly in a promotional image, including the yellow Offroad you don't get in the set)  That's kinda shady.  And it also means we get a Breakdown with purple and silver instead of pink and gold, since I guess the DeviantArt mockup guy was working off this fan-painted version of the canceled G2 Stunticons and not the BotCon version people actually know.

Also, if you're expecting Blackjack to be at all snug when connected to Menasor's chest, don't.

That said, this set is a pretty good deal, especially if you don't have any of these guys yet.  You get six brightly-colored toys for $100 (or less, as Amazon inevitably drops it a few bucks like they did Superion) that combine into a robot and visually emulate a toy 99.999999999999999% of Transformers collectors can't ever own.  Plus, y'know, the poster.  I have no idea why I love that poster so much, but I do.   You may love the poster less.

If you're dead inside.