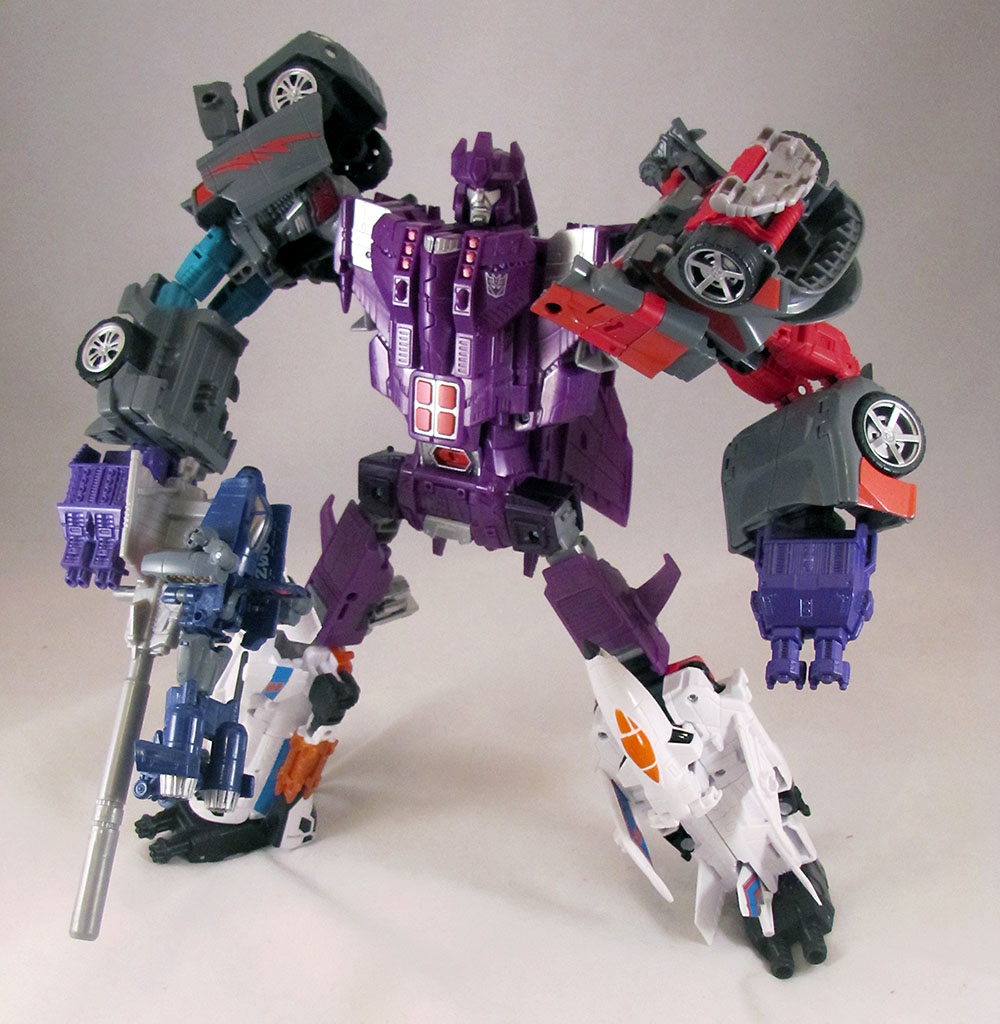 Combiner Wars Cyclonus combines with any four Combiner Wars limbs and Viper to form Galvatronus!  Galvatronus's chest and head are part of the "reshelling" that Cyclonus got when he was retooled from Silverbolt.  And, yeah, this is pretty weird.  But it's a good weird.  I like good weird.  It's just something nobody expected, going into this Combiner Wars subline, that, y'know, we'd get a Cyclonus torso who'd combine with five other guys to form a Galvatron super robot.

According to the packaging bio, Galvatronus's deal is he uses mind control to steal the limbs from other combiners, which is awesome.  It also doesn't stop anyone on message boards from asking if he's going to get "real" dedicated limbs every five minutes.  C'mon, you guys.  He steals other people's limbs.  It's his deal.  Figure this one out.

Cyclonus and Galvatronus are not going to be involved in the Combiner Wars fiction in the IDW comics, which is something that made me sad when we learned it a while ago.  Sure, it'd make no sense -- why would Cyclonus transform into Galvatron?  The two are definitely not friends in IDW, in contrast to the syncophantic Smithers/Burns relationship the two have in the original cartoon which this toy reflects.  Additionally, IDW Galvatron is specifically against combiners, and spent some time in his distant past trying to genocide any iteration of them.

But that'd actually be pretty cool, storywise, don't you think?  You have this Galvatron guy who's super against combining because he thinks they're an ethical contamination of his species, and you also have this Enigma of Combination artifact that basically kablamfs Transformers into being combiners if you shine it at them.  It'd be like that Bloom County storyline with Oliver Wendell Jones and his Electro-Photo Pigment-izer.  And then, you know, it'd involve Cyclonus some how.  Two people who hate each other being kablamfed into being a combiner together, at least one of whom hates combiners.  That's just got story karma written all over it.

Galvatronus is weird and awesome.