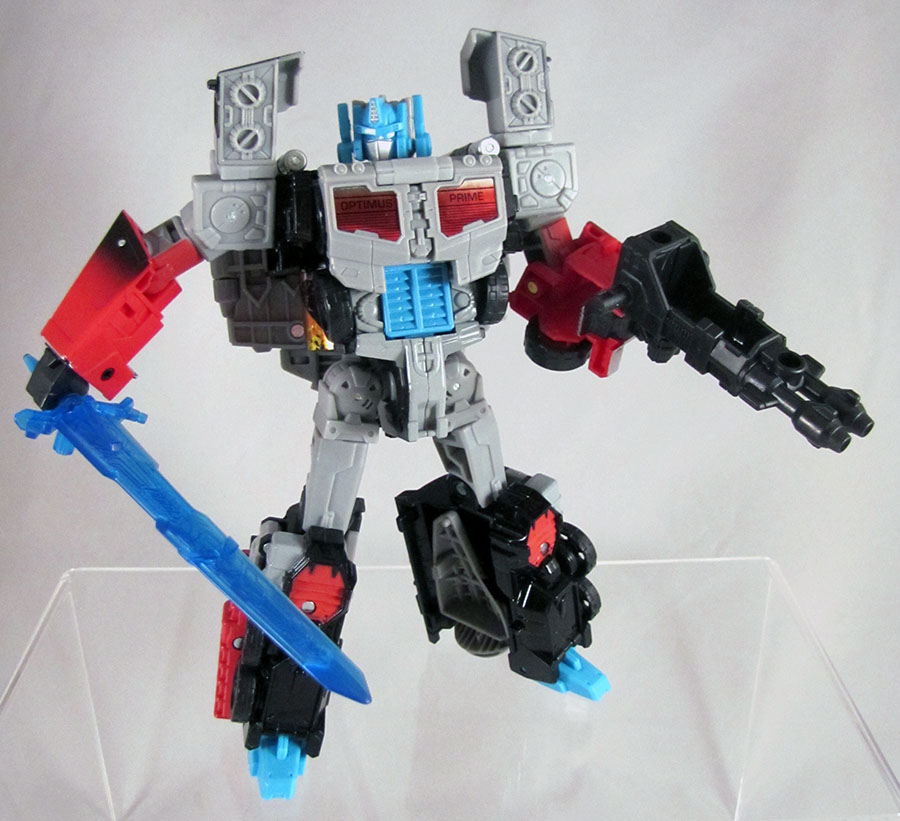 Nautica came with some other toys in her box set!  They're all right.  I'll talk next about Laser Prime, who's one of two toys in the set that's a mold I haven't owned before.  There's a version of Laser Prime at retail, in normal Optimus Prime colors, and I yawned so hard I actually didn't buy a Transformer for once.

You see, like, okay... back in the Nineties, Laser Optimus Prime was a thing.  It was one of the first truly articulated Transformers toys, and so it was Everybody's Favorite Transformer for about a decade.  It was an Optimus with a glow-up sword who had a trailer that turned into a base that fired disks and missiles.  It was also decoed "wrong."  It had a gray chest with red windows and a yellow grill, and the legs were black.  And for that entire decade of "Laser Prime is the goddamned best toy ever," there were counterpart rumblings of "OKAY BUT MAKE IT IN REAL OPTIMUS PRIME COLORS."

But here's the thing.  It is 2017, and we get a new poseable G1 Optimus Prime toy every few months.  You could fill shelves and shelves with all the poseable G1 Optimus Prime toys we've gotten since 2004.  And so at this point?  Laser Prime's eccentric color scheme is one of the few remaining unique things about him.  We've got articulation and trailer bases and electronics and swords in so many other Optimus Primes.  So when you do a new toy that's specifically a homage to Laser Prime, why the heck should I care at this point if he's got his "proper" red chest and silver grill and blue legs?

Also the new toy didn't look that great, either, which was another reason to skip it.  But if I'm gonna own this mold as Optimus Prime, I'm glad the version Nautica's box set pushed on me was the version that's decoed like Actual Laser Optimus Prime. 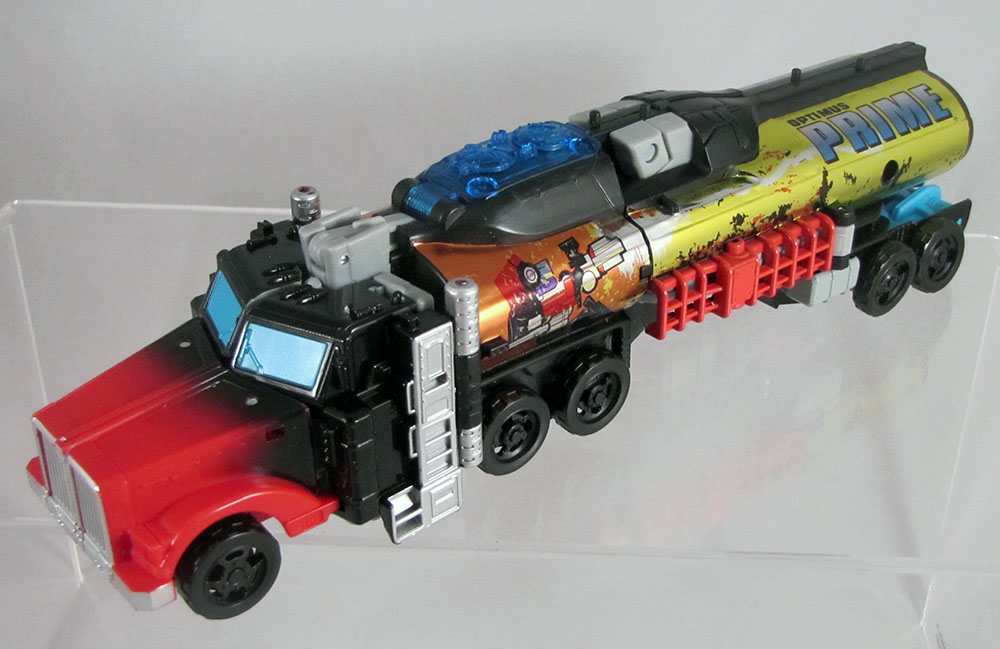 Like the other Voyager Class-scale toys in the Titans Return toyline, this Optimus Prime is a Triple Changer.  He's not-so-unobviously an Octane pretool, as he goes from robot to tanker truck to jet.  (We've seen the upcoming Octane from this mold, and it has a new head and chest, IIRC.)  The robot's okay, the tanker truck mode is better, and the jet mode is hot garbage.

But let's talk about the robot mode.  Unlike the original Laser Prime, Titans Return Laser Prime's robot transforms into the entire truck, trailer and all.  The original's robot was just the cab, which hauled around a trailer accessory.  But TR Laser Prime contains multitudes.  As such, he doesn't, y'know, transform the same way.  The robot mode essentially looks the same, but different parts become different other parts in service of this desired end.  There's a pair of helmet antenna built into the collarbone of the robot mode, so that when you plug in the Head Robot Guy, there's some added bulk.  But this don't look right, and in fact it looks kinda goofy.  Oh well.  The robot has both a sword and a hand-held cannon, just like the original, but they don't light up with electronics. 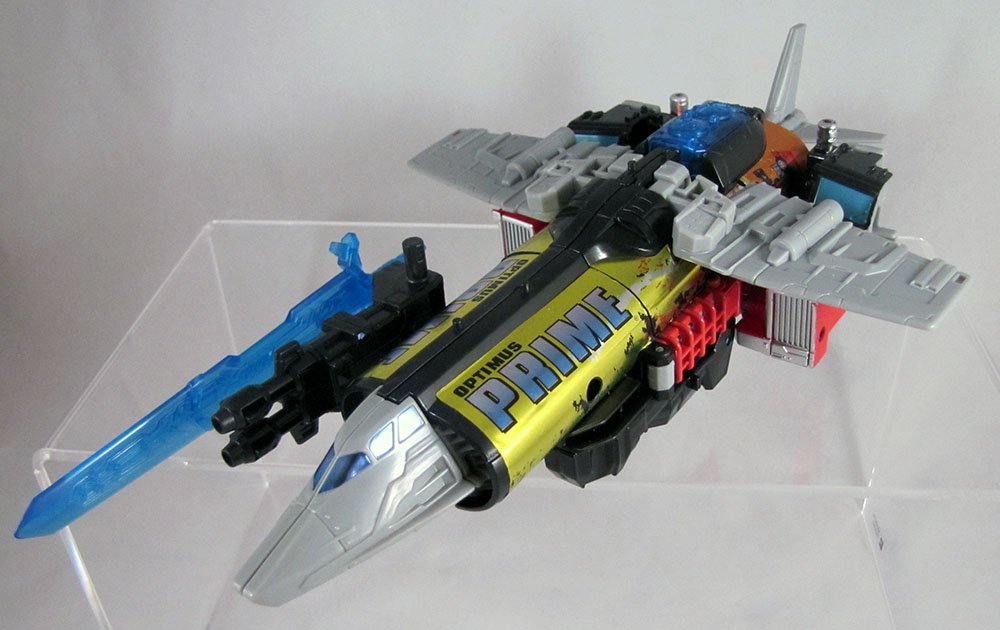 Tanker truck mode is my favorite, and it's easy to explain why.  The original Laser Prime's trailer had giant stickers covering most of the trailer, and what these stickers portrayed was a mural of Laser Prime's robot burning down a forest, followed by his name in capital letters with a cursive-y splash of "OCTANE" on top of that.  Short the "OCTANE," TR Laser Prime replicates this trailer mural perfectly.  So perfectly it appears to be just the same art, with a depiction of the original toy and everything.  Why is Optimus Prime burning down a forest?  I dunno.  But if I ever get a tattoo, I want it to be of myself burning down a forest followed by my own name in all caps.  I'd have this running down both of my arms.  Anyway, this is super awesome.  Not SO awesome that these stickers aren't a tiny tiny tiny bit oversized and so they kind of want to peel off a little at the edges whenever you so much as look at the toy sideways, but still super awesome.  It absolutely makes the truck mode, which is otherwise not terrible to begin with.

The jet mode turns the truck backwards, shoves a nose and cockpit awkwardly on the ass-end of the trailer, and barely puts tiny wings and tailfins on there.  It's awful, and I don't recommend acknowledging this mode further.

Anyway, Laser Prime definitely only has two modes, and they're both okay to great, while the stickers are a constant annoyance.  The original Laser Prime does all this stuff better, though.