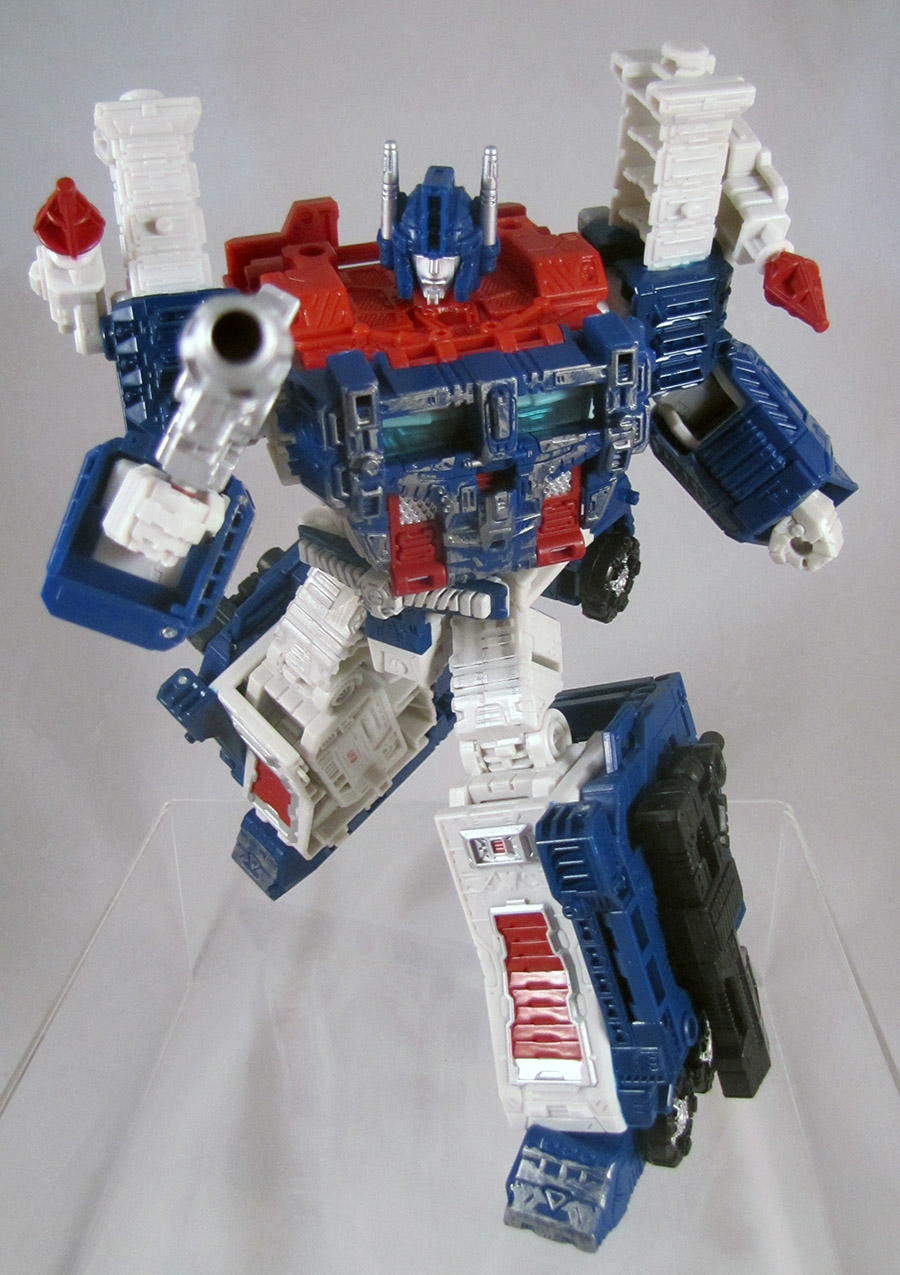 Well, Stege Ultra Magnus has stepped forward to finally make that dream come true.  For the first time in forever, Ultra Magnus is a white Optimus Prime toy which armors up into an Ultra Magnus toy.  And....

...That's about really the best it has going for it!

All the other zillions of kinds of Magnus toys kind of do better all the things Magnus toys tend to do.  Like... Stege Magnus doesn't even work as a car carrier.  He's too full of armored parts that you snap around your White Optimus Prime.  So unlike, say, Combiner Wars Ultra Magnus, you can't cram a car into him somehow. 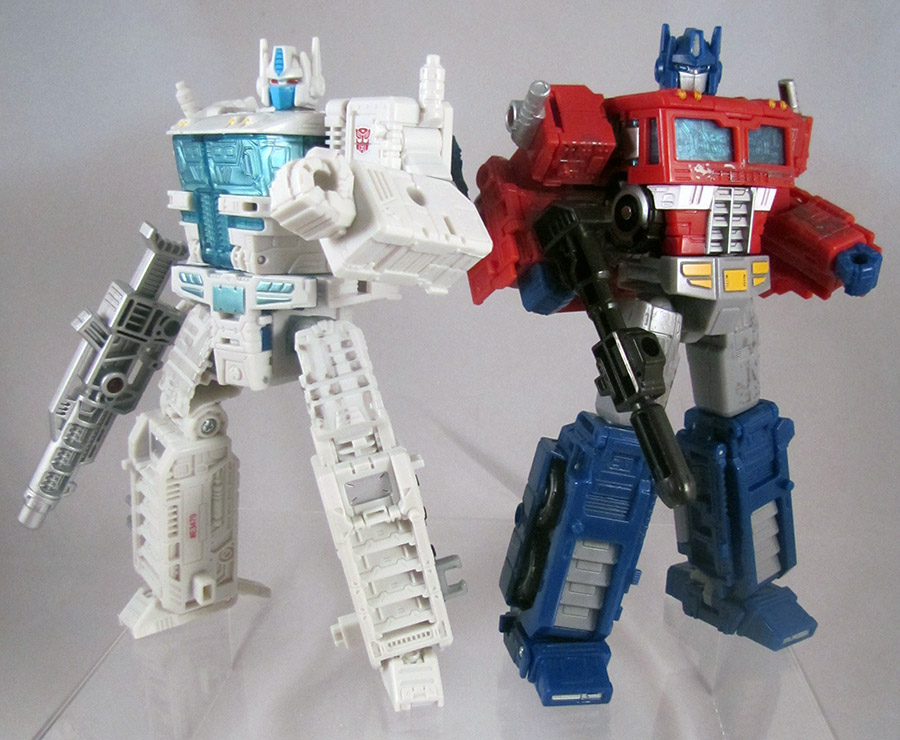 Stege Magnus is also pretty short.  I mean, it makes sense.  He's a Voyager-scale White Optimus Prime (albeit different from the actual Voyager-scale Stege Optimus Prime) that adds armor parts to make him a slightly taller robot.  He weighs more than Combiner Wars Magnus, despite being a fraction of its height, just because how he works makes him so dense.  He's full of things.  (Which, again, probably helps keep him from working as a car carrier.)  But White Optimus Prime works as the skeleton of Armored Ultra Magnus, so Armored Ultra Magnus can only be so large.

I also don't really like the aesthetics of Stege Magnus.  He's just so busy.  He is very Stege.

I do like some small non-White-Optimus-Prime aspects of him.  Like, he's an actual Space Truck, rather than Stege Prime's "1980s Freightliner with the serial numbers filed off" truck mode.  That's appreciated!  I also like how he has flippable underwear that swaps between smaller and larger robot modes.  Oh, and how his Space Truck bumper transforms along a track of plastic up his spine. 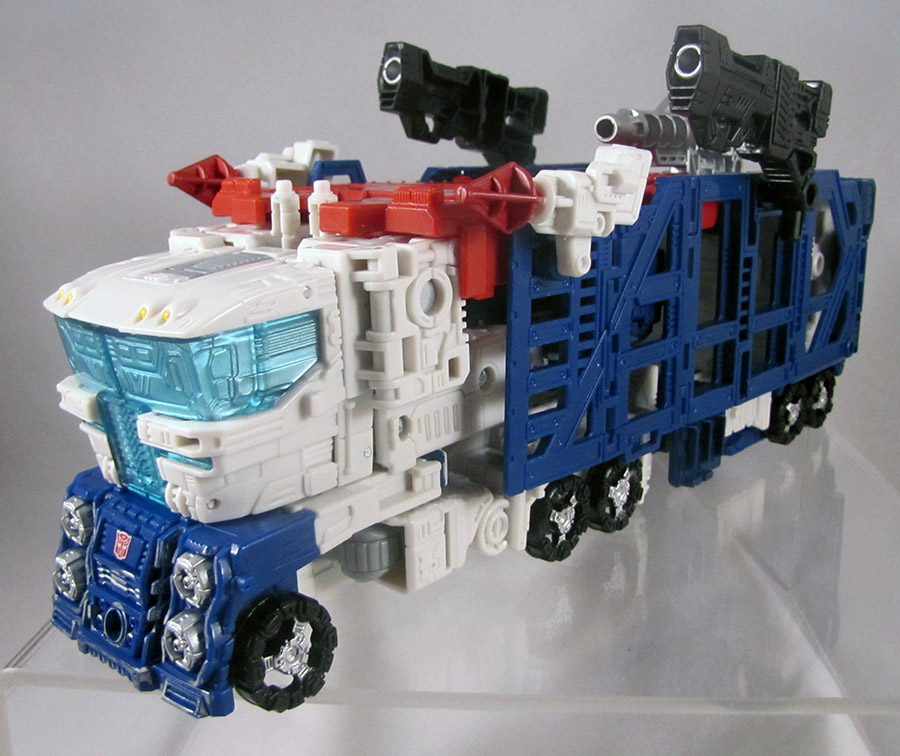 But, like, in most respects, once you start comparing to other Magnuses, for me this is a disappointing Ultra Magnus.  I definitely prefer the Combiner Wars one overall.  And that's before we get into Laser Magnus or Masterpiece Magnus or Animated Magnus, etc.  BUT: if you like the White Optimus Prime Guy who wears parts to become Big Ultra Magnus, this guy's your guy.  That's what this Magnus specializes in.

You just gotta... weigh how much that means to you versus other things Magnuses tend to do. 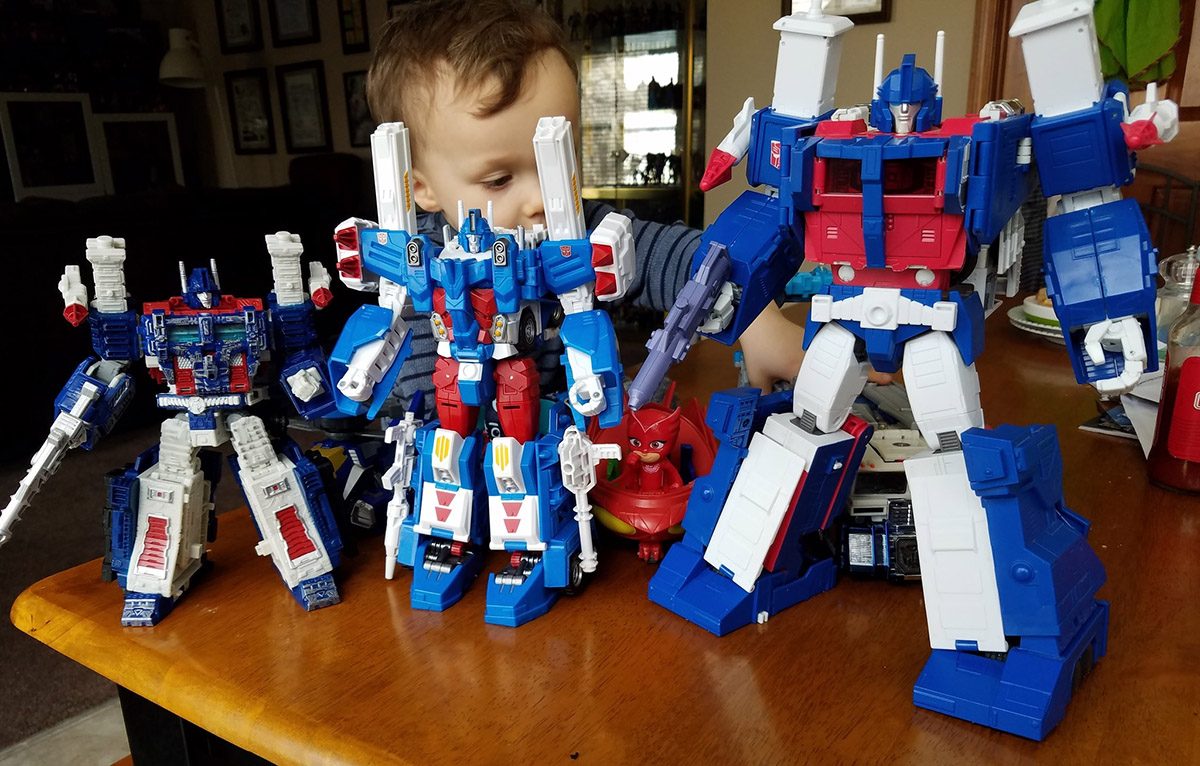 So, hey!  Waist articulation on an Ultra Magnus!  That's the innovation we've been waiting for.