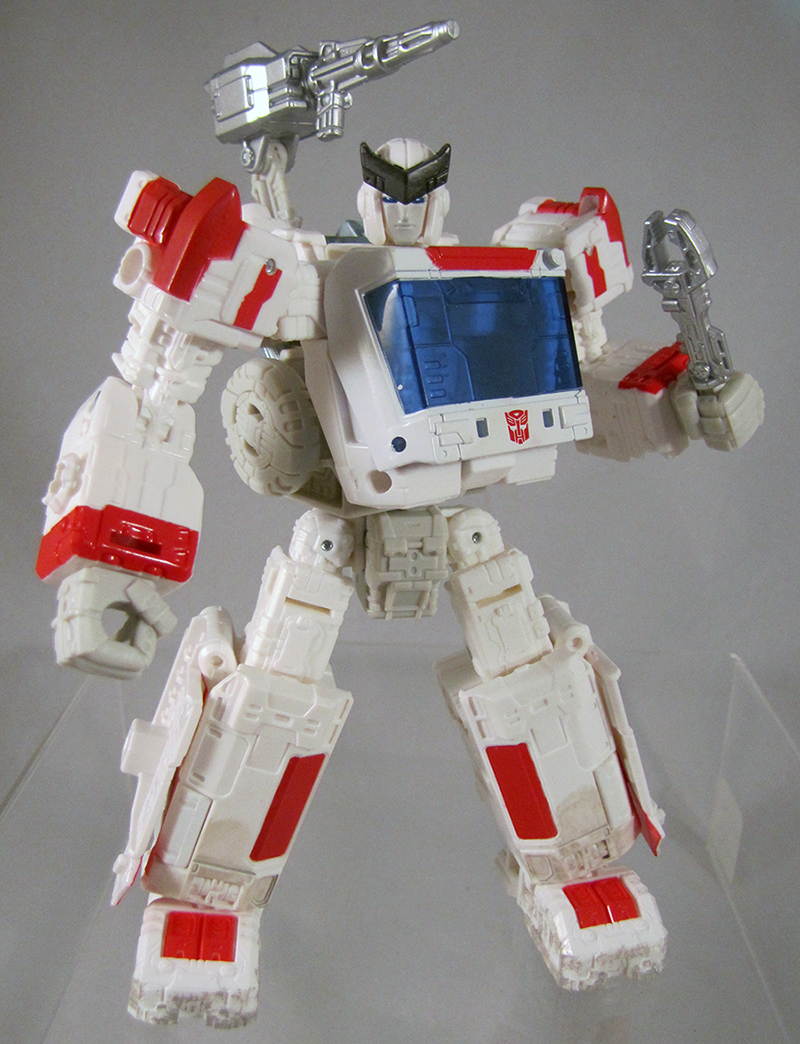 So, yeah, he's Ratchet, he transforms into an ambulance and a medical bed, he's exclusive to friggin' Walgreens, but according to the website his function is "engineer"???  And Red Alert is apparently the doctor?  Look, I dunno.

Stege Ratchet is a heavy retool of Stege Ironhide!  It's not immediately apparent, but a whole lot of him is different.  I mean, their toys are still essentially the same, but Ratchet's sculpting been resurfaced pretty extravagantly.   It's just hard to tell since, you know, the two toys have the same silhouette and also Ratchet is mostly white so details are washed out.

But it's nice to see the extra mile here.  Ratchet also comes with a giant repair arm with two potential attachments -- a laser scalpel and a wrench.  The repair arm/scalpel is based on the one inside the original Ratchet toy's trailer medical bay.  The wrench is there because Robot Doctor/ENGINEER APPARENTLY, also I guess you could hand it off to Nautica if you wanted.  Considering Ratchet's one of the bigger Deluxe Class toys in Stege, it's nice to see him with all this extra stuff regardless.  Is it because he's an exclusive?  Maybe.  (Though I suppose regular retail Ironhide came with that giant hammer.) 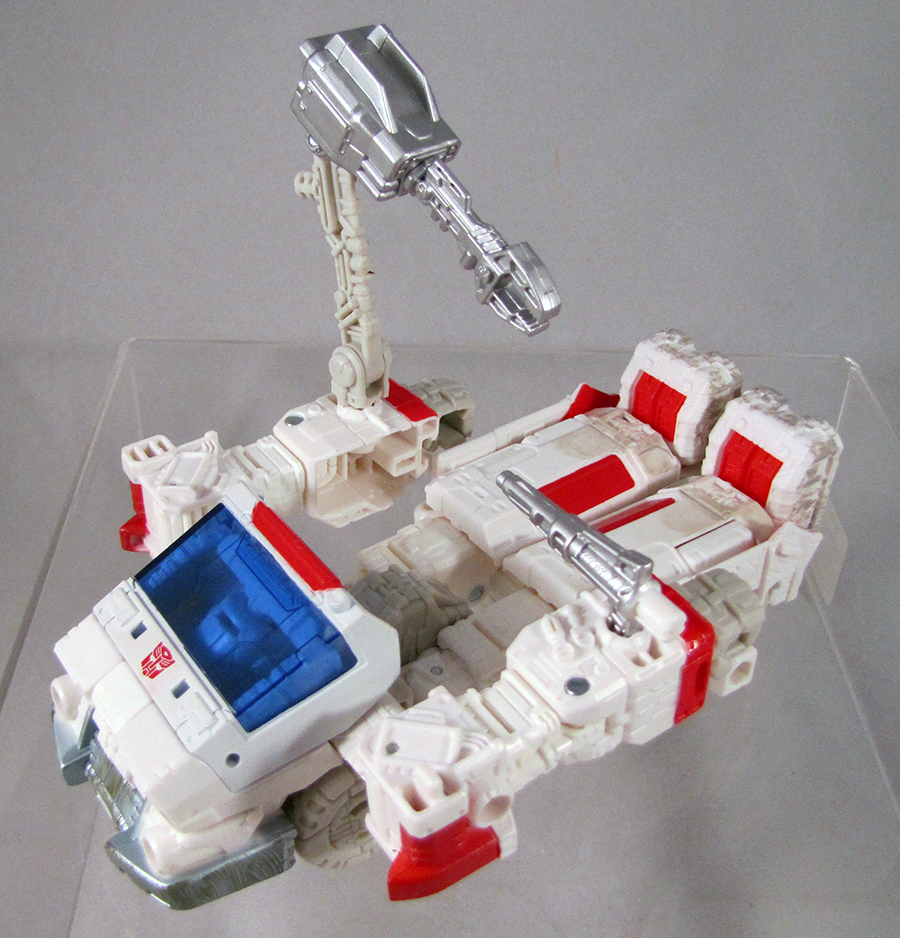 Ratchet also has a third mode, a medical bed thing.  It's basically a half-ambulance half-robot deal.  It's not terribly convincing.  But it's there and it didn't need to be, so I'll shrug and like it.  This is actually where a lot of the new sculpted tooling comes into play -- there's a series of tools and monitors on the back of Ratchet's arms that don't make themselves apparent until this mode, where they're finally facing upwards.  It's all unpainted white plastic, though, so you have to pay attention.

I don't know what's going on with the deco?  Like, okay, I get why he'll have a white helmet black chevron forever and ever because of the fucking cartoon, but why is the rest of him?  Ratchet tends to be solid white, sure, and there are ways to break up that white with some red.  The Marvel comics gave him a red helmet and red hands.  The cartoon gave him a red pelvis and red hands.  This toy... kind of randomly paints red rectangles on him.  It's not a very cohesive look!  You think, oh, maybe this deco comes together in vehicle mode, but it doesn't.  It's just as random there.  What was going on?  I dunno. 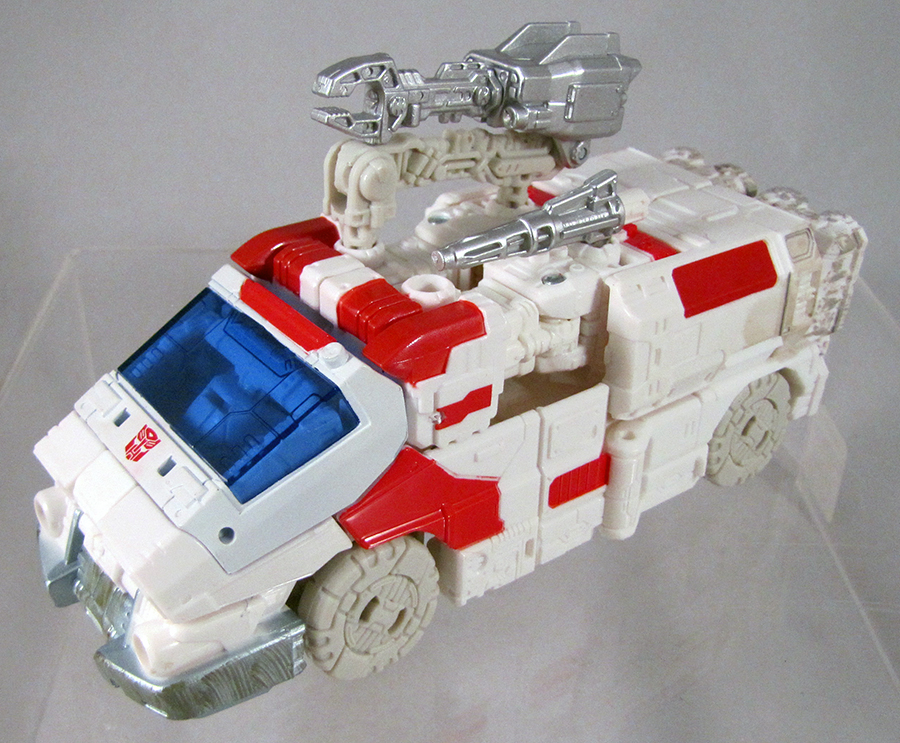 Anyway, I painted the helmet red on my Ratchet almost immediately.  It makes the weird deco choice look a little more cohesive, since there's a red focal point that isn't a rectangle on his thigh.

I will not be painting his white hands red because those white hands will be going to Crosshairs when he comes out in a month.  The Rebirth colors, yo!  (I will then be painting Crosshairs's black fists red before giving them to Ratchet, obvsly.)

Deco aside, Stege Ratchet is a pretty good Ratchet!  He's dynamic in all the ways Stege toys tend to be dynamic -- by which I mean he's a pile of boxes you can pose very well.  He's also one of the few Stege toys that, you know, actually looks unapologetically like a Cybertronian vehicle.  He's not a Lamborghini with the serial numbers filed off, or a Freightliner cab with a hat.  Ratchet's a wheeled spacebox.

A wheeled spacebox who needs his helmet painted red, gaddangit. 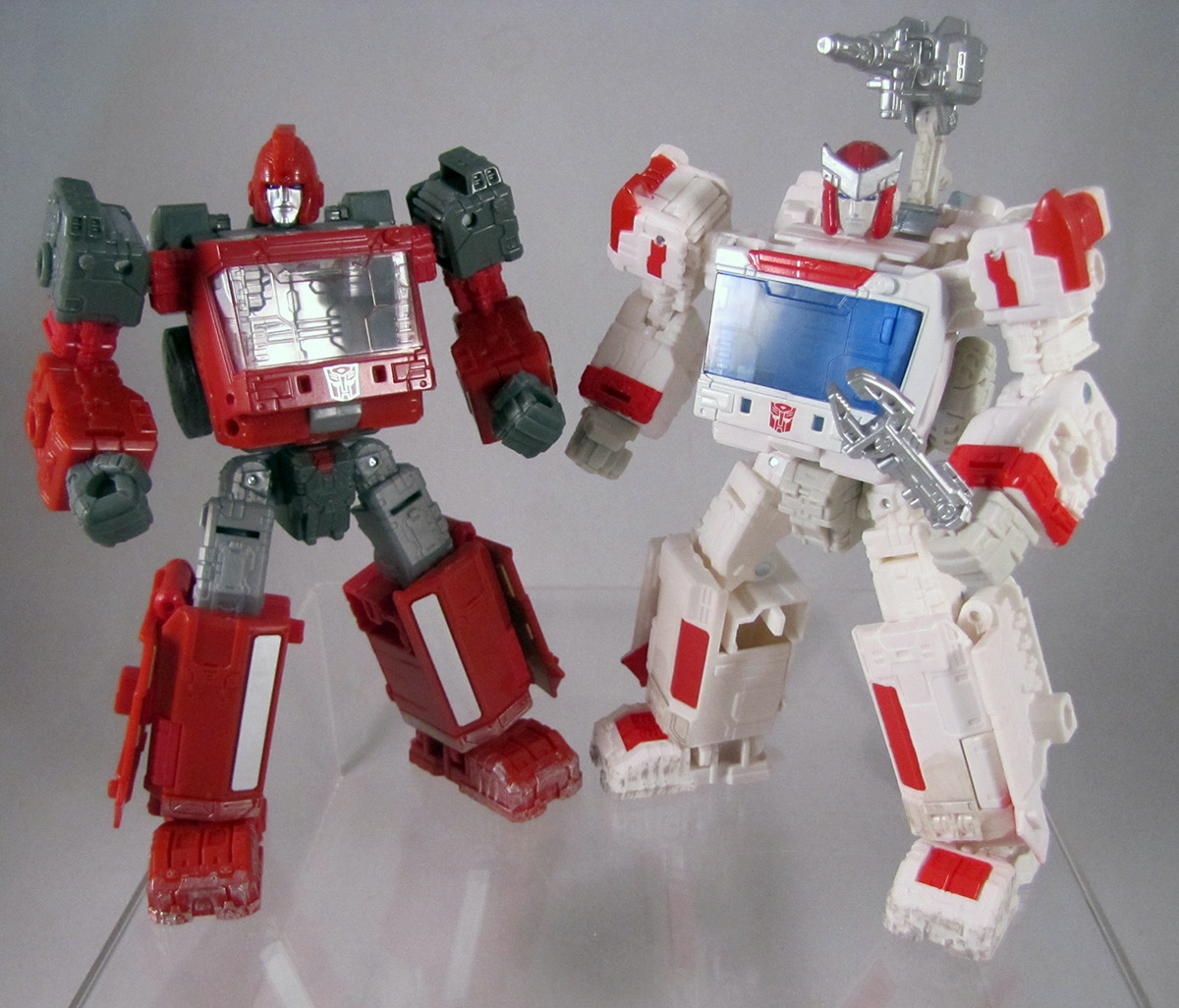