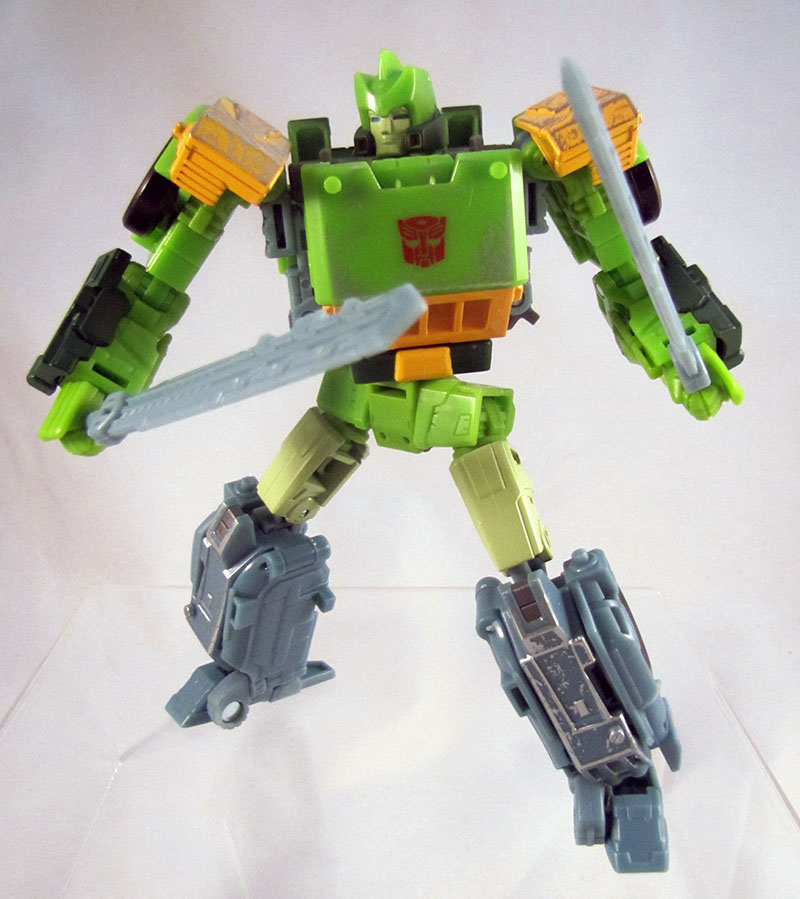 We're just gonna have to face some facts -- Springer gets pretty great toys.  Well, okay, not the first one.  That toy was... not super great.  But the BotCon 2007 redeco of Cybertron Defense Hot Shot?  The Universe redeco of Cybertron Evac?  The GDO retool of Movie Tomahawk?  And (pen)ultimately, the Thrilling 30 Springer that was the first triple-changing Springer since the original and is widely considered to be one of the better Transformers of all time?

Yeah, well, the new Stege Springer is up there, too.

Thrilling 30 Springer was so good that a lot of folks are saying, yeah, okay, so why do I need this other new Stege Springer?  It's a legitimate question!  And there's no definitive answer.  But I can definitely say that Stege Springer is a great toy in its own right.  It fits in that category that so many other War for Cybertron: Siege [sic] toys hail from -- aka, ugh it's just the cartoon design, oh wait, once it's in my hands it's pretty satisfying, what is this??? oh no I like it.

While Thrilling 30 Springer was a glorious adaptation of Nick Roche's IDW Springer, albeit too skinny to get the exact feel of it, Stege Springer is a fairly faithful adaptation of Springer as we remember him from the cartoon.  This time, though, he's not lanky.  He's wide.  He has the presence.  He's got that Han Solo-esque charisma.

It helps immensely that Stege Springer isn't as... Stegey as Stege often gets.  For example, Stege Starscream is a chunk of technogreeble detail that overwhelms the eyes if you look at him in focus.  Stege Chromia's another where you want to say, yikes, guys, scale it back a bit.  But Stege Springer doesn't suffer from that at all.  He's not overdetailed, he's just detailed.  Heck, his entire chest front is an absolutely flat box with nigh a sculpt line across it.

And while he's a big pile of boxes, it's nice to see a few curves on him nonetheless, from the exhaust ports on the back of his canopy, to the wheel wells, to his helmet.  His toy strikes a good balance between edges and curves, between detail and negative space.

He feels very at home with Titans Return Hot Rod, Blurr, and Kup, and Thrilling 30 Arcee.  ...not so much with Stege Ultra Magnus who is, again, looks like somebody was sculpting uniform detail across him while zoomed in at a billion percent. 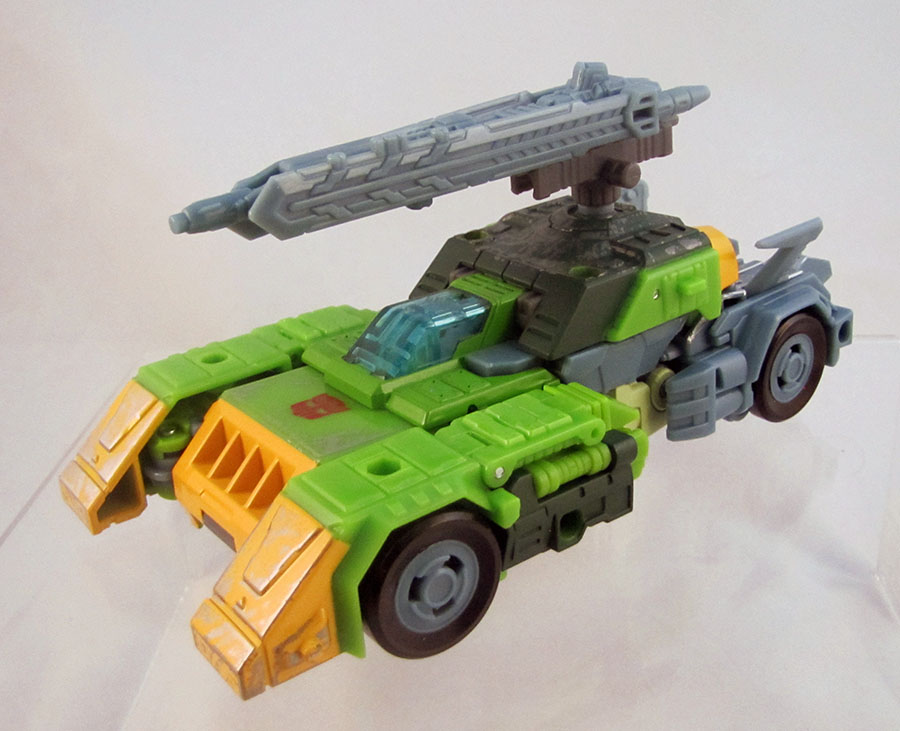 Some folks have described Stege Springer as fiddly, and, honestly, he's not any more fiddlier than Thrilling 30 Springer.  Perhaps less fiddly.  It is up to you whether the end result of that fiddliness results in very faithful renditions of Springer's original collaboration-of-boxes altmodes.  These aren't the reimagined car and helicopter modes of the Thrilling 30 Springer toy.  These, again, are just what he looked like in the cartoon, for better or worse.  He'll fit in well, again, with your newer Hot Rod, Blurr, and Kup toys. 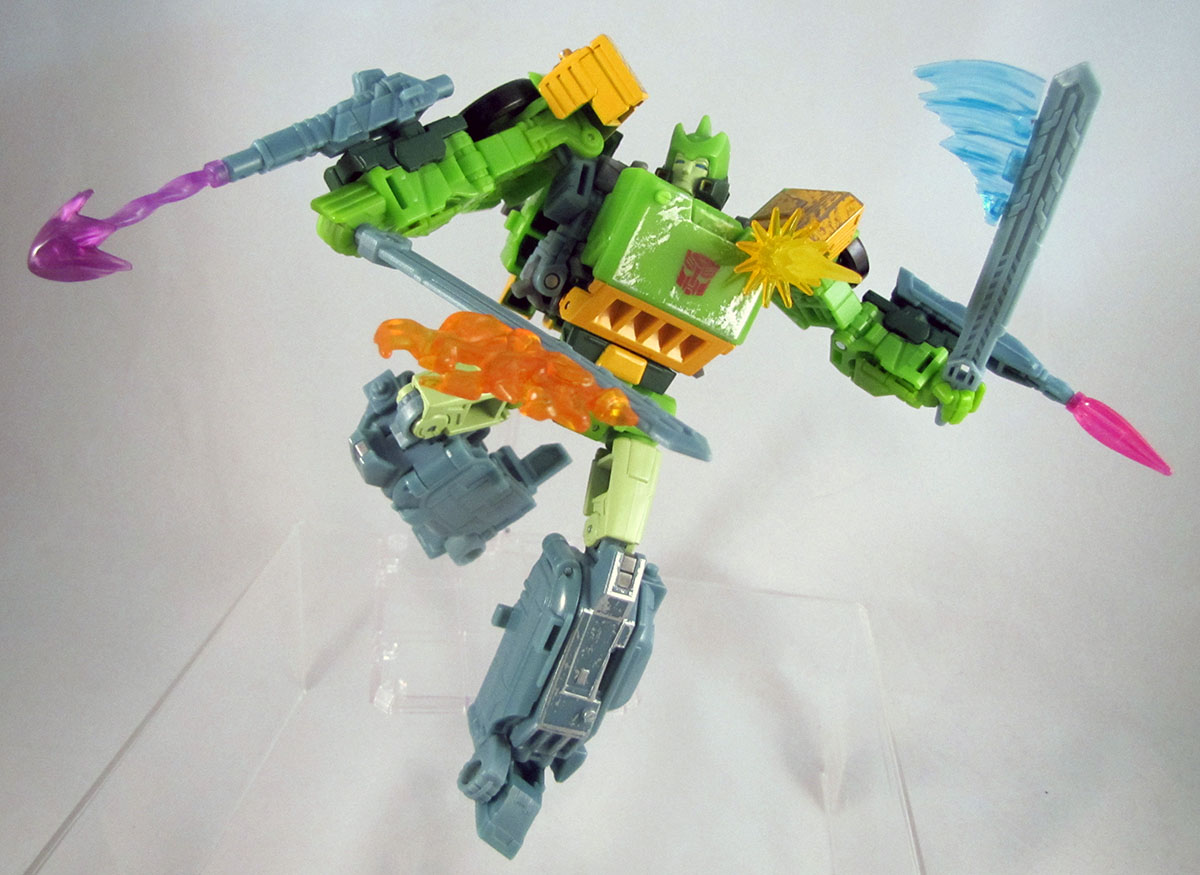 Springer comes with quite a few accessories, which is surprising considering how much Stege's gimmick is "buy these other toys to arm your other Stege toys."  His helicopter blade splits into three pieces -- two swords and a connector piece.  He also comes with two guns which combine into a longer gun.  You could probably get away with doing a Springer with just the swords in these budget-conscious days, but he comes with guns, too.  You can combine all the accessories together to make a larger cannon, though it's just the longer gun on top of the propeller connector with swords on the side.  Otherwise, he's got more weapons than he has hands, so I like to put the guns on his back, pointing upwards, to call back to his 2007 BotCon toy.  The propeller connector also fits back there, out of view.

He looks good using the effects pieces that come with the two Battle Masters that transform into swords. 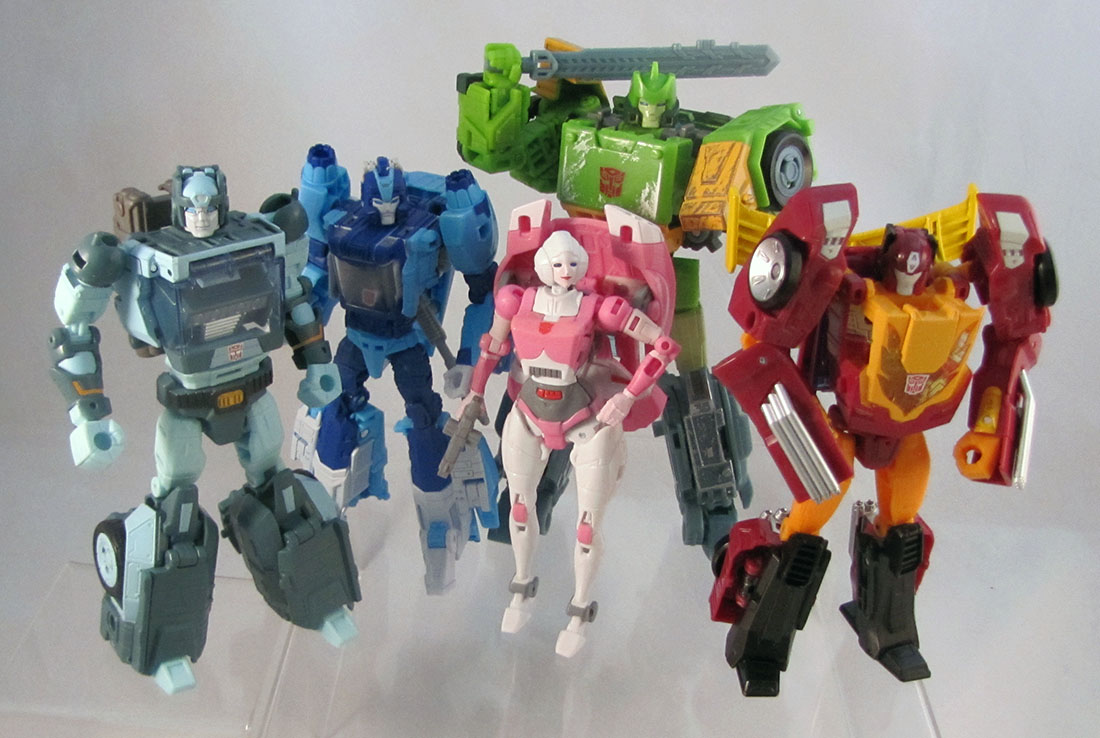