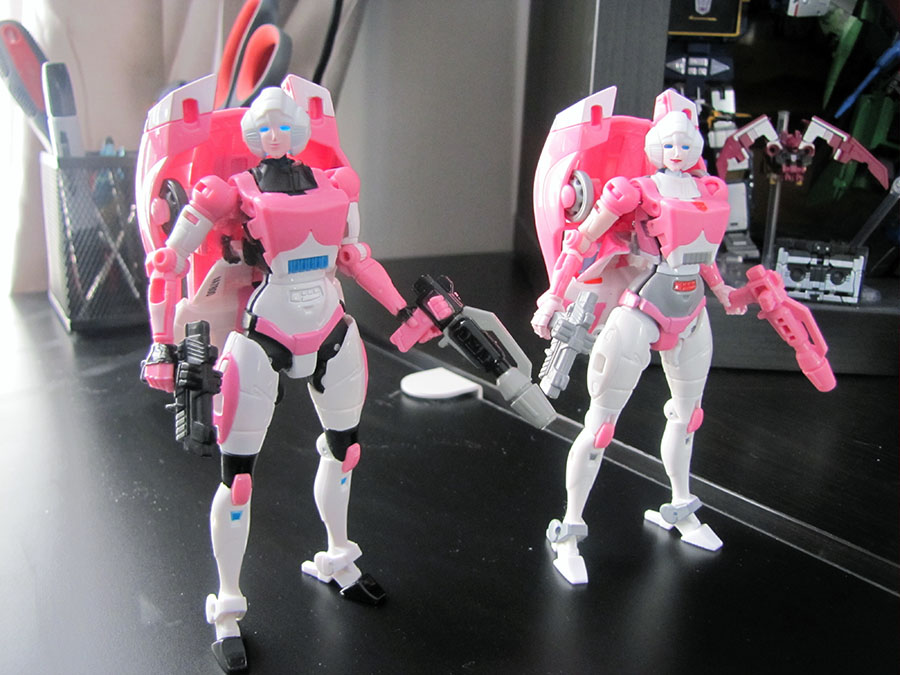 Lookit me, I got another Arcee.   The one on the right is Japan's deco.  She's the new one.

There are things I like about the plain ol' domestic version on the left.  I like the use of black, for example.  I think it adds a nice contrast color to her that gives her some visual interest beyond the kind of value-samey white, pink, and gray.  I like that the larger rifle is painted, which if you think about it is a bizarre choice, since why would Hasbro waste paint applications on the rifle?  99% of the time they leave weapons unpainted, since using up your paint budget on the actual figure seems preferable, but both of Hasbro Arcee's weapons have paint.  The smaller gun has just the sliver of gray, while everything that isn't a handle or a peg is painted on the larger gun.  And it's both black and gray paint, too.  (Okay, the larger rifle is pink if you don't paint it, and maybe Hasbro didn't want a pink gun, I dunno.)  Also the Hasbro one's like $15 domestic instead of $30 imported, so,  you know, half as expensive.

But those positives aside, and even though I thought that I'd always prefer the Hasbro deco, I changed my mind a bit once we got to see the TakaraTomy deco.  Since Finally Arcee's First Toy The Way Most People Would Define As Such is kind of a big 30th Anniversary event, I thought it might be worth it to splurge for the "deco the way the designers intended," aka slavishly adherent to the original cartoon colors.  And while import Arcee's larger rifle remains unpainted, there's a lot of stuff I like about the robot's deco that's a fair trade to me.  For example, the paint wraps all the way around her torso instead of ending abruptly at the seams.  And Hasbro's version looks like it was trying to avoid the whole "pink bikini" look by not painting the crotch of the pink bikini, but honestly it just looks like a crotchless pink bikini without that deco there, so, um, whoops.  The gray lower midsection is more cartoon accurate AND its relative darkerness obscures the uncanny-valley organic round tummy-with-a-bellybutton the sculpt has.  So that's nice.

Anyway, I felt okay splurging because this toy was surprisingly fun to own.  When I preordered her and Chromia, I expected Arcee to be kinda whatevs and Chromia to be the fuckin' bomb, but in person Chromia's remolding makes her a chore to deal with and Arcee's fun.  Shellformery fun, but fun nonetheless.  And so I'm happy to get the more expensive version.  Her toy's a milestone, after all.

Plus now I can steal the painted larger rifle from the Hasbro one to give to the other!  Best of both worlds!   (And eventually scrape out the support struts from inside the new one's palms so she can hold her weapons non-ridiculously, to match what I did with the Hasbro one.)