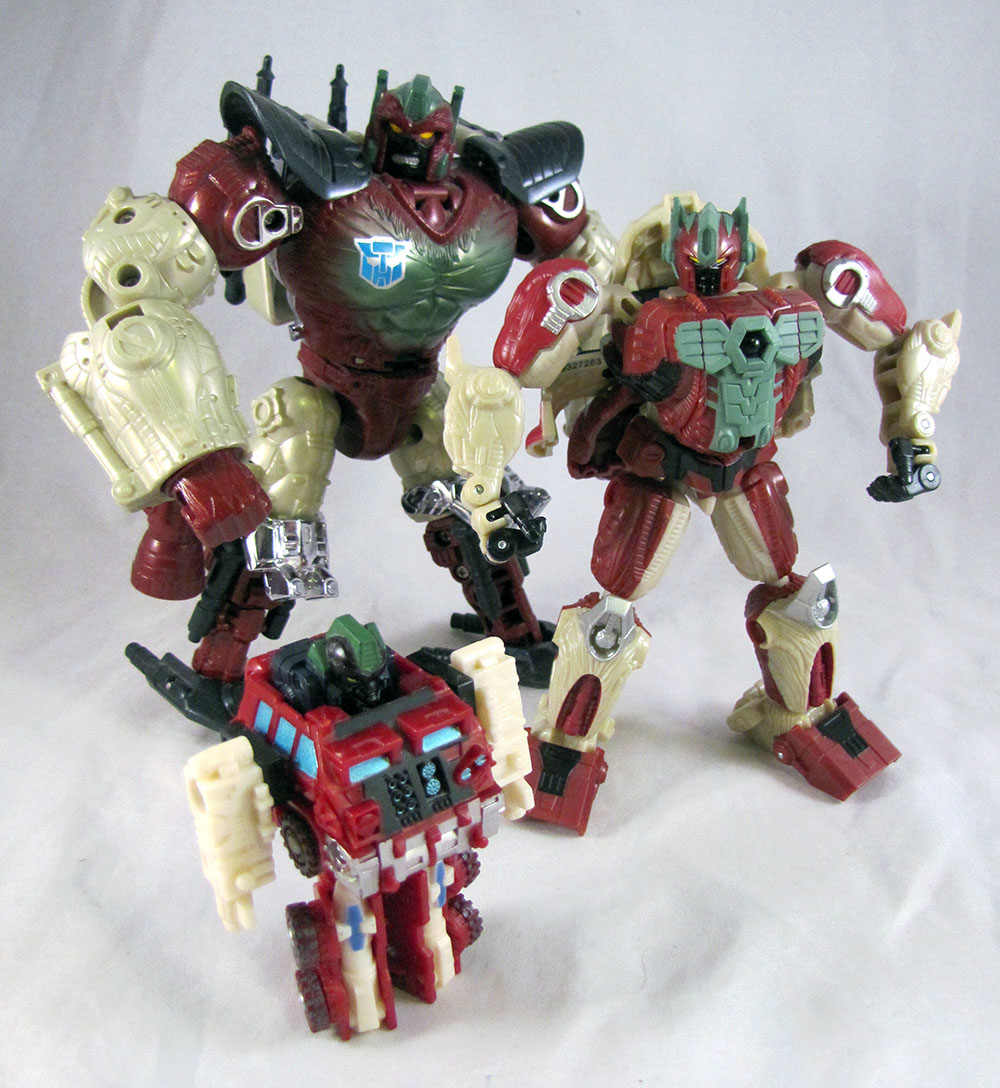 Awww, it's new toys of my favorite early Aughts BotCon characters!  Well, okay, Primal Prime was a retail exclusive, but BotCon used the damn toy so much in their stories he's kind of considered an honorary BotCon guy, I guess.  But Apelinq was definitely a BotCon 2000 dude, same year as Shokaract!  And this is his... third toy!  (He was also the head-and-chest of Sentinel Maximus.)  Whoof!

Primal Prime was this year's Customization Class toy, which means I assembled and painted him myself from off the plastic sprues.  That was my early Thursday of the show, removing parts from the sprue, shaving off the excess plastic, screwing and pinning things together, and eventually painting the dude.  I did mine according to the directions (because TFwiki needs pictures and I'm also a super nerd that way anyway) but he was free to paint however you wanted. 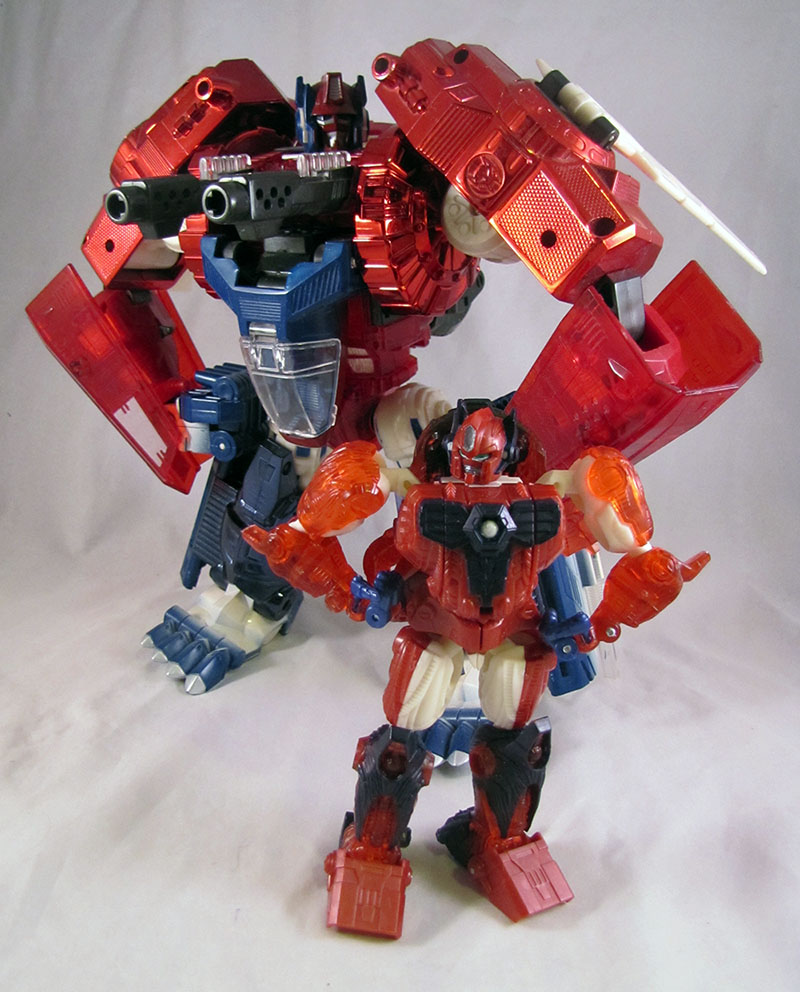 Oh, right, he's a redeco of the Beast Wars 10th Anniversary Optimus Primal toy, which they decided to give a Cyber Key gimmick to in case the BWX line didn't work out and they had to shove him into the then-current Cybertron toy line.  They ended up doing both, releasing him as Optimus Primal AND as a "Jungle Planet" version of Optimus Prime.  I've always had trouble transforming this guy, because you have to transform his robot mode chest in a certain order or it won't move between robot and beast mode positions.  But now that I've assembled the damn thing myself and transformed both Primal Prime and Apeline like a billion times (plus I brought my BWX Primal with me as an assembly reference), I think I've finally got the hang of it.  Phew!

Primal Prime is probably one of the prettiest customization class guys we've gotten.  I'm not usually super-up for translucent plastic, but it really works for him.  The whole thing is very striking once all completed, so I mind not so much that this is kind of a super body downgrade from his original form.  Whatevs!  It's pretty, I like it. 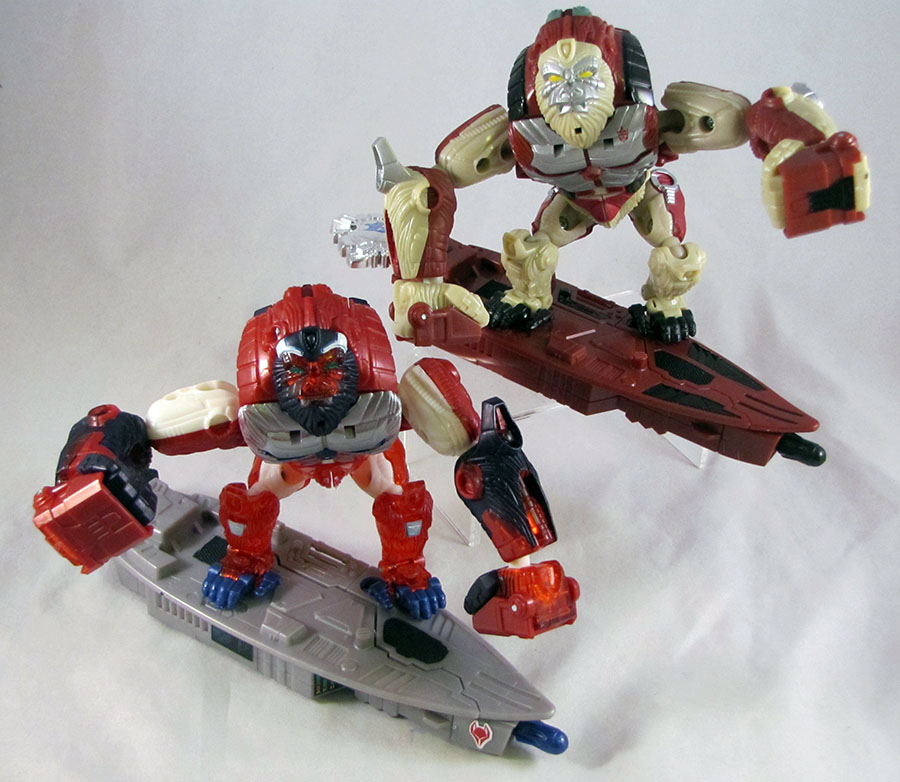 Apelinq was one of the at-show souvenir exclusives, and so he could only be purchased in a bagged set along with Alpha Trizer and Flareup.  I have some pretty strong nostalgia for the guy, so I'm happy to see him again.  Plus I strongly associate the character with Glen Hallit, so he helps make the year's set feel like a more inclusive celebration of BotCon history, despite the retrospective panel totally skipping the OTFCC years.

Both come with that obnoxiously large surfboard accessory which "transforms" into a giant missile launcher.  Oof.