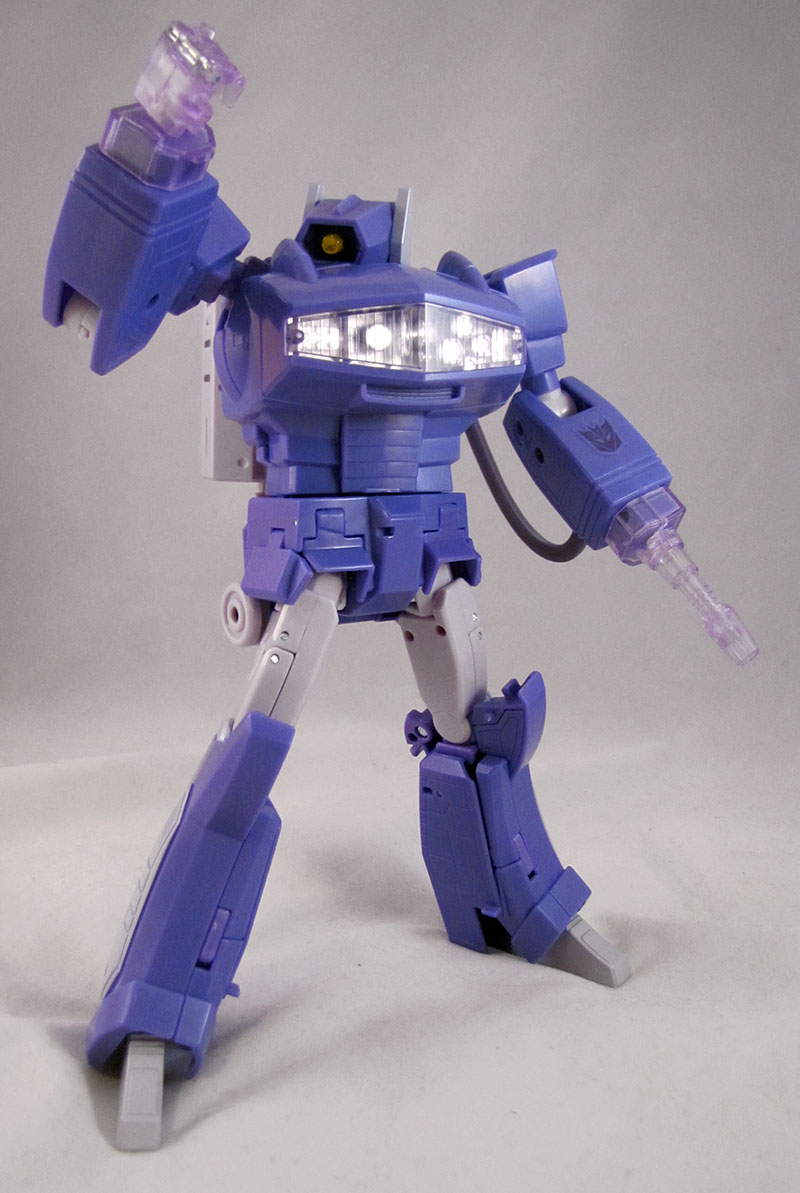 Gonna quickly scrawl this Masterpiece Shockwave review before I head out later today to the airport on my way to Seattle!  It's Emerald City Comicon weekend!  You can find me at booth 112 with Cyanide & Happiness.  It's also BotCon weekend, but I made my choice between the two.  I'm still gettin' the toys (through my buddy who's going), so I'll have them to talk about shortly after I get back... which explains why I gotta get this Shockwave post done first!  It won't happen if I have a bunch of new Beast Wars combiner guys!

AND YOUR FIRST THOUGHT WOULD BE RIGHT, BUT WHO CARES, MASTERPIECE SHOCKWAVE IS PRETTY DAMN GREAT 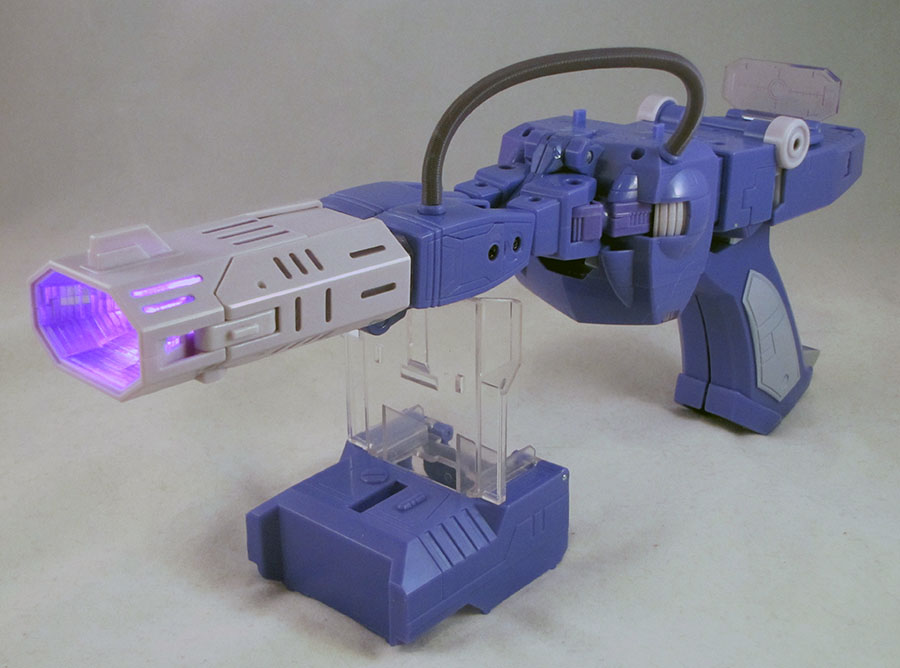 I love this guy.  And admittedly a huge part of that is "I love Shockwave," but I swear the toy is objectively cool besides that.  He still transforms into a purple space gun, and he's still a one-eyed one-handed dude (unless you give him his alternate extra hand), and he's still electronic.  It's only lights this time instead of lights and sounds, but I'm pretty cool with just the lights.  I have twin boys.  I'll have enough toys that make noise soon enough.  The lights are real strong, too.  He really glows (and has separate batteries for his gun-mode light and his wrist-gun light). 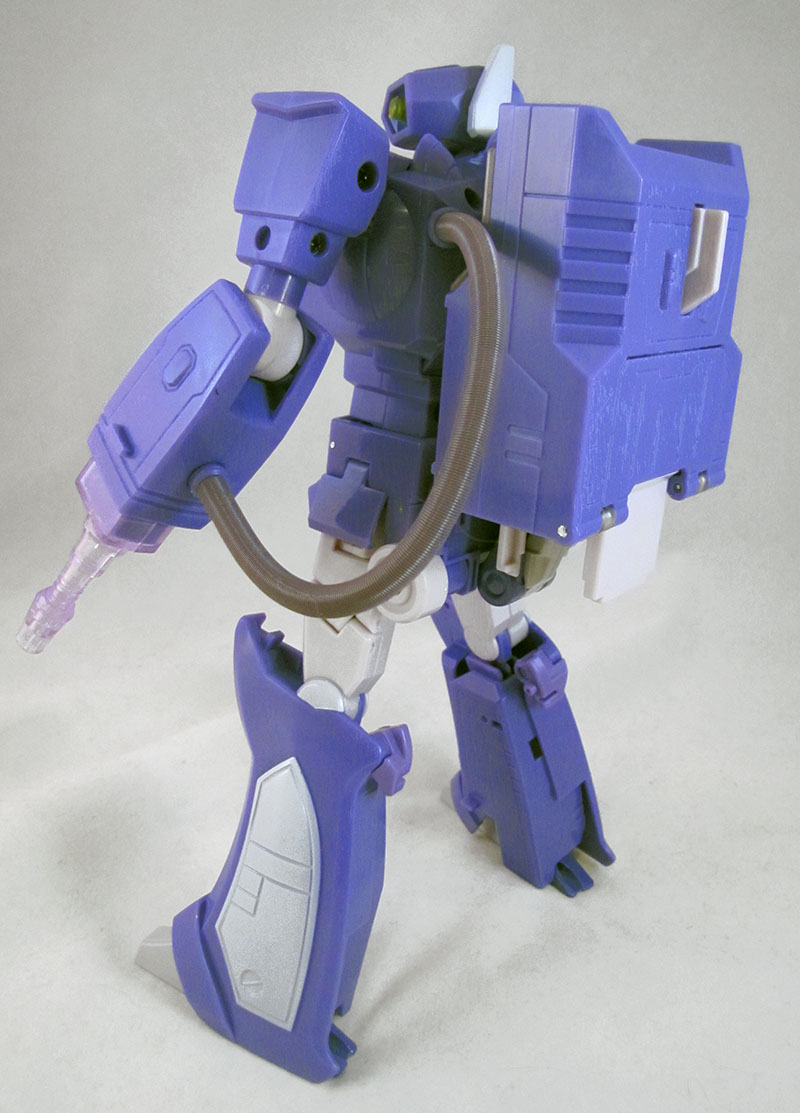 Masterpiece Shockwave transforms a little differently this time around.  I mean, it's 80% the same.  He puts his arms over his head and bends over.  You can't really change that if you want a Shockwave that looks like the original Shockwave in both modes.  But now the designers decided his barrel wouldn't be a separate piece you kept aside in robot mode.  Now there's a long die-cast arm that folds up and places the barrel on his back.  Meanwhile, the part of the gun that USED to be the part that USED to fold up on Shockwave's back folds down and bolsters up the bulk of Shockwave's legs so they aren't so half-a-gun-handle thin.  Oh, and there's a weird garage door of abs that slides down and covers up his trigger penis.  Other than these changes, it's the same transformation.

If you're upset that Shockwave's backpack is no longer purple and looks like his old gun barrel, there's a separate piece you can slip over the new backpack to make it look like the old backpack.  Pretty silly, admittedly!  But it also doubles as a stand for Shockwave in gun mode, so at least it has a secondary purpose.  Speaking of silly, Shockwave also comes with a small handheld version of himself in gun mode, because there was once an episode of the cartoon where Shockwave fired a small handheld version of himself.  As you do. 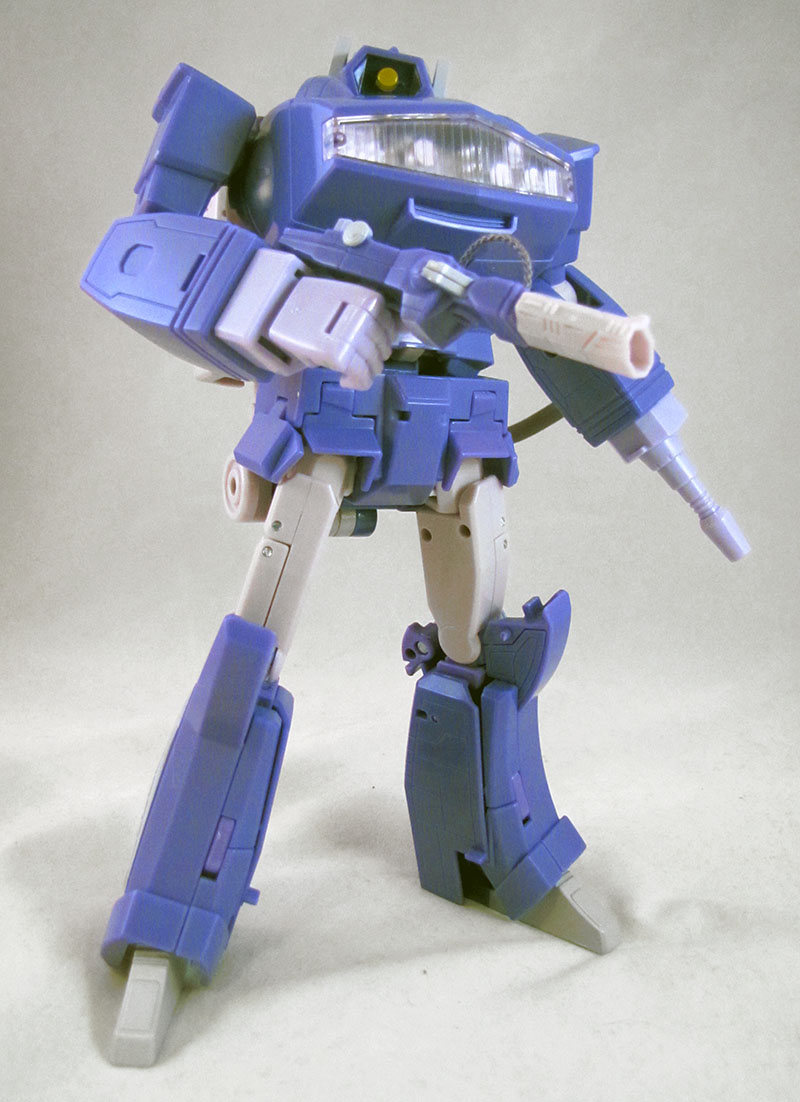 And finally, Shockwave comes with a large assortment of various hands.  He's a got solid lavender hand and gun-hand.  He's got a solid lavender replacement hand for that gun-hand in case you want to revisit that one time he was drawn in the cartoon with both hands.  He's got a saluting right hand so he can salute.  And he has ALL OF THESE THINGS AGAIN also in translucent plastic to match the original toy and also facilitate the electronic lights.  There are choices, is what I'm saying.  Like how you can choose between stickers of the proper Decepticon logo and the dorky misdrawn one from the cartoon.

Much ado has been made about Shockwave's purple coloring.  In some photos it's looked kinda pinkish, while some folks pine for the dark purple of the original toy.  I can tell you that in person, his color... well, it's hard to explain.  It's a very deep purple, but not a dark purple.  It's essentially Shockwave's color of purple from his old Action Master toy, but milkier.  I don't mean "milkier" in that it's whiter, but that it absorbs and reflects light in a certain way.  It... really absorbs light.  How the purple looks is drastically altered by the lighting ambience.  It's difficult to photograph.  Sometimes it looks really different just from photo to photo in the same lighting.  Hell, if you want him darker purple, just stand him in front of something black.  But regardless it's a real attractive color in person.  Like I said, it's deep.  It's like he's carved out of purple milk chocolate. 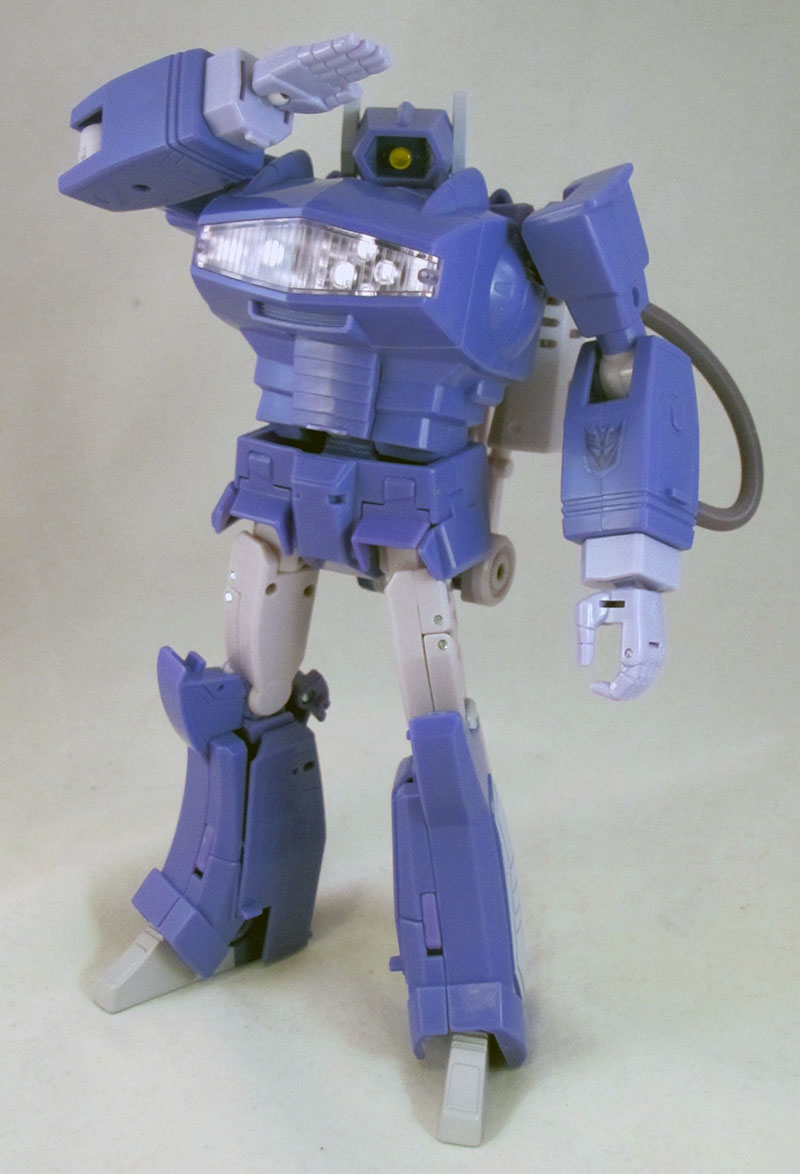 My one annoyance with the toy is the head.  You need to pull up on it (and the neck/collarbone section) to lock it into place in robot mode, but there's a real good chance you'll take the head off the neck balljoint instead.  And then you spend time trying to get a head to pop back onto a balljoint that's affixed to a swinging hinged piece from which you can't hold in place.  You know how it is.  I recommend grabbing the head from all corners and pulling directly up, keeping the head looking forward, when you try to lock it in place.  That generally keeps the head from popping off first.

And it makes you wonder if Senator Shockwave also transformed into a flying laser gun.