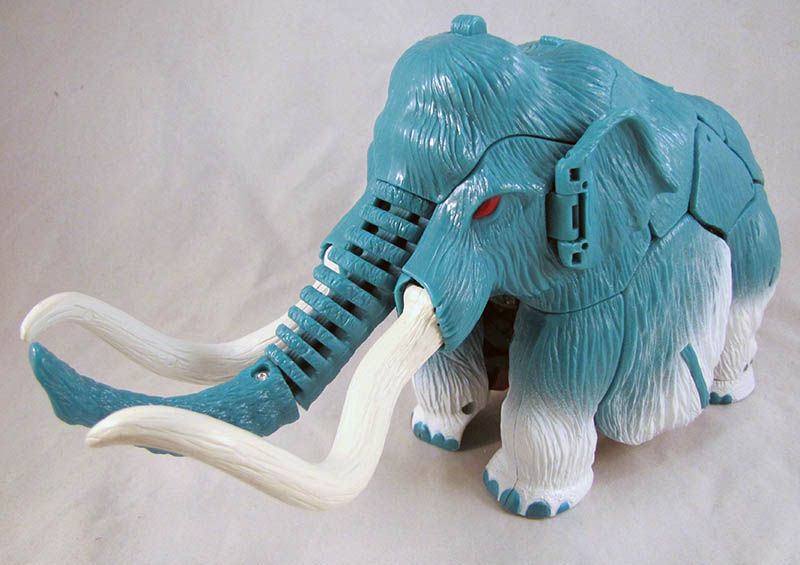 I like Beast Wars a lot, in case you haven't noticed.  So when the six Transformers Collectors' Club Subscription Service guys were announced at last year's BotCon and one of them was a redeco of Big Convoy in Ultra Magnus colored named "Ultra Mammoth," I was abnormally excited.  You know, given the circumstances.  It's a redeco of Big Convoy, after all, who's kind of a pile of mammoth parts loosely attached to a robot.  But it was a new Beast Wars toy, with a new name!  Exciting!

It was the new name that gave me hope.  He was "Ultra Mammoth" and not just plain ol' "Ultra Magnus."  Obviously, he was a new guy like Optimus Primal's a new guy and not Optimus Prime.  Obviously!  But, ha ha, no, eventually we'd discover that he was indeed just Ultra Magnus.  Silly David and your stupid hopes and dreams.  But what really took me for a trip was the eventual reveal that he wasn't even in the friggin' Beast Wars.  Instead, he's native to the Shattered Glass Universe, or is at least "our" Ultra Magnus after crashlanding in the Shattered Glass Earth's past with a bunch of other Generation One guys who fight in a completely different war.  For reals, it was just a bunch of G1 guys fighting, like always happens whenever somebody gets their hands on the Beast Wars franchise.  I mean, it's nice that it's not mucking around with the "real" Beast Wars and doing its own separate thing, but it's still not really something I want to see. 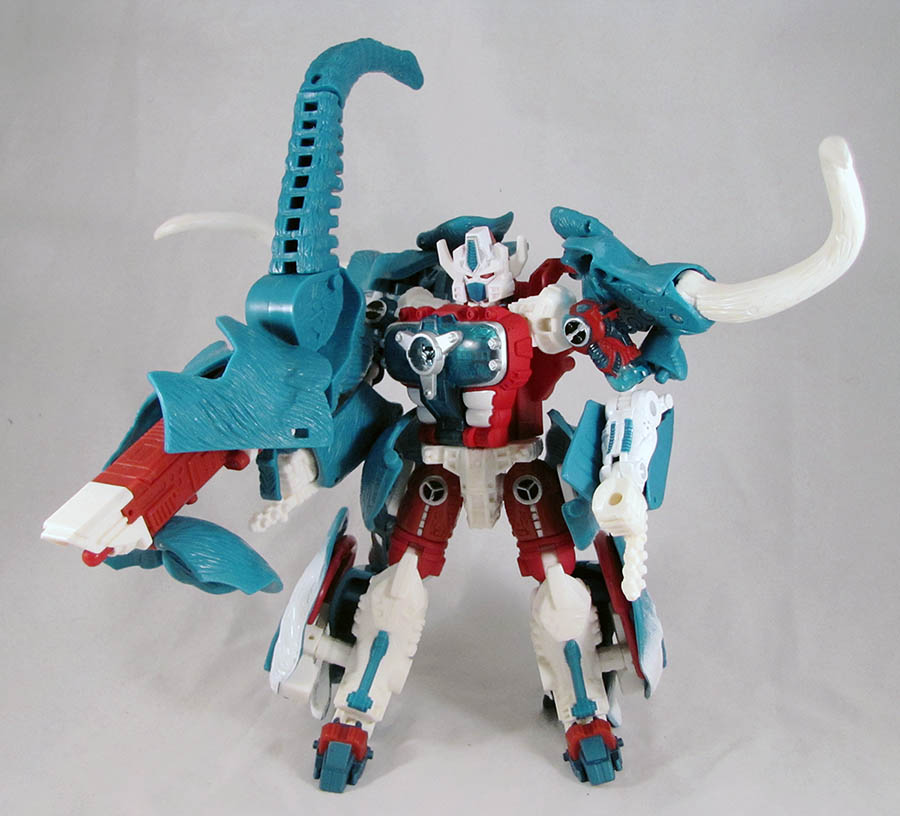 (I do want to see it DRAWN like that, though.  Matt Frank draws the best beasts, expressive yet ferocious.)

Long story short, I wanted to rescue this toy's potential -- in my own mind, even if nobody else cared.  I just wanted a new Beast Wars guy.  And so I decided I'd draw a story about Ultra Mammoth being a new guy.  Nothing about how he has to rescue the universe or anything, and nothing with all of the weird claptraps that modern Beast Wars fiction has fallen into.  My Ultra Mammoth was going to be a newborn protoform, as was originally intended with stasis pods, before the stasis pods became the means for writers to inject more G1 dudes into the Axalon crew.  (When your random Maximal exploration ship somehow includes Grimlock, Soundwave, and one of two distinct-but-simultaneously-existing versions of G1 Prowl while the other G1 Prowl and G1s Silverbolt, Ironhide, Ravage, and Starscream are already involved, there might be a problem here.)  I also wanted a story where a stasis pod landed and its inhabitant actually does what a Maximal protoform is supposed to do -- scan an indigenous life form and do science. 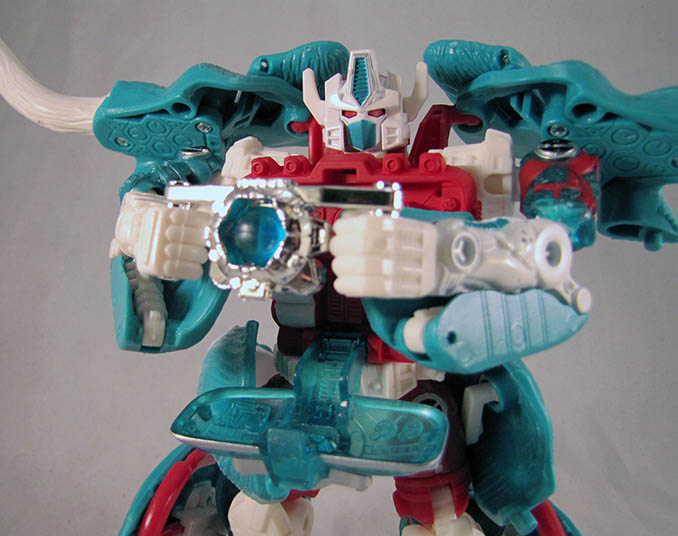 (Also I threw in Waspinator, because I like stories that involve/advertise toys currently on shelves, plus both had fates of ending up alone on a planet, so that felt like some theme cohesiveness was built into the pairing.)

I hope everyone liked the story!  I'm sorry it took over Shortpacked! for two and a half weeks -- I knew that if it didn't publish in public where there was a very visible deadline each night, it would be something I'd never finish.  Ultimately, I just wanted something different hammered into my brain when I saw this Ultra Mammoth toy, something that reminded me more of Beast Wars.  You guys kind of got corralled into this like so much colateral damage.

The toy itself is, as mentioned briefly above, the Big Convoy mold, for better or worse.  It's a sizeable thing with many, many parts, and a Beast Wars Neo toy, so you know those many parts are going to annoy you at times.  The new color scheme is very attractive, even if it's just the original Ultra Magnus toy colors mapped onto this thing.  A blue mammoth rides that sweet groove between dorky and beautiful. 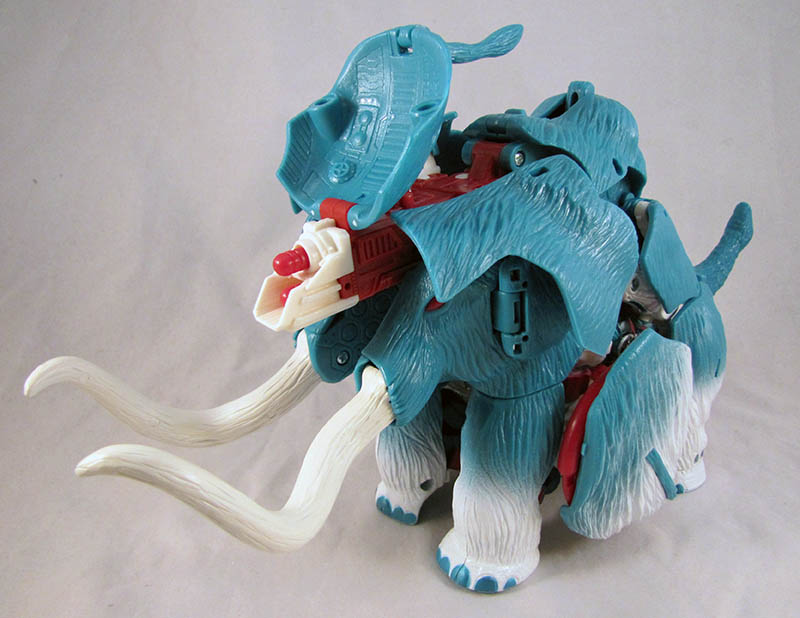 The harpoon missiles which holster in his legs have sadly been remolded.  They're now thicker all around, which means they don't fit inside him any more while in beast mode.  They click into the launchers fine, but there's not enough room inside him in mammoth mode for them to fit.  Other than that, this mold doesn't show much age, even though it's fifteen years old.  My Ultra Mammoth's elbow joints are even strong enough to support his massive trunk gun, which is unheard of.  Usually you gotta rest it over his shoulder.  He still has that wacky third mode where his mammoth mode grotesquely opens up into a cannon, and his tusks still wiggle when you pull back on his ears.  The rubber in his trunk is a little stiffer than in earlier iterations of the mold, so pulling on the lever at the top of his head doesn't cause the trunk to curl as much as it used to.