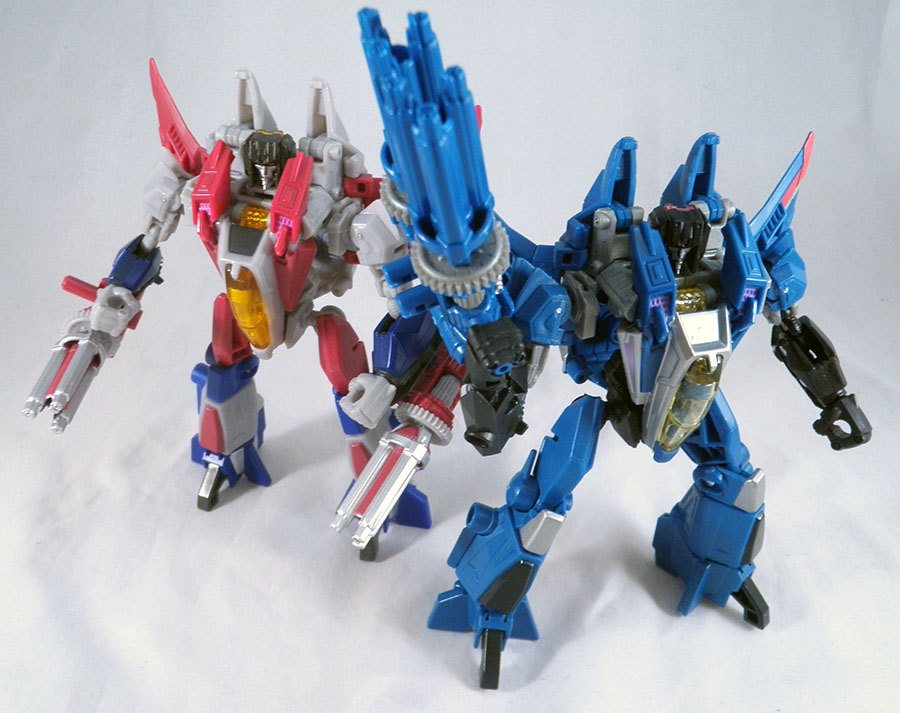 Hold onto your butts.  We're about to get painfully nerdy in here.  We kind of have to, because I don't know if I have enough words otherwise to bury two photos of a simple and predictable Seeker redeco in.   It's Thundercracker.  He's a blue and silver Starscream again.  Let's move on.

War For Cybertron Starscream is technically a toy of Aligned Starscream, right?  Sure, the War for Cybertron aesthetic is blocky and having-a-nose-y enough that he can pass for other version of Starscream, and sure enough a bunch of the WFC designs were borrowed for the ongoing Robots in Disguise comic which is a Generation 1 book.  Some folks don't cotton to the idea of stylistic choices varying so widely within a continuity, and so they're happy to ignore the whole Aligned angle and just consider him G1 since he looks G1y enough to them.

There was also a Thundercracker in War for Cybertron, and now there's a toy basically in those colors as Thundercracker.  He's being released in the same line as WFC Starscream, but only after the focus of the line shifted from WFC to a G1/Classics approach.  And since these toys are being packaged with comics, specifically comics which were written to these toys, thus placing the WFC Thundercracker design in this G1 world as G1 Thundercracker, he isn't even ambiguously a WFC toy, even though he's still sort of repurposed. 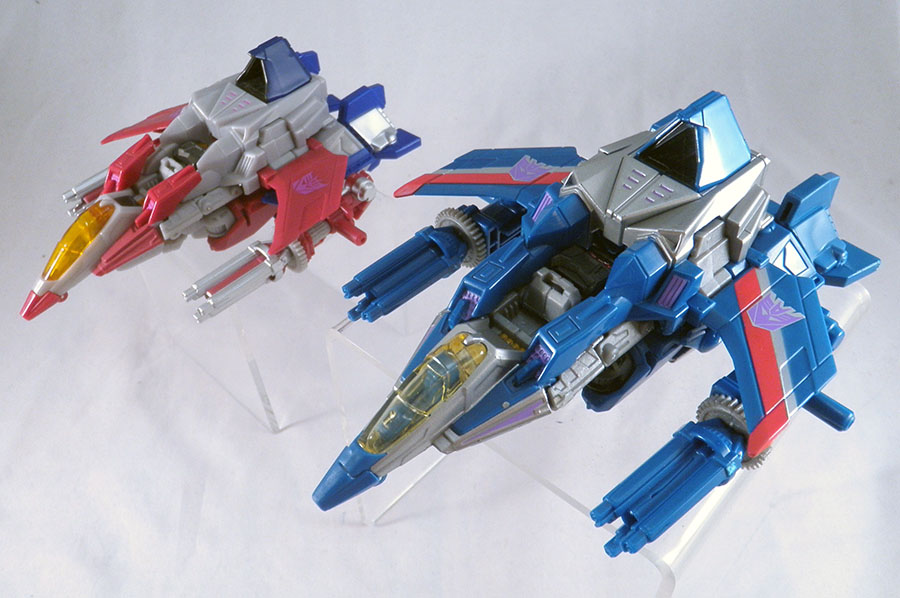 Here's the wrinkle that I've been mentally picking at.  While the Deluxe Class toys in this portion of the Generations line come with IDW comics featuring those characters, the packaging bios mostly ignore the IDW comics' specific interpration of these characters, content instead to rehash the original tech spec bios from the eighties.  Swerve is a guy who doesn't drive so good instead of being a insecure bar owner, for example.  The packaging presents the "original" version of the character rather than the version currently-appearing-in-fiction.  We're getting a new Armada Starscream toy and the Generation 1 comic books are gong to use that design for its G1 Starscream character.  However, if the pattern holds, the bio on the package will still talk about Armada Starscream rather than G1 Starscream.  The packaging will claim the toy is a different iteration of the character versus the comic inside. 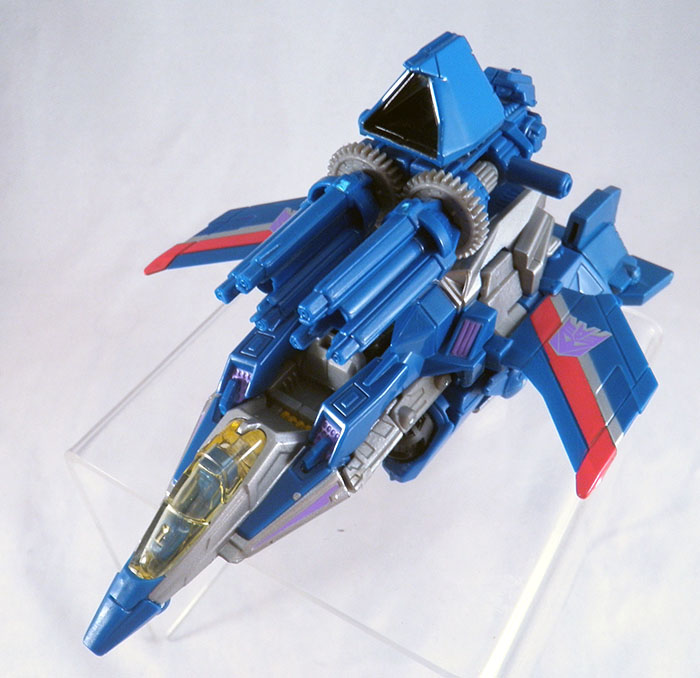 (I wouldn't expect the writer of this bio to know that Takara's Prime Thundercracker toy's bio takes the character in a different direction, nor would I expect him to feel bound by it.)

What I'm getting at is that this is likely a toy that comes in packaging which claims it's two different versions of the same character, much like everything else in the line, but with Thundercracker there's no outward way for us to know that, because of things.

And that fascinates me.

Because I'm a weirdo.

I tell you what, I did not care a lot about Megatron's new stealth bomber body when it was introduced in IDW's first ongoing Transformers title.  I mean, I didn't hate it.  It just kind of existed.  It was  undoubtedly a thing, just not a thing I gave a lot of thought about.  And it had a big M on his forehead, which I'm not sure if I love or hate for its goofiness.

But then Hasbro decided not only to make a toy of it, but to also commission of comics about the toys they were making to include in the packaging.  And so we got this amazing comic book both written and illustrated by Nick Roche.  I wish Nick Roche would write more.  Hell, I wish he would draw more.  .... while he writes.  He also both wrote and drew Spotlight: Kup, which is another fantastic Transformers story, easily one of the best.  The connect between what the story wants to do and what it actually does is strong.  Not an inch is wasted.

You might roll your eyes at a "Spotlight: Megatron" issue because, yeah, oh boy, FINALLY, there's gonna be a focus on Megatron, leader of the Decepticons, ABOUT TIME, but the comic book lives up to and exceeds your expectations.  We see Megatron returning to life in a new body amidst his crumbling army, and we see how we begins to build that army back up again.  He has a way of things, a formula, and center to that formula is Starscream.  However, Starscream's as much in shambles as the rest of the Decepticons, and so Megatron literally spends the issue beating Starscream back into his usual self again.  And Jesus God, is it slashy, and not in a kind way.  By issue's end, you have a perfect idea of how Megatron's brain works.  It's brutal, but amazingly executed.

ANYWAY NOW I CARE A BUNCH ABOUT THIS PARTICULAR MEGATRON BODY I GUESS.  Thanks, comic.  Stupid excellent storytelling.

Stealth Megatron is a Deluxe.  This means he's on the small size for towering over much of your collection as he should, but there's a Starscream who's arriving on pegs at the same time who is just about the right size relative to him.  Legends Starscream is also an IDW comics design, but a discarded one that was never used for Starscream himself (just Thundercracker).  Also, this Starscream comes with a tiny Waspinator partner/weapon.  I'm just piling on the reasons to own these things, aren't I.  And so I've been having my Deluxe Megatron smack my Legends Starscream around my desk since Megatron arrived in the mail.  They're a good pair.

Despite Stealth Megatron's Deluxeness, he's pretty meaty.  His arms have a great mass to them, and he just looks like this intimidating chunk of dude who could mess you up... so long as you don't put him next to anybody else in his size class.  He transforms by bunching up into this pentagon-shaped thing, and then you tear his arm cannon in half and plug them into the ends for wings.  It's a little complicated and messy the first time you try it, but on the second tries and beyond it gets pretty simple.  The learning curve is fairly short.

And of course the comic book comes with it.  If you don't own the comic book, pick up the toy just to read it, dammit.  (Or here it is on Comixology.)
Tags: generations, megatron, starscream, waspinator, thrilling 30
View/Post Comments
Why can't you be cool like me?
Posted May 14, 2013 at 12:41 am
("He ends most of his speeches that way.")

Hey, everyone, let me introduce you to The Perfect Springer.  And, no, actually, it's not because he's a Triple Changer again for the first time in forever.  I mean, that's nice.  I like that.  It's cool.  But what makes him the super best is that he takes the bulk of his visuals from Nick Roche's Springer redesign for Last Stand of the Wreckers -- which, you know, is an awesome story, because I keep telling you that it is.

I would have been happyish with a based-on-the-old-cartoon Triple Changer Springer.  But Last Stand of the Wreckers Springer?  That gets me instantly to climax.  It is Boner City over here.  In four hours I'm gonna have to call a doctor.

Admittedly, this particular rendition of LSOTW Springer is taller and thinner than how he was rendered in the story itself.  He was a wide mass of dude in that thing.  This toy is thinner than that, though still, you know, not being a stick.  It's probably one of those sacrifices you gotta make because of physics, as this guy has two altmodes to transform into, and if you bulk up his legs you kind of end up with a fat car and helicopter.  His proportions do resemble more Roche's original control art, versus Springer's actual appearances.

There are some other changes to the design for this toy, but they're ones I'm satisfied with.  Mostly, it's that his altmodes look less made-up vehicle-y by a smidge.  Springer's new car mode looks a lot more like a car versus a four-wheeled vehicle of some undetermined sort.

Let me tangent here: Man, what the hell was with original 1986 Springer's toy, anyway?  I'm not sure that thing is a real Triple Changer.  It has a robot mode and it has an okayish helicopter mode, but his car mode is just the midtransformation step with the propeller removed.  It barely pretends to have rear wheels.  What an awful thing.  And how awesome is it that this new toy has three distinct modes that are all great?  I mean, even the shape of the windshield changes.  Looking at either vehicle mode, you couldn't tell at a glance that it has a second one.

Springer doesn't have any engineering hurdles like Blitzwing's shoulders.  He's, as I've been saying, pretty damn perfect.  The only part of the transformation that gave me pause was how to attach the gun under the cockpit in helicopter mode.  The instructions just give you an arrow and the words "ATTACH WEAPON."  Well, yeah, great, but HOW?  Apparently there are some... notches?  I just kind of use excessive force and some shapes that look like they complement each other eventually snap together.

The propeller spins very satisfactorily.  And it transforms into a believable sword seamlessly.  It's not that giant plank of wood on a peg the original toy had.  I'm impressed at the amount of articulation he has, too, despite the engineering demands.  He has a turning waist and even though his hands bury inside his own forearms while transformed, he still has articulated wrists.   Voyager Class is also the perfect size for a Springer -- dude was larger than everyone else in the cartoon (he was Optimus Prime/Rodimus Prime's height), and in the comic he wasn't no shrimp.   So he'll look right next to a Deluxe Hot Rod, Kup, or Blurr.

you will buy this