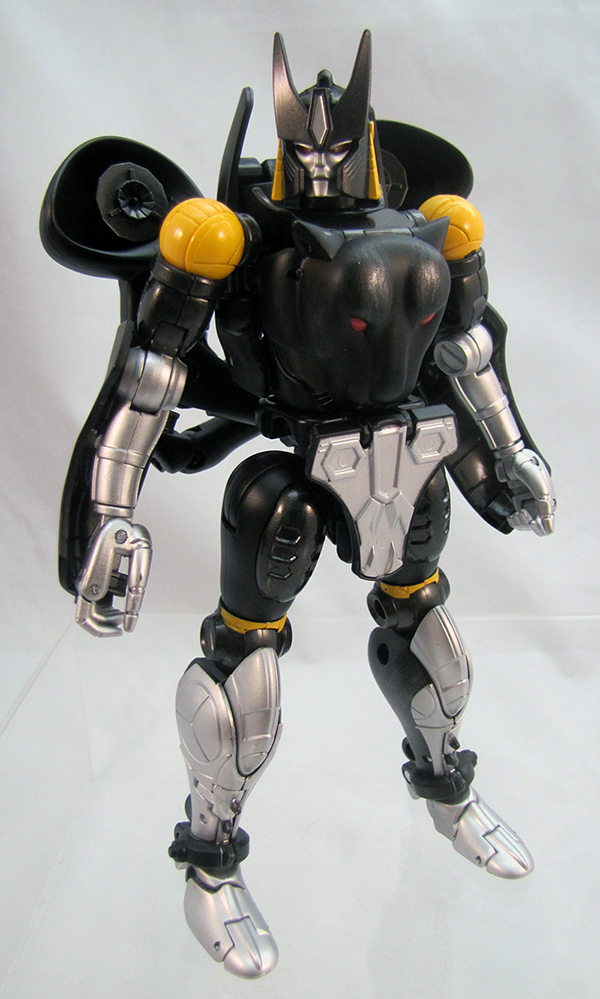 This guy is Ravage!

You can't convince me otherwise.

Ravage used to be one of those Transformers characters who had twice the toys of any other guy just through his involvement in Beast Wars.  This was, you know, before Generation 1 stuff made a comeback and you started getting Optimus Prime and Bumblebee toys on the reg.  But Ravage had a bunch!  He had his original toy, and he had the Beast Wars Metals toy, and he got Tripredacus Agent, and he got that McDonald's panther dude, and he got two friggin' Alternators, and he got Shadow Panther. 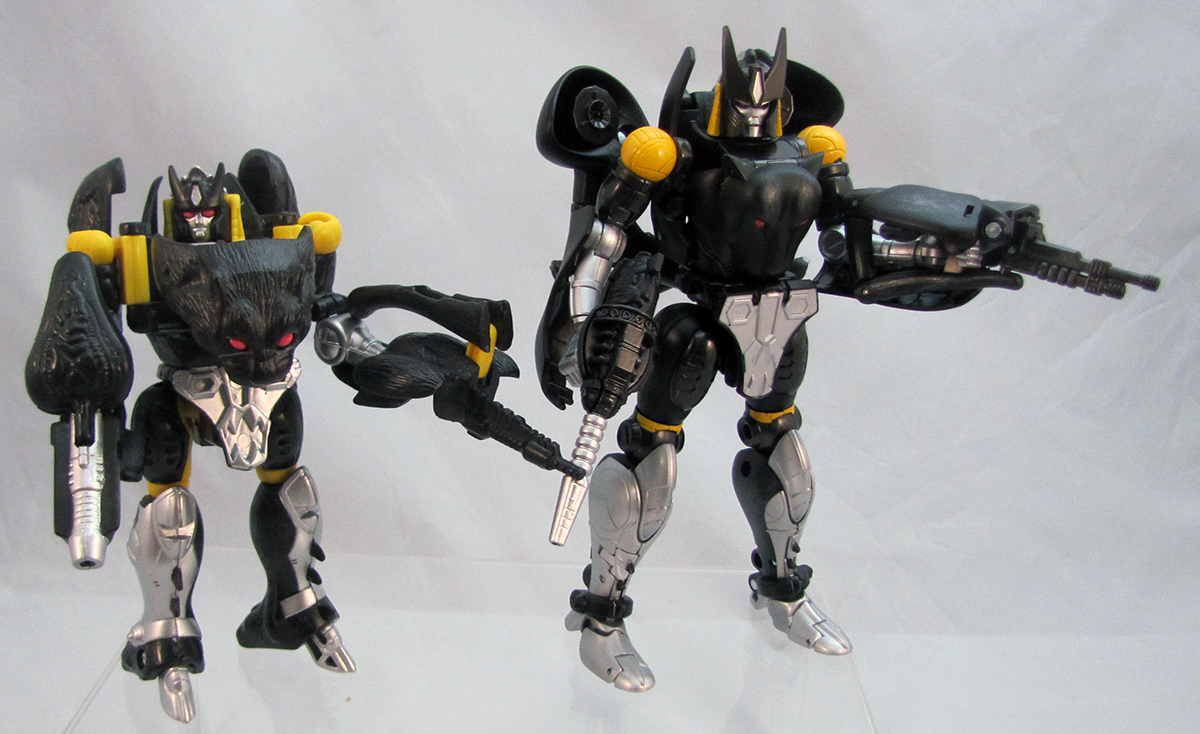 Sure, Shadow Panther wasn't Ravage in Japan.  He was just a black Cheetor redeco to fill out their line.  Give Rhinox somebody to be packed with in a versus set.  (Takara liked to do versus sets in addition to their single-pack toys back then.)  He was a "disguise warrior," which I'm guessing, knowing absolutely zero Japanese, is just a bad translation of "undercover agent."  (G1 Ravage was a saboteur.)  Shadow Panther had to be an undercover agent because back then, Maximals were, you know, mammals and birds and such, while Predacons were evil bugs and dinosaurs.  And so a Predacon panther would have to be one who's pretending to be a nice panther.

But Ravage showed up in season two of Beast Wars, and Hasbro was all, "oh hey guess what, in lieu of an actual toy for this guy, we've decided this black cat guy we sell imported on our website is actually that Ravage, somehow."  I mean, they couldn't out-right call him Ravage.  In those days, someone else owned the trademark.  And so the official website called him "Tripredacus Agent," which was Ravage's role in the cartoon.  Later, Walmart would get a black and gold redeco of Transmetal 2 Cheetor named Tripredacus Agent, with a bio that continued to assert vaguely that he was Ravage without being called Ravage specifically, while also talking about all the previous jobs and bodies he's had, wink wink nudge nudge.  Ravage 3 Bodies Evolution indeed. 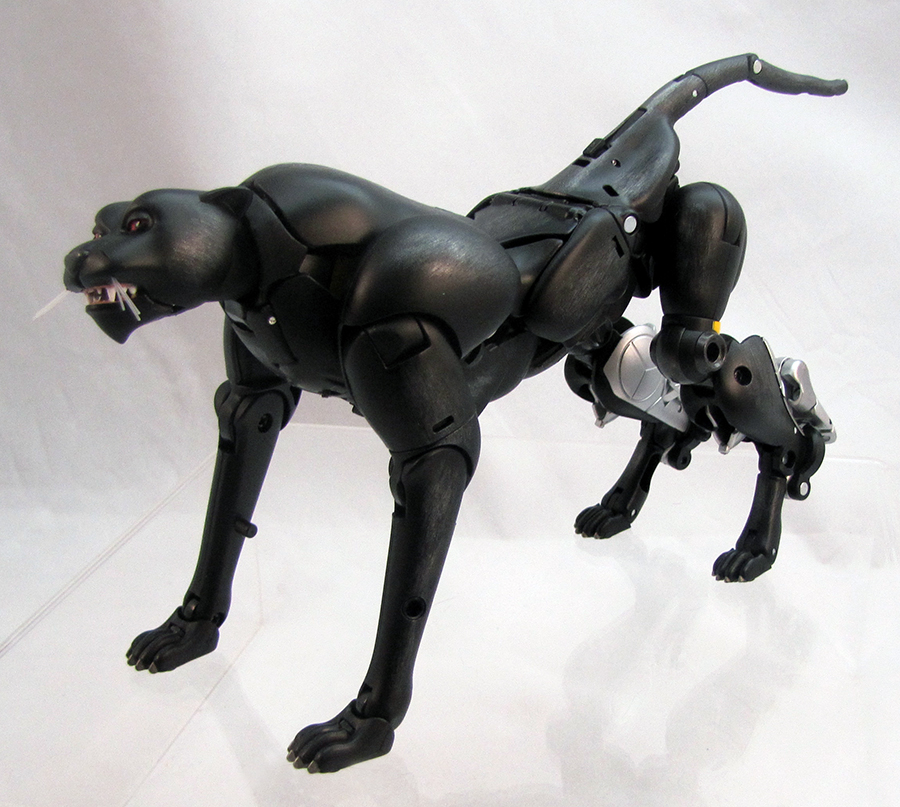 Since then, every damn body from G1 has inserted themselves into Beast Wars.  But in the late nineties, before that explosion happened, Ravage's inclusion was special.  It was a fun time.

MP Shadow Panther has a few accessories left out of Cheetor's release.  He's got the little communication device that he used in "The Web."  Two of them, actually.  One sized to fit on his robot arm, another to fit on his beast mode foreleg.  He's also got the "mutant head" that the original toy had but cartoon Cheetor did not.  It plugs onto the toy's face, rather than the head itself flipping over like the original.  All three of these pieces are chromed. 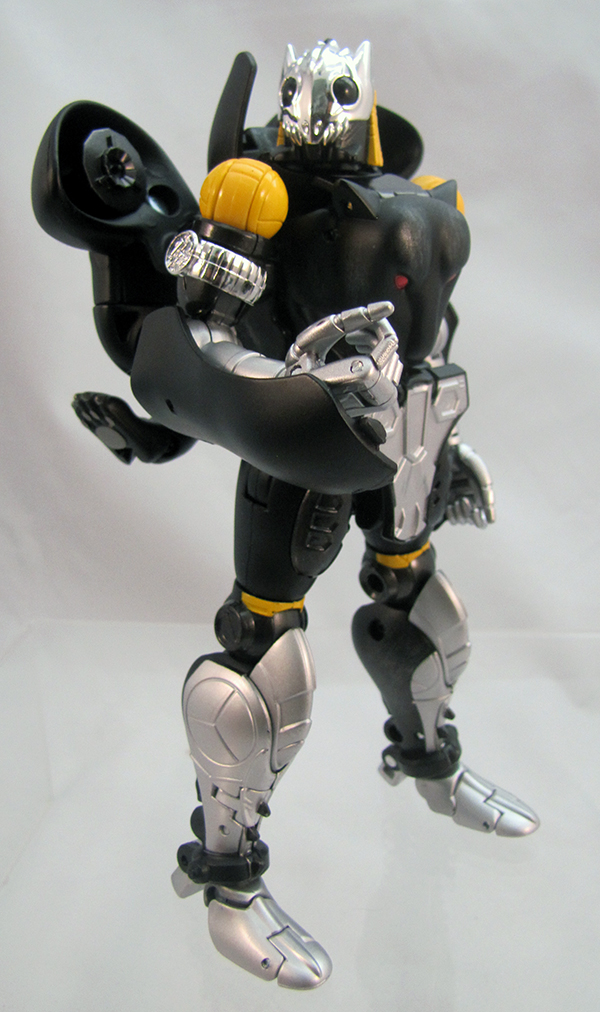 Shadow Panther is a little less extensively decoed than Cheetor.  Cheetor's a cheetah, and so 90% of him is covered in spots.  Shadow Panther is black!  I mean, he has some areas of his black deco that's also covered in some fur-like tampography, similar to MP Optimus Primal's, but it's not over every surface.

But he's Ravage, from back when being Ravage meant something unique and special, and so I love him.