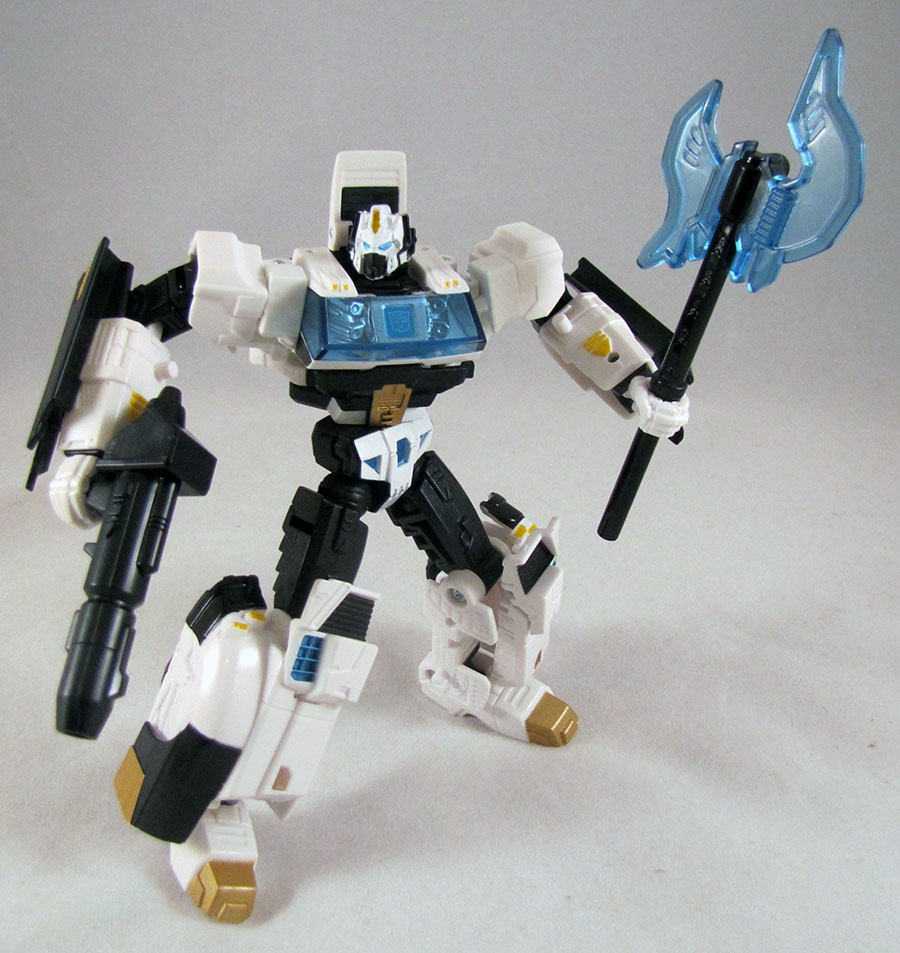 Nova Prime is an artifact of Cybertron's past.  He merged the ancient thirteen tribes into a united society, bringing about a new golden age... or, well, at least a new golden age for the folks Nova Prime liked best.  If you were a sweet battleready humanoid-type person like him, you didn't fare so bad.  But if you were, like, a beast dude or whatever, then you were probably not gonna like Nova Prime's new caste system.  History regarded Nova Prime as pretty awesome because of all the stuff he did, because folks who were happy with Nova Prime got to write history.  And so it came as a surprise to a few people when Nova Prime returned in the modern day and was amazingly evil, with a dark Matrix and everything and also he was calling himself Nemesis Prime.  You know how it is.  It'd be like if Andrew Jackson, that friendly dude from the twenty dollar bill, suddenly showed up, tried to destroy the universe, and changed his name to Jerkwad Jackson.  Some folks would be all "dude what the hell" but the rest would be all "yeah that makes sense."

Shortly, Nemesis Prime is a supremacist.  Some would say, looking at him, that he could be accurately described as a white supremacist. 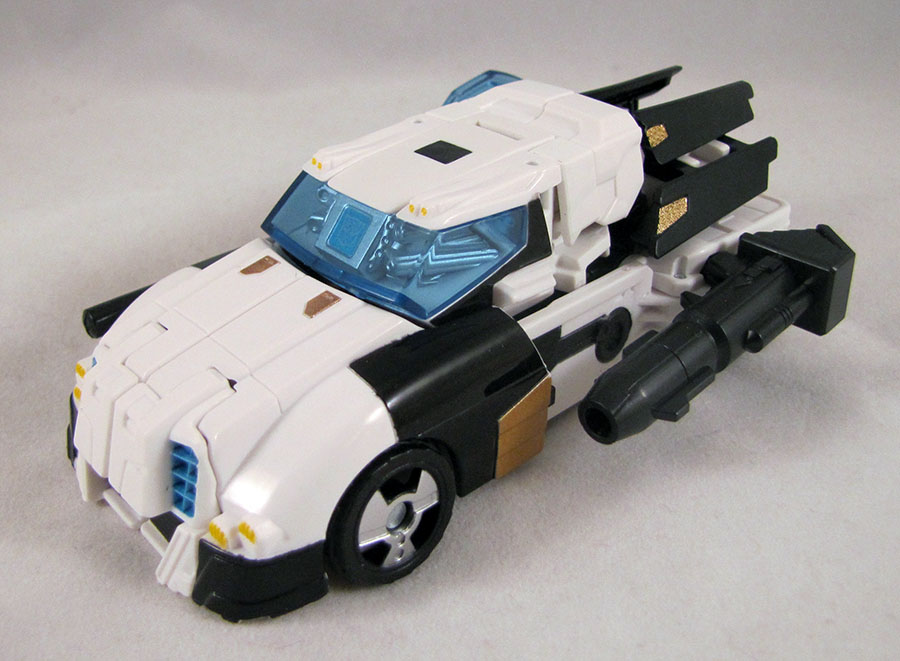 So this is super racist white supremacist Transformers Collectors' Club Nova Prime.  He's the Orion Pax toy from Generations a few years back, but in white and black and with a new head.  This toy was announced around while Dark Cybertron was going on last year, literally the day after I was looking at my display of Deluxe Shockwave and Deluxe Galvatron and an open spot waiting for Deluxe Jhiaxus, and wishing that there'd be some kinda Deluxe Nova Prime to fit in that spot.  I make things happen just by wanting them to happen hard enough, apparently.

Now, as of two days ago, I don't draw Recordicons nor do I do anything else for the back page of the TCC magazine anymore.  I totes quit.  So I'm gonna really tell you what I think about this toy, for reals.  No holding back, no hemming or hawing.  I am free to be completely honest with you, no strings attached. 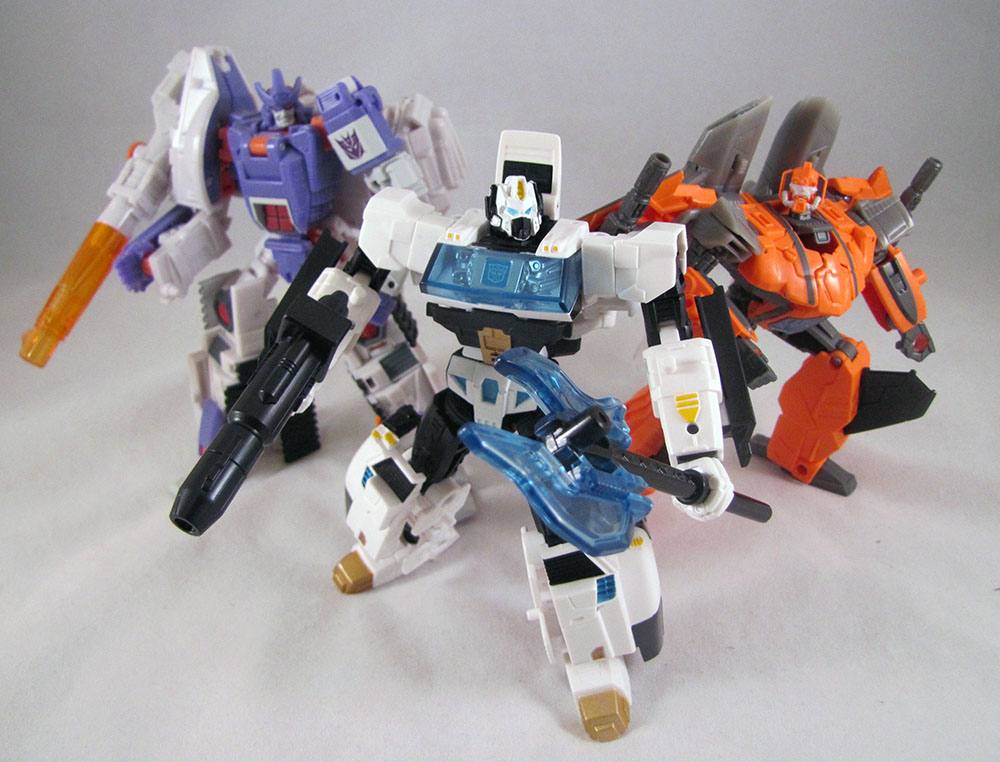 I really like it.  It's a pretty toy and the concept was executed well.  Some of the joints are a little loose, but I dunno if that's just mine or if it's everybody's.   The white with black and gold and a dash of translucent blue is engaging, plus it's a toy of a character who's never gotten a toy before.

There are rumblings that this Nova Prime toy is actually a stealth Shattered Glass figure.  Conjecture is floating around that at the end of this year's magazine comic, SG Optimus Prime will have been rebuilt into "Nova Prime" by SG Unicron, mirroring how Megatron became Galvatron in the animated film.  I will be a little pissy if that happens.  I'm an ornery nerd and I want my toys to actually be the characters I thought they were when I bought them, because I guess that matters to my nerd brain.  I mean, we'd have to move this toy off the Nova Prime TFwiki page, and that'd be super ornerifying.

Though a switch to being SG Optimus Prime would downgrade this Nova Prime toy from representing Super Racist Genocidal Monster to something a little more cartoonishly benign, like Accidentally Thumb-Mash-Favoriting Racist Tweets Somehow.  I guess in some respects that's better, but it still leaves a bitter taste.