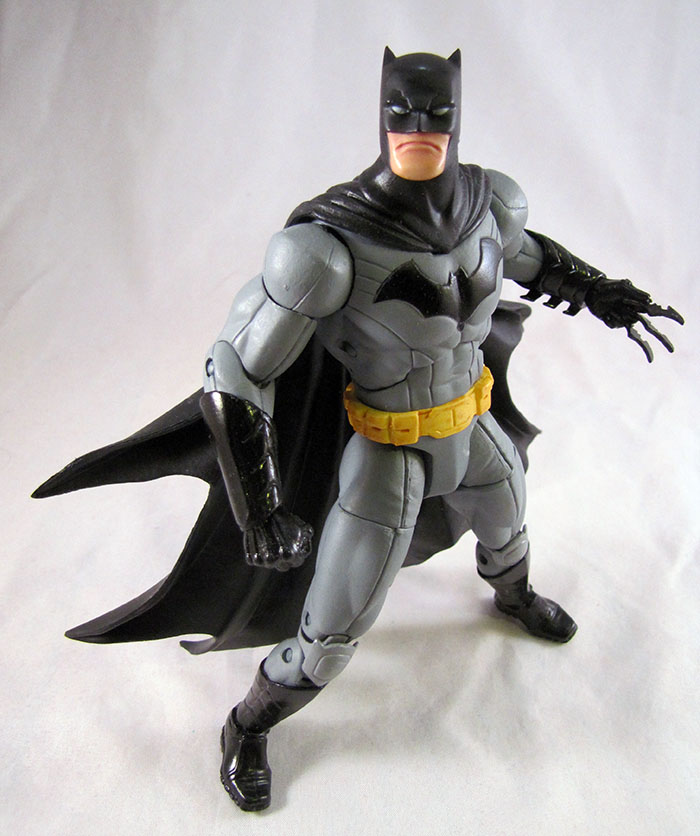 Years ago, I really liked DC Direct's move into doing toys based on certain artistic depictions of characters from various story arcs.  I have so many Ed McGuiness toys, you guys.  But then the New 52 happened, and DC Direct toys kind of disappeared for a while, and then when they came back they were all kind of generic.  BUT NO MORE.  I'm getting my damn Greg Capullo artstyle-based toys, you guys.  And I am super happy.

Along the way, I'd bought one or two Batman toys based on the New 52 Batsuit, figuring if I kind of squinted at it, it'd look like Greg Capullo's art.  This was not terribly effective, but that doesn't matter now.  I have the real deal.

I'm also happy that DC Direct's toys seem to have gotten an articulation upgrade.  Before their articulation was kind of standard -- they'd look pretty, but they didn't move much.  This new Greg Capullo-style Batman has articulation closer to what you'd expect of a Mattel toy.  In addition to the usual shoulders/neck/waist/elbows/hips/knees articulation you expect, there's mid-thigh and mid-torso and multi-directional wrist articulation.  Also the head is on a balljoint, while the ankles go in a number of directions, too.  The choice between DC Direct Pretty and Mattel Articulation is now kinda moot.

Greg Capullo Batman also comes with three small Batarangs.  He has no pockets for them, but there are similarly small gaps between four of his fingers on one hand.  This means you can wedge them in there to give Batman some Wolverine-style daggers.  They don't bury as deep into his palm as they seem to in the comics when Batman does this -- they stick out a bit -- but it's still a neat thing.  It's also kind of nerve-wracking to get them all shoved in there, as the area you're maneuvering these small pieces into is kind of small and you can easily bump one out of place and cause a domino effect.  But it's still a fun thing.

These things don't seem to come with stands anymore, but Batman does have a peghole under his right heel.

I picked up the Riddler and Talon, as well.  There was no Nightwing left when I'd gotten to the store.  I'll find him elsewhere.