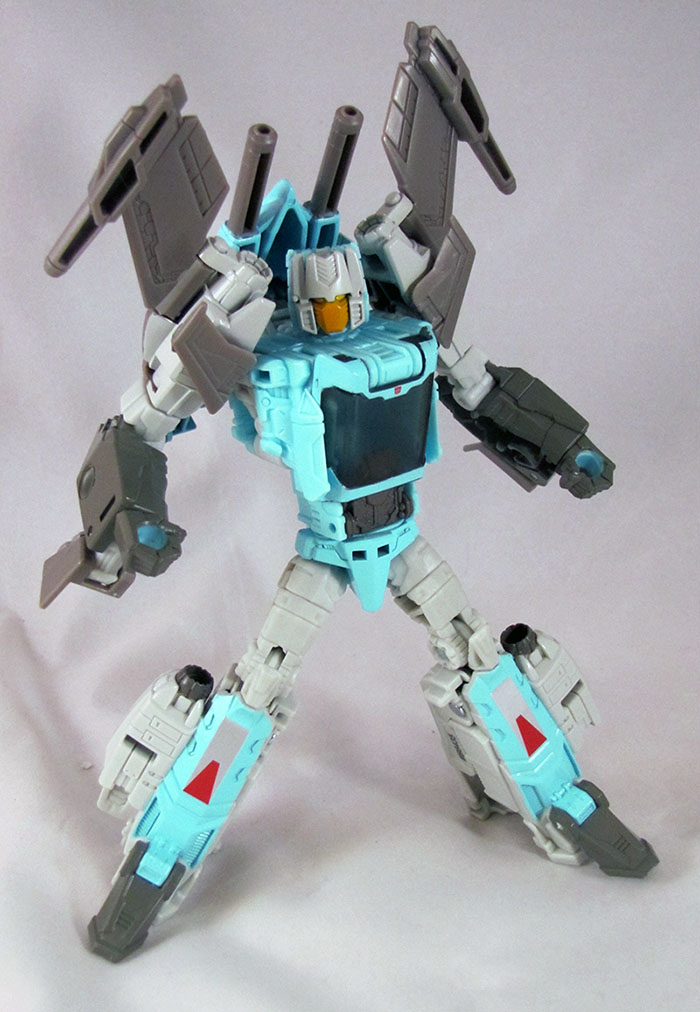 Finally, I got my hands on a Titans Return Deluxe Class toy.  Weirdly enough, it's a San Diego Comic-Con exclusive (no, I didn't go personally this year), and it's a drastically retooled version of a wave 1 toy that's been out in stores but I haven't gone looking for.  So I kind of feel like I skipped ahead instead of starting from the beginning.

Titans Return Brainstorm is the second Brainstorm toy in just about as many years, with Thrilling 30 Brainstorm coming out shortly before Combiner Wars got its start.  That Brainstorm was a Voyager Class (translation: bigger) and it was directly based on Brainstorm's More Than Meets The Eye comic book series design.  This new, much smaller Brainstorm is.... sort of based on MTMTE.  It's a heavy retool of Titans Return Blurr, and so it primarily looks like Blurr with wings glued on.  That's an oversimplification of the changes done, but it gets across the idea that this toy was not created with Brainstorm first in mind, not like the previous toy.

However, most importantly, he does have MTMTE Brainstorm's face.  There are a number of other styles of Brainstorm face Hasbro could have gone with, such as his cartoon/Marvel design, or the weird faceplateless version from Japan's Headmasters (which is a face we can assume Japan will get on their version eventually), or another interpretation of the original toy's face.  But naw, we get a second MTMTE face, which is fine by me.  I likely wouldn't have much use for this new toy otherwise. 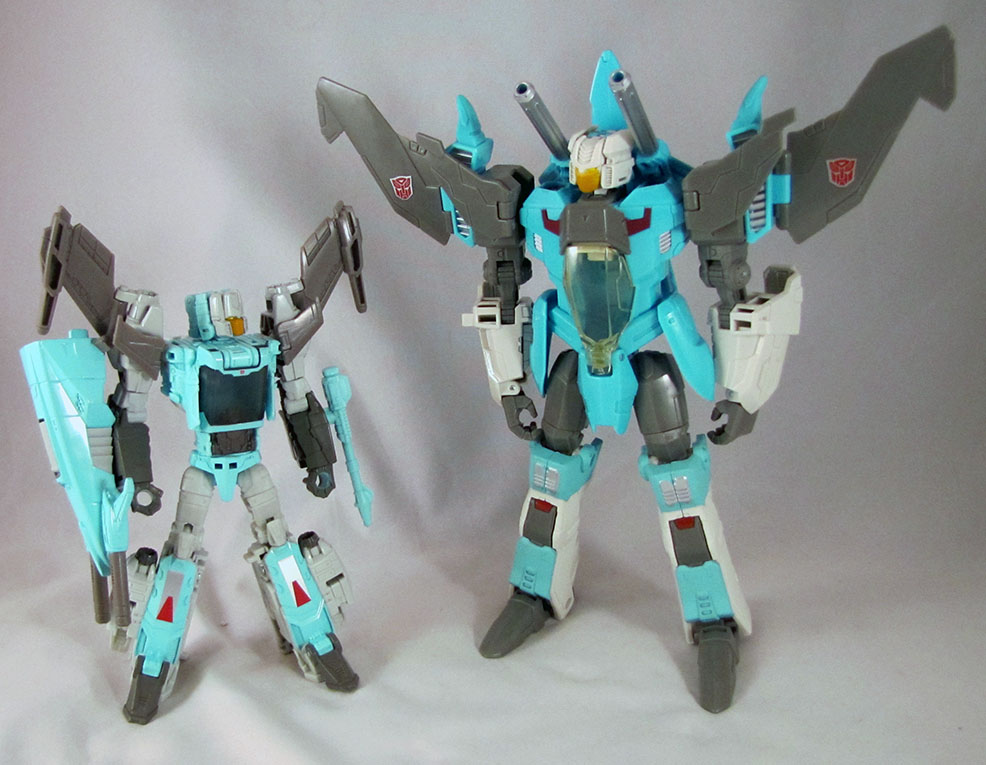 So why bother with him at all, if the previous Brainstorm toy was closer to his MTMTE look?  Well, a few reasons.  First is me reminding you that I am obsessive.  Second is his size.  The previous, Voyager Class Brainstorm was kinda a honkin' huge toy, and Brainstorm's not quiiiiiite that tall a guy.  And so this toy feels better scaled to everyone else.  Third, the SDCC version of this toy has a specifically-MTMTE-y deco, with the more cyanish teal and the teal on the legs instead of bare gray.  And probably most importantly is he comes in a three-toy box set with a new Fort Max-themed Windblade that I definitely wasn't gonna not have.  (The third toy is a translucent orange Sentinel Prime, which, again, yeah.  You know me.)

But all that said, this Brainstorm toy is a better toy than the larger, earlier one.  The previous Brainstorm was pretty damned simple.  You fold his legs under himself and he's done. ...Which isn't necessarily a bad thing.  Simple toys can be more fun to play with than complex toys, but this new Brainstorm his a better sweet spot between simple and complicated.  The new Brainstorm transforms a little upside-down compared to the old one, where instead of the feet folding underneath the front, you flip Brainstorm around so his feet fold up into the rear of the spaceship mode.  The arms unravel from the sides and you flip them front-to-back as well.  The giant nose of the spaceship, which just folded behind the back of the previous Brainstorm toy.... still folds behind his back, but you can also remove it and use it as an arm-mounted weapon or as a vehicle for his little head dude. 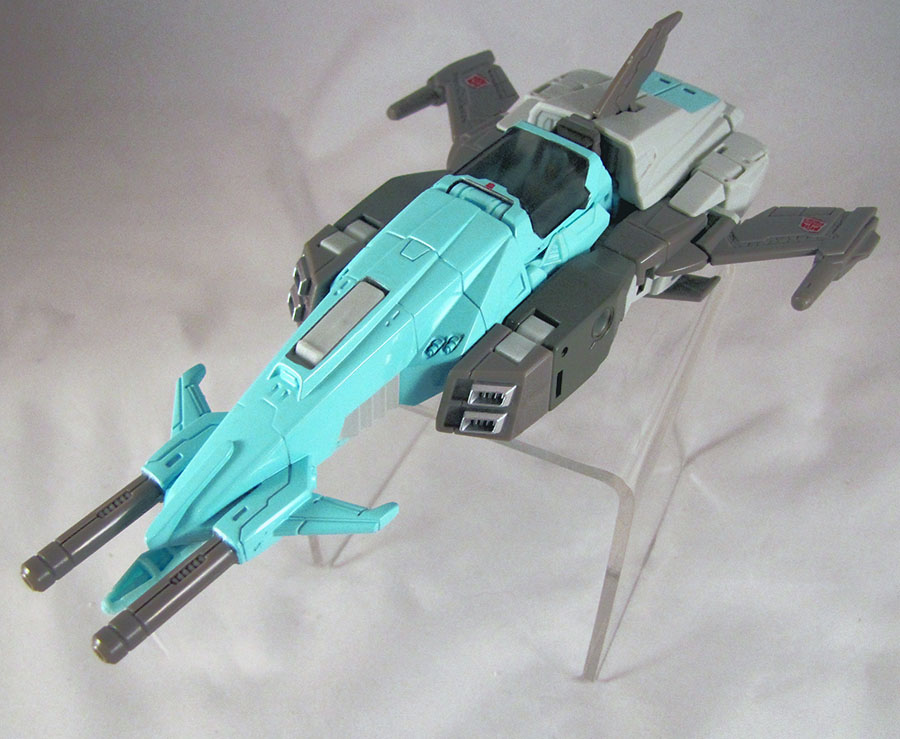 Versus either of the "official" ways to store his giant spaceship nose, I have decided to do it my own way.  I hang it upside-down on his back so that Brainstorm keeps the over-the-shoulder cannons that he has both in MTMTE and his previous toy.  (As seen in this post's first image.)  They're an important part of his silhouette to me, so first thing out of the package I tried to find a way to recreate them.  They definitely don't plug in securely, requiring gravity to do most of the work, but if you angle the support structure just behind his head just so, you can kind of hook his nosefins across the large tabs back there and have it stay in place well enough. 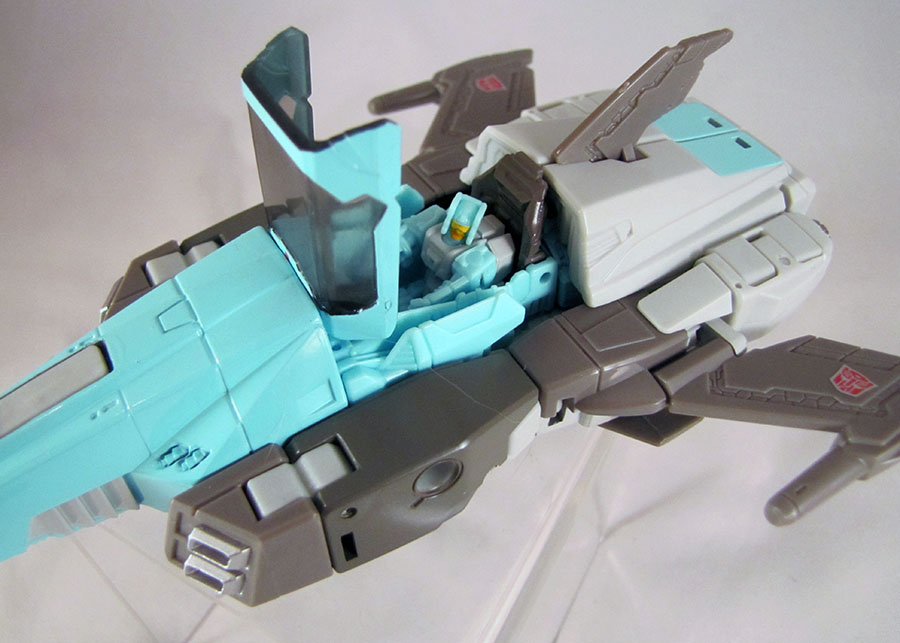 If you don't want to have to buy a SDCC-exclusive Brainstorm, well, sort of good news!  There's a single-carded version of him coming as an exclusive to Walgreens very shortly.  The Walgreens Brainstorm tries to be more like the original toy, with a mintier green, warmer grays, a  yellow cockpit window, and minus the teal on his boots.  Also his helmet might be a darker gray, we dunno for sure yet.

If you have a Walgreens nearby, I recommend trying to pick him up.  I thiiiiiiiiiink he starts showing up in August?

Backing up, Brainstorm is a retool of Blurr, right?  Well, that means he has the same partially-open canopy that Blurr does.  Which means Brainstorm is a spaceship without a fully-enclosed canopy.   Better hope whoever's driving can breathe in space!