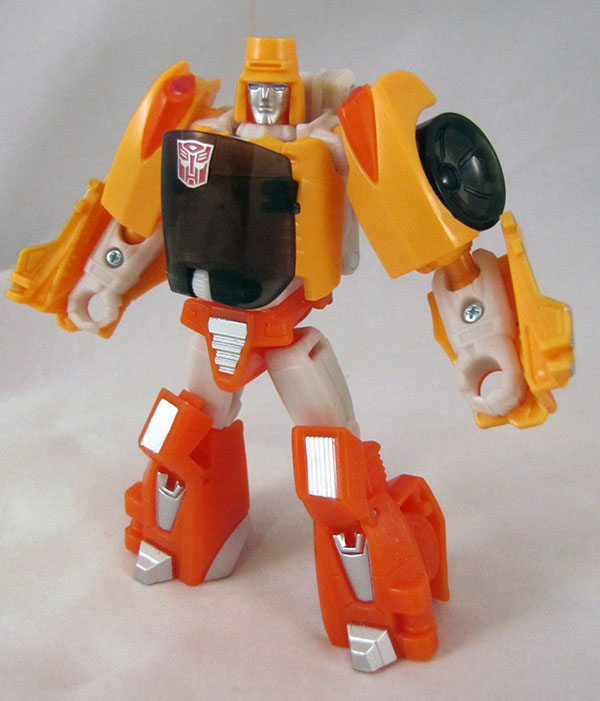 In this year's Transformers line, Titans Return, the dealio is about the little tiny robots that turn into heads.  The Leader Class guys transform into a third (*intentional pause*) base mode that can be populated by little head dudes, the Voyager Class guys can be piloted by little head dudes, as can the Deluxe Class guys.  The Legends Class, which last year's Combiner Wars line spent most of its time turning into little add-on armor or weaponry for the big-ol combiner robots, is now dedicated to providing tiny vehicles for the Leader Class base modes which can also be piloted by the little head dudes.  That means some of these three-inch tall guys are triple changers.

Wheelie transforms from a robot to a futuristic car which a tiny head dude can fit inside of and drive.  That itself is a feat, since, again, Legends Class toys aren't terribly large (they were the smallest price point until this very toyline), so that Wheelie has room for a drivers compartment inside him is kind of amazing.  And it's not like one of those "kind of floats inside like a Flintstones car" situations, where there's no floorboards and no proper roof.   Naw, you can stick a little head dude robot in him (sold separately) and close him up inside completely, canopy and all. 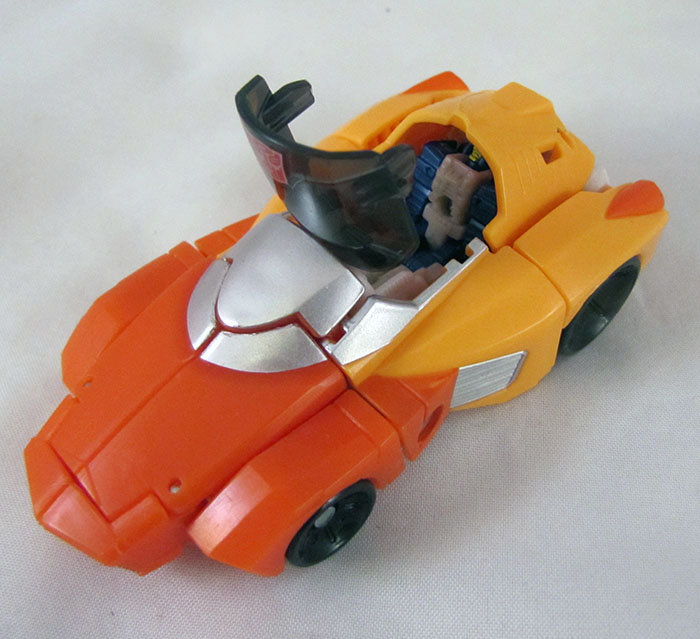 IN THEORY.  Here's Wheelie's problem, you see.  While his robot mode is fantastic for its size and the transformation itself is a dream, the vehicle mode does not actually like to stay together.  There are some very tiny, shallow tabs that are supposed to lock the arms into the top of the canopy, but they don't lock in well much at all.  And so you can easily destroy the vehicle mode just by trying to fit the little head dude inside, which seems to kind of ruin the entire point of the toy.  I would recommend fitting the head dude into the seat placement first and then transforming the toy around him.  Which is probably not the desired playpattern, but it involves less cursing overall.  This way, you can spend time trying to get the tabs to rest in the slots best you can (but never perfectly) without immediately destroying it by using the pilot functionality and having to start all over.

Or just keep him in robot mode on your shelf forever, I dunno.

This is a Wheelie toy with 5mm fist pegholes, which means he can hold any of the other Titans Returns weapons (and most other Transformers weapons)..... or you can give him Deluxe Wheelie's slingshot, which is what I have done.  You can even use its side-peg to attach it to him in vehicle mode, though, yeah, this is gonna break Wheelie apart again.  Hmph.

Maybe some other Wheelie toy has better plastic tolerances than mine, but this one definitely has problems.