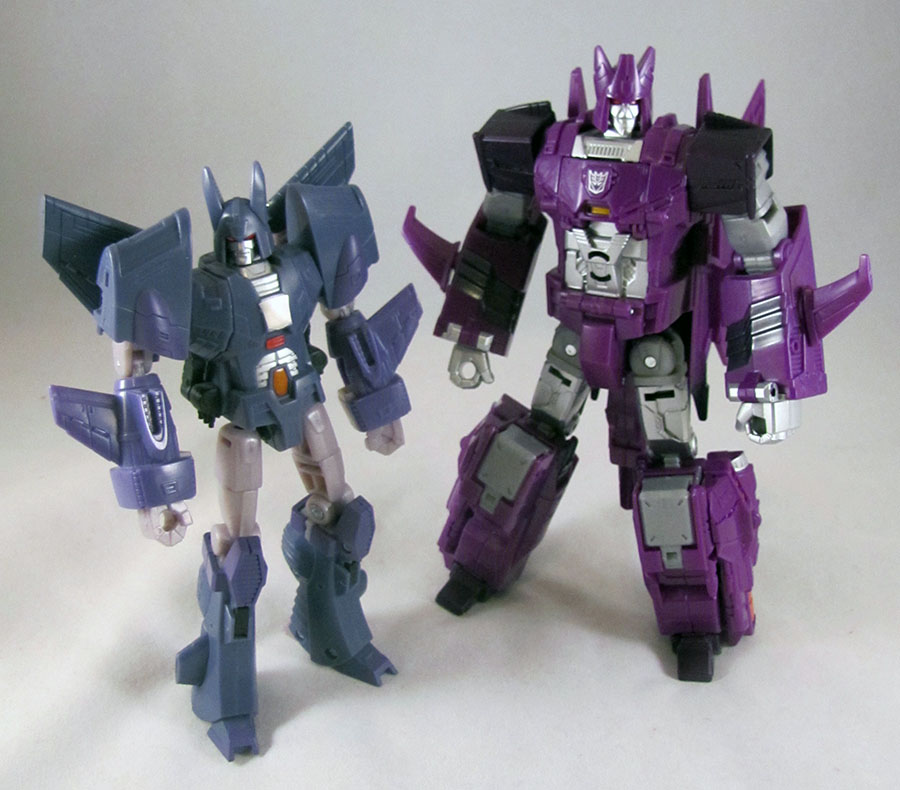 Sure, I dig my new Aerialbots, Stunticons, and Protectobots, but what's really kept me engaged in Combiner Wars is the promise of guys who were never previously combiner guys now being combiner guys.  Optimus Prime doesn't really fulfill that promise, because Optimus Primes combine kind of frequently, but when we get to stuff like Combiner Wars Cyclonus, that's when I pay attention.  A Cyclonus that's now a combiner torso, oh, and also his combined mode is Galvatronus, a Galvatron super robot.  It's a nice melding of old with new.  I will take hundreds more like this, please.

(I will talk more about Galvatronus in a later blog post.)

Cyclonus is a "reshelling" of Combiner Wars Silverbolt, meaning large amounts of him are retooled.  He's got a new robot chest and head, an entirely new jet mode, and a new super robot combiner head.  Unfortunately, this means that, like Silverbolt, he transforms by wadding up his robot parts underneath his jet mode and hoping you don't notice.  On the plus side, it's a pretty good jet mode if viewed from the top.  It's certainly a better-looking jet than the old Universe toy from 2008, which was roughly 50% Cyclonus's bulbous calves, but folks always overlooked how crummy that vehicle mode was because of how perfect his robot mode was. 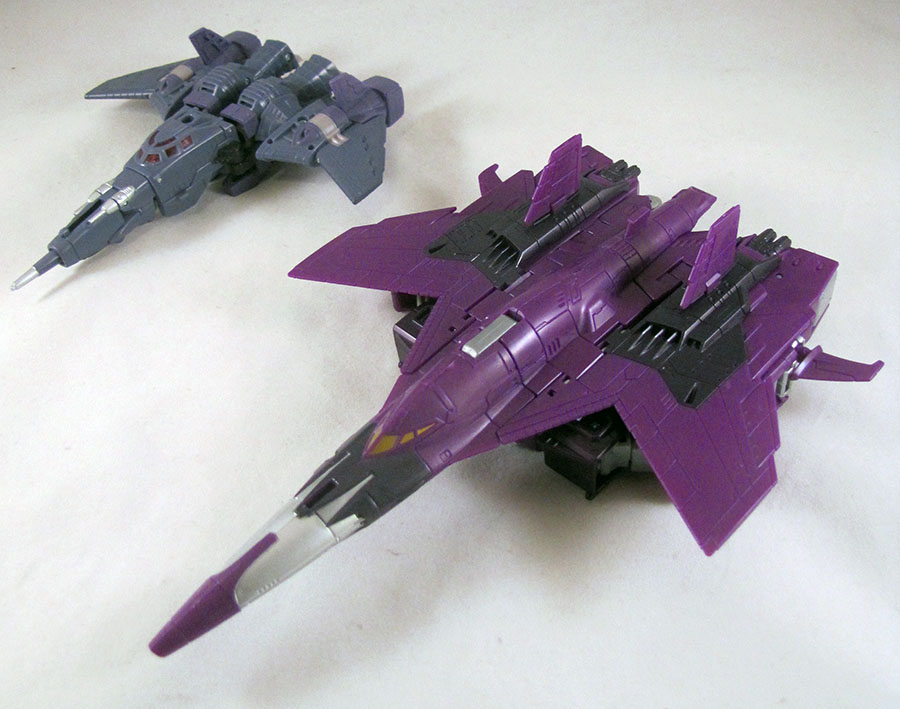 This toy trades in that perfect robot mode for a merely acceptable robot mode in service of a better jet mode.   Silverbolt/Cyclonus in robot mode is kind of stiff.  He's got the usual joints, but he doesn't really look natural in any pose that isn't standing.  I also prefer the more desaturated indigo of the various versions of that 2008 Cyclonus to the more magenta-like purple of the 2015 Cyclonus.  I do, however, prefer the larger size of the newer Cyclonus.  Cyclonus is a tall guy!  A Deluxe Class toy isn't nearly enough height for him.  Voyager Class is better.

An interesting alteration to Cyclonus's transformation, versus Silverbolt's, is that Cyclonus now has two tiny removable 5mm-pegged tailfins.  They wanted Cyclonus to have those little wings on his arms like Cyclonus tends to, but his transformation prevents him from being able to keep them on his arms, and so these new pieces were made.  You unplug them from his forearms in robot mode and then re-peg them back into his fistholes when he's in jet mode.  It's not the most elegant solution, but it's thoughtful all the same.

There's just something about the face that reminds me more of the earlier Floro Dery design for Cyclonus before he got redesigned and homogeonized like everyone else for the 1986 animated movie.  I think it's the lips.  I think I would have preferred something that took more from more recent interpretations of the character, like in *everyone else repeats along with me, because I am so predictable* More Than Meets The Eye.