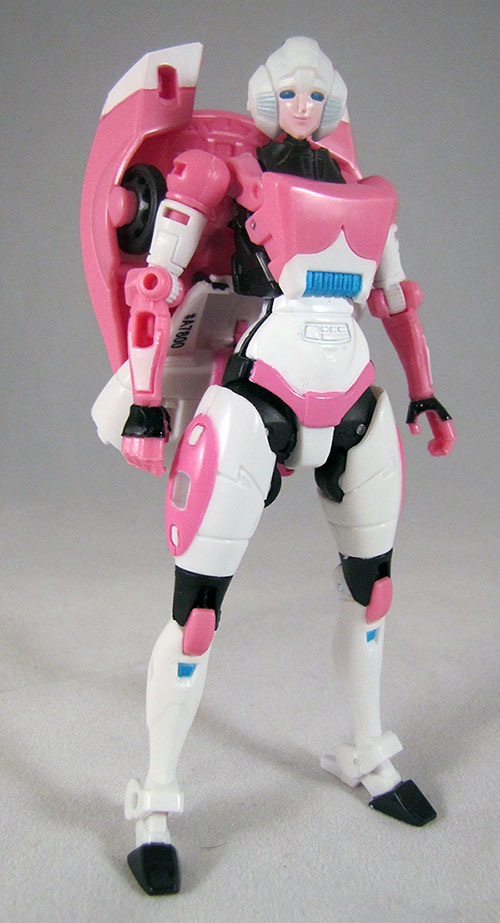 So Hasbro's all "FINE, here's your goddamned cartoon-style Arcee toy who transforms into a futuristic sportscar convertible, GAWD."   Twenty-eight years later and probably just as many offbrand third-party Arcee toys later, here she is.  The one you wanted in the way you wanted her.  Probably.

She even shares a case assortment with Chromia, another lady Transformer (who herself is a retool of a previous Arcee toy).  It's a case assortment that can potentially pass the Bechdel test!  And importantly, Arcee is gloriously pink.  They said it couldn't be done in the dude aisle, but here she is.  She's not a rosey red or rusty brown, she's legimately hot pink and white.  Hasbro's all "fuck y'all, we're doin' it."

The design of this toy was spearheaded by a guy over in Japan who fandom-famously homebuilt an Arcee back in 1998.  Additional design work was contributed from another guy who draws Arcee like this, with a broken Escher Girl spine and cheated-in cleavage.  There were some design drawings for this toy printed in a magazine that echo these choices, and, uh, I am kind of amazingly thankful that not much of it got into the final toy.  There's no sculpted cleavage and the spine isn't as broken.  That weirdly organic-looking tummy's still there, though, and if you look at Arcee's toy from the side, you can still see some of those vague shapes, particularly in the boobal area.  They, like, point up.  Look, for some people Arcee was their sexual awakening, okay???  And now those people make Transformers. 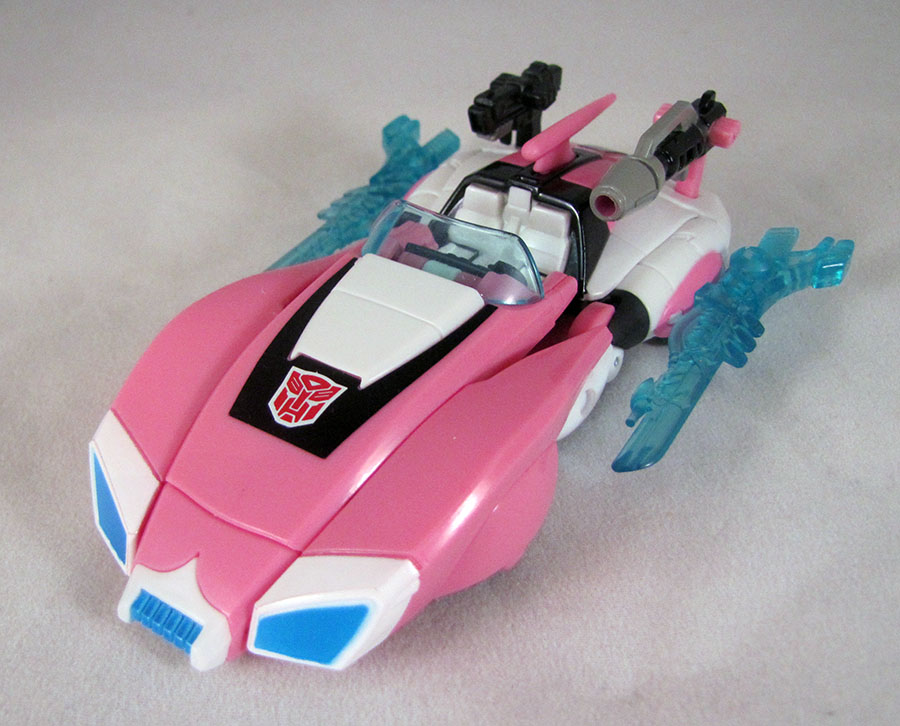 Because of the adherance to the original Arcee robot and car designs, she's kinda backpacky.  90% of the car mode folds up on her back, leaving only the very tip of the hood and some of the rear wheel hubs to serve as the chest and thighs, respectively.  The car parts fold up reasonably well, though since the back bumper kind of juts into the small of her arched back at an angle, she can't really keep her arms straight down at her sides.  It's arms akimbo or action for Arcee!  Other than that, she's a pretty good robot mode.  She'd have to be, considering she's just a humanoid robot person with a car on her back.  Good robot mode, good car mode, not so great Transformer. 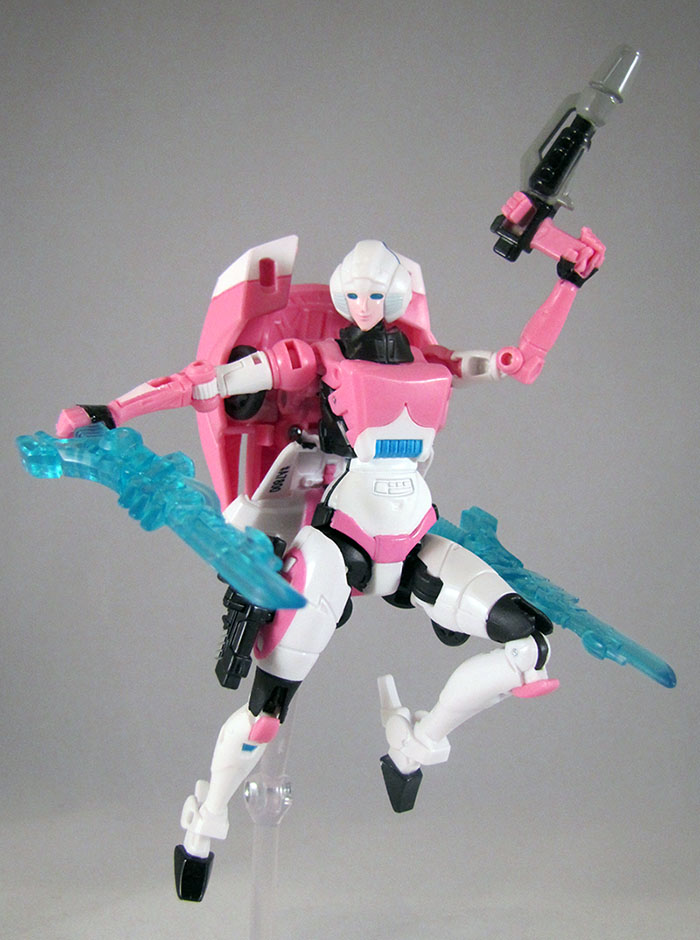 My Arcee is a version of the toy before a running change.  Later versions of Arcee have remolded fists that better hold her weapons.  In my earlier version, there's a small ledge of plastic that prevents the weapon tabs from sliding all the way through, presumably for structural purposes.  The later version removes this ledge but accommodates for structural integrity by closing her fist sculpt.  (The fingers and thumb touch each other now, is what I mean.)  The open palms look better, but they look terrible holding stuff.  And lord does she come with stuff!  It's like Hasbro was crossing their fingers that little boys love weapons more than they hate pink girls, or at least pink-girl-hating parents of less culturally-contaminated little boys.

There's two guns and two swords, all sculpted to work with Arcee and only Arcee through a tab system rather than the usual 5mm pegs.... probably because Arcee's arms are so damn thin that a 5mm pegholed fist would look conspicuous.  There's slots for these tabs everywhere on her, so there's lots of placement choices.  There's even some tabs on the underside of her front bumper (or the top of her robot shoulder kibble) that I'm not really sure are useful in either mode for space reasons.  In vehicle mode you can tab her guns in any of the many slots, or store them underneath.  The swords hafta remain plugged in visibly, though.  They're too big to hide underneath somewhere.  (the smaller gun plugs in between her arms, and her fists plug into either side of it)

At the end of the day, it's probably the best toy of the original Arcee design that you could get for $15.  There have been some better Arcee toys and there will be better Arcee toys, but if you want one of this particular design, it's actually pretty good for that.

Me, I just want one in the preproduction colors.