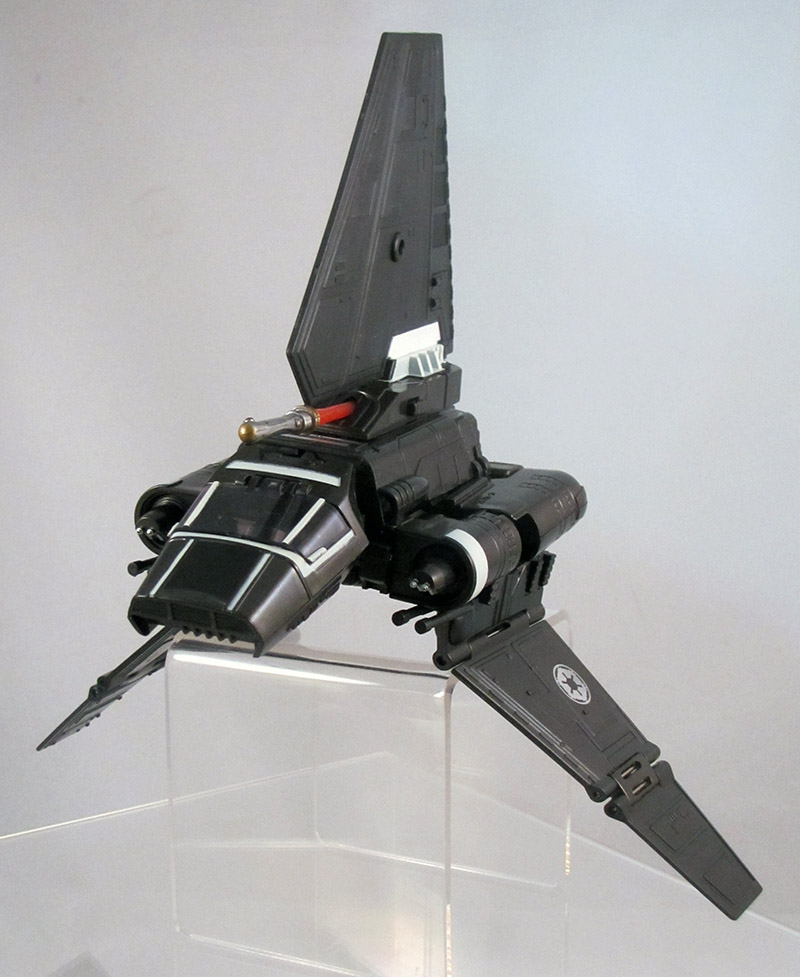 I have no idea where most of my old Star Wars Transformers are.  Maybe I gave them to my friend Ron a few years ago?  All I know is sometimes I give Ron stuff and I searched my entire basement and only found my Death Star Darth Vader and an AT-AT Snowtrooper.  I wanted to find my Imperial Shuttle Emperor "Sheev" Palpatine, but I did not, nor did I find my X-Wing Luke or my TIE Advanced Darth Vader.

But me not finding my Imperial Shuttle Emperor "Sheev" Palpatine left me open to buying a replacement!  See, I had the original white/gray Imperial Shuttle version.  At the veeeeeeeeeeery end of the line, they did a redeco in black.  A, uh, stealth Imperial Shuttle, if you will.  Or, more valuably, a robot Emperor that's in the Emperor's colors.  That redeco barely came out.  It was not really seen many places.  But I managed to find one for Not Bad on eBay, and now I have a relatively scarce Sheev Transformer.

Oh, god, I'd forgotten how bad these things were.  Like, I was kinda "yeah okay" about the new TakaraTomy TIE Advanced Darth Vader, but having this old Sheev toy again really puts that toy in perspective.  I can see why I may have given my original to Ron. 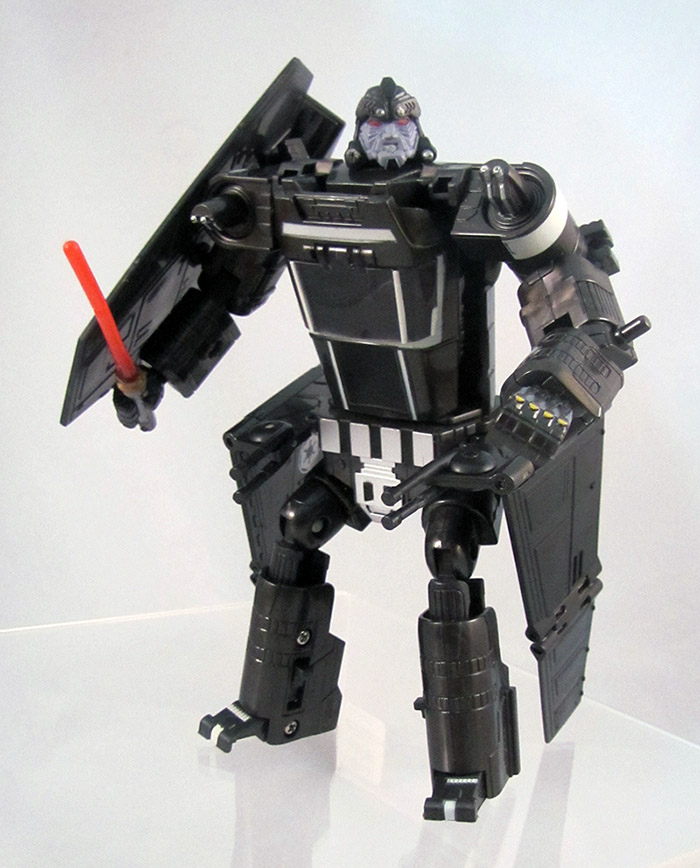 And this Sheev toy is just shit.

Yeah, this toy is not great.  During transformation, you remove all of the wings, and you reattach them elsewhere... dumbly.  Like, it's not really the positioning, though it is also kind of the positioning, but it is mostly the methods used to attach the pieces.  Tiny, tiny clips and/or barely perceptible hinge bumps.  And the instructions are no help.  They're like, okay, now, you take these wings, and you put them on his hips.  On his hips HOW?  And then you try all manner of "okay let's try putting these wings on his hips and see if they stay" and they don't, ever, until you see tiny, tiny, TINY shallow little bumps on the wings and I guess that is how it's done.  Whoof.

The middle wing becomes a shield. 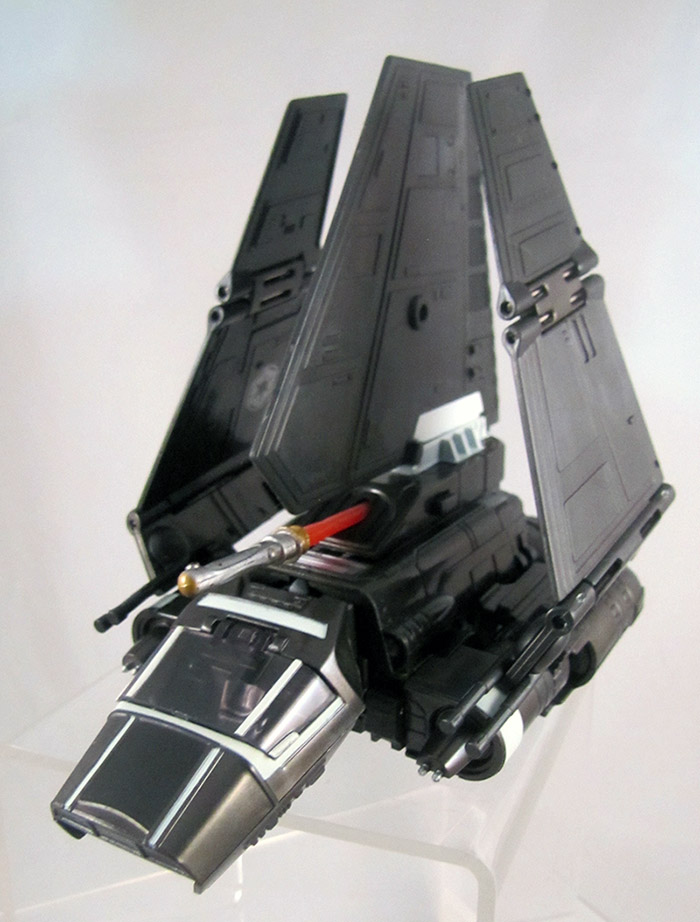 The base of the middle wing becomes a springloaded missile launcher.  The missile is the lightsaber.  That is a little bit awesome.

And, like, the wings aren't even stable.  They have more joints than are needed and it's difficult for them to hold in place in either of the two positions -- flying or parked.  It's barely even a good Imperial Shuttle toy.

The robot has a problem standing because even though the feet have flip-down heels, the heels, like, don't click in place and also they're incredibly loose.  So, like, good job.

Maybe the point of this toy is to make your anger so great that you succumb to the Dark Side.  It's working!

But yeah.  My new Darth has a Sheev.  I figure... it will be a while, if ever, before TakaraTomy gets to making their own Emperor Palpatine toy.  Like, they haven't announced a third figure yet, so it's distinctly possible Darth Vader and the Millennium Falcon are it.  And if there are more, I can't imagine the Emperor is far up on that list.  I mean, like, a Luke, right?  A Luke or even a goddamned Slave-1/Boba Fett. 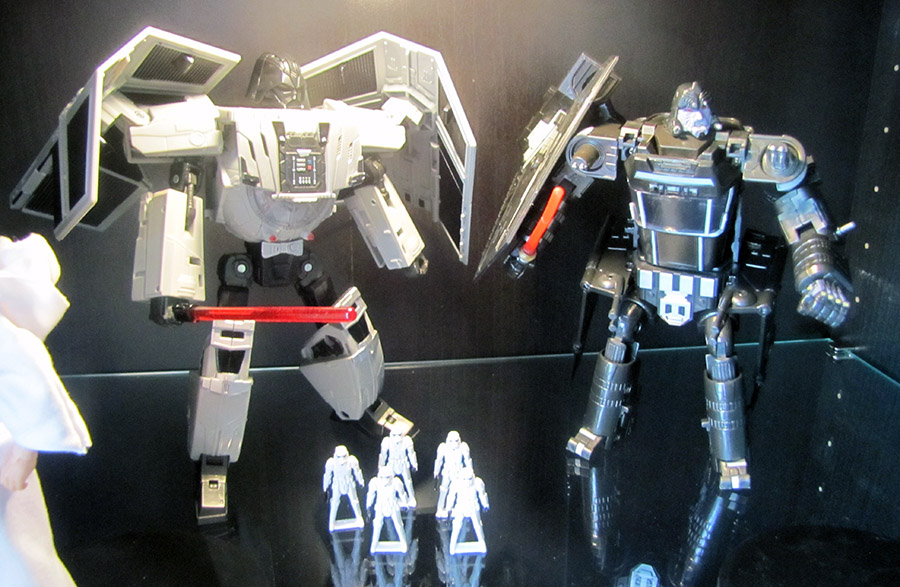 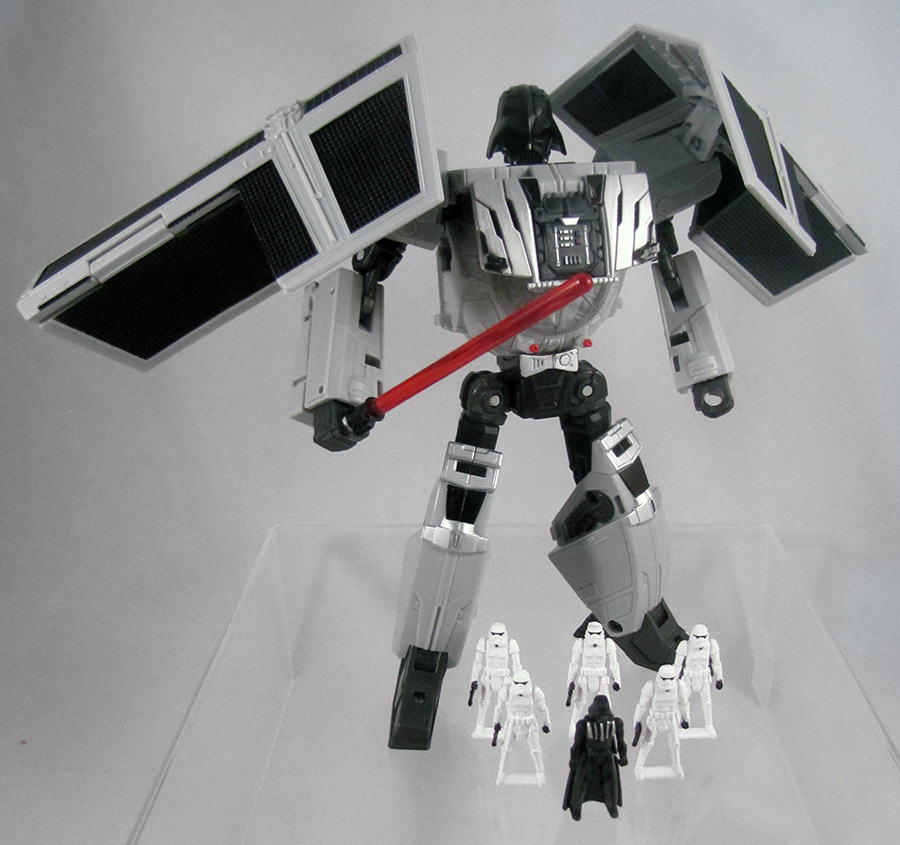 The original line was one of Hasbro's few attempts to do transforming toys on their own without Takara.  Usually Takara works with Hasbro to engineer these effers, but for the original Star Wars Transformers, Hasbro's like "we got this."  They didn't got it!  I mean, they sort of got it.  Technically, the toys transformed from robot to vehicle and back.  But engineering transforming robot toys is a heckuva learning curve, and Takara worked through most their kinks a long while ago, while Hasbro was just getting started.  You know that adage about how every artist has 10,000 bad drawings in them and they gotta get them out first before they can get to the good drawings?  Well, Star Wars Transformers were Hasbro's first few dozen drawings.

Anyway, it's 2018, and it's TakaraTomy's turn!  I believe I read that TakaraTomy was all scheduled up with engineering transforming robot toys at the time of the original Star Wars Transformers line, and they kind of regretted not getting into that game themselves.  And so they're doing it now, themselves!  First this Darth Vader Tie Advanced toy and in a month or so we're getting another Millennium Falcon made out of Han and Chewbacca. 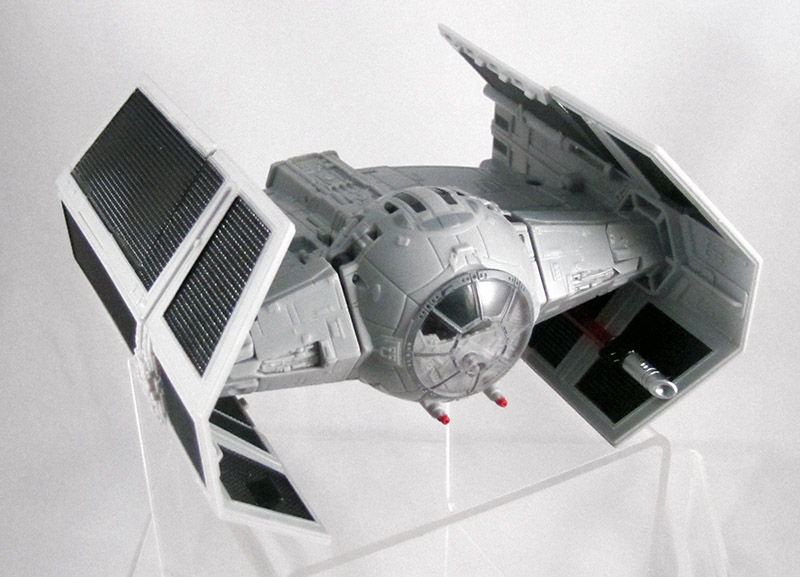 And let me tell you, as Hasbro-y as those first SWTFs were, TakaraTomy's Darth Vader is... kind of TakaraTomy-y.  I mean, he's no Robots in Disguise Side Burn or one of those Transformers Go! combining guys, but parts of him sure get in his own way like those toys often did.  Like, the TIE advanced wings perched the robot mode's shoulders... those just don't have a placement that looks nice.  And if you try moving the arms around into battle poses, the wings just start trying to clip through the torso (or the arms themselves) at any opportunity.  They're kind of a mess.

Hasbro's original TIE Vader had the wings just come off, with one becoming an arm-mounted s hield and the other becoming a cape once you re-plugged it into his back.  It's kind of cheating to remove half the vehicle mode for transformation, but on the other hand, that placement never annoyed.  (I've dug through my entire basement looking for my old Hasbro TIE Vader, but I must have given him away at some point.  Really wish I had a side-by-side comparison shot!) 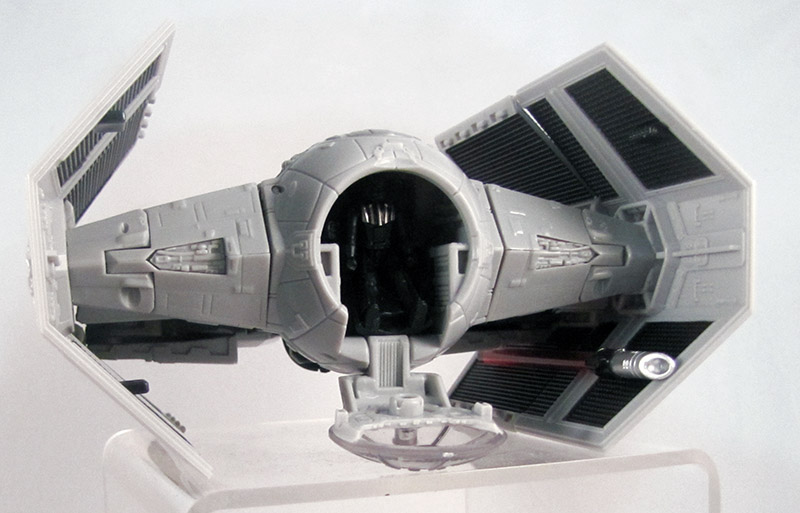 The rest of the toy is pretty simple, so that's nice!  I have a feeling New Vader would be even more of a mess if it weren't for licensing terms -- I imagine Lucasfilm/Disney/whoever probably had some guidelines on where engineering could put transformation seams on the vehicle mode.  Like, with car licensing, sometimes they're like "okay you can't have fold lines down the hood, OUR HOOD IS ICONIC, OKAY" and so you end up with a giant unaltered car hood somewhere (usually the chest).  It's possible Star Wars is similar with the TIE Advanced, I dunno.

New Vader comes with a light saber which the robot can hold and the vehicle can stow on its wing.  There's also a tiny Vader figurine which can be placed inside the cockpit and five bonus Stormtrooper figurines.

If you're cool with the awkward wings, New Vader is a pretty okay toy.  I mean, it's a giant Vader mech that Darth Vader can pilot, which transforms into Vader's TIE fighter.  There are few things more rad. 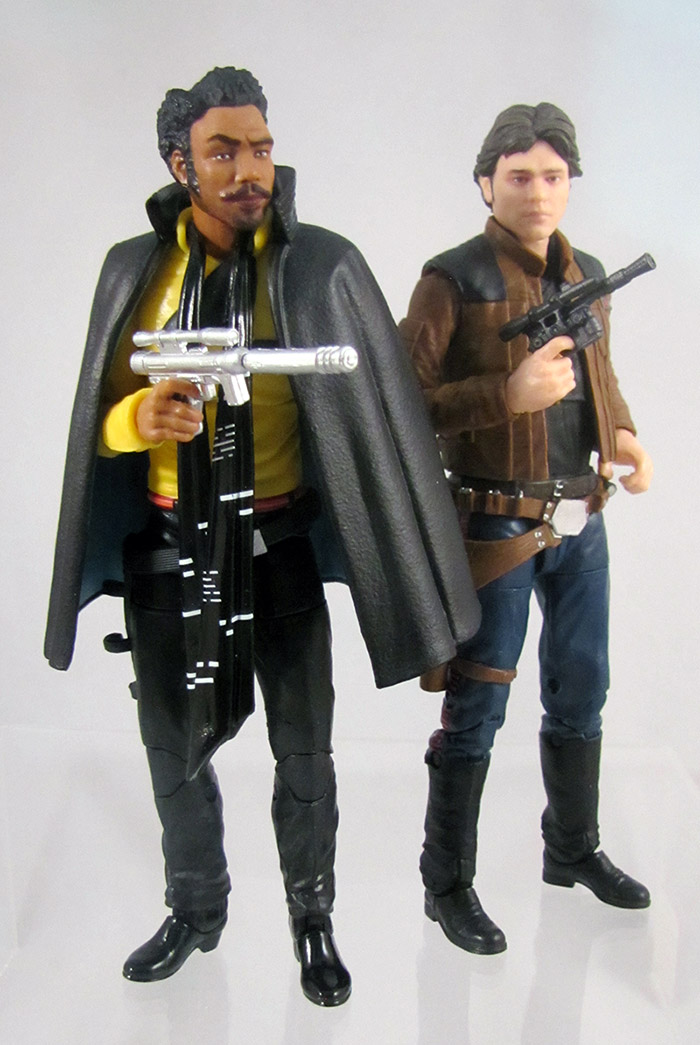 I can't believe it took me as long as it did to realize that Donald Glover playing Lando Calrissian would inevitably result in Donald Glover action figures.  It is as if the heavens opened in that entirely later than excusable moment and God shined down on me and said "YOU WILL BUY THE FUCK OUT OF THAT"

And he was right!

I don't pay attention to Star Wars toy news as fastideously as Transformers toy news (I can only spread myself so thin), so the news that Solo toys were being found in stores was delivered to me through the Star Wars Minute Listeners Society Facebook group.  By that evening, I was looking at Targets.  But one of the nearby ones had completely empty pegs and a gaddanged 75%-off clearance sale on 6" Black Series figures.  I figured that store was an eternal dead end.  I mean, who the heck isn't gonna buy up $5 Landos (or anybody else) as soon as those things hit the pegs?

But Target's online inventory kept telling me that store was in stock, despite the empty pegs, and so I went back the next day and LO AND BEHOLD there were $5 Landos.  And $5 everybody.  I grabbed up a Lando and a Grand Moff Tarkin and a friggin' Han, why not.  I wasn't planning on getting Young Han, but that was at $20.  For $5?  Heck yeah.  Lando can have his sidekick for $5.

The other closeby Target has them all for full price and I think it's just a wall of Troopers and Kylos.

Donald Glover Lando, the toy, hit at just the right time.  Hasbro's just started upping their paint deco game.  Instead of completely unpainted plastic for faces with maybe some eyes and eyebrows in there, they now do this thing where they, like, spray the face on.  Unlimited colors, at once.  Like an inkjet printer.  They print a photo on the sculpt.  And it increases the likeness pretty darn a lot!  I'd been adding some color variation to my Star Wars 6-inch guys myself, so this not only looks better but also saves me a lot of time!

And so Lando looks fantastic.  He's (usually) a $20 action figure, so he dang well better.

Lando's cape sits across his shoulders.  Gravity keeps it there; there's no attachments.  He's also got his double ties and a holster on his right leg.  I learned while removing the gun from the holster that the gun's barrel/silencer can remove.  So that's neat! 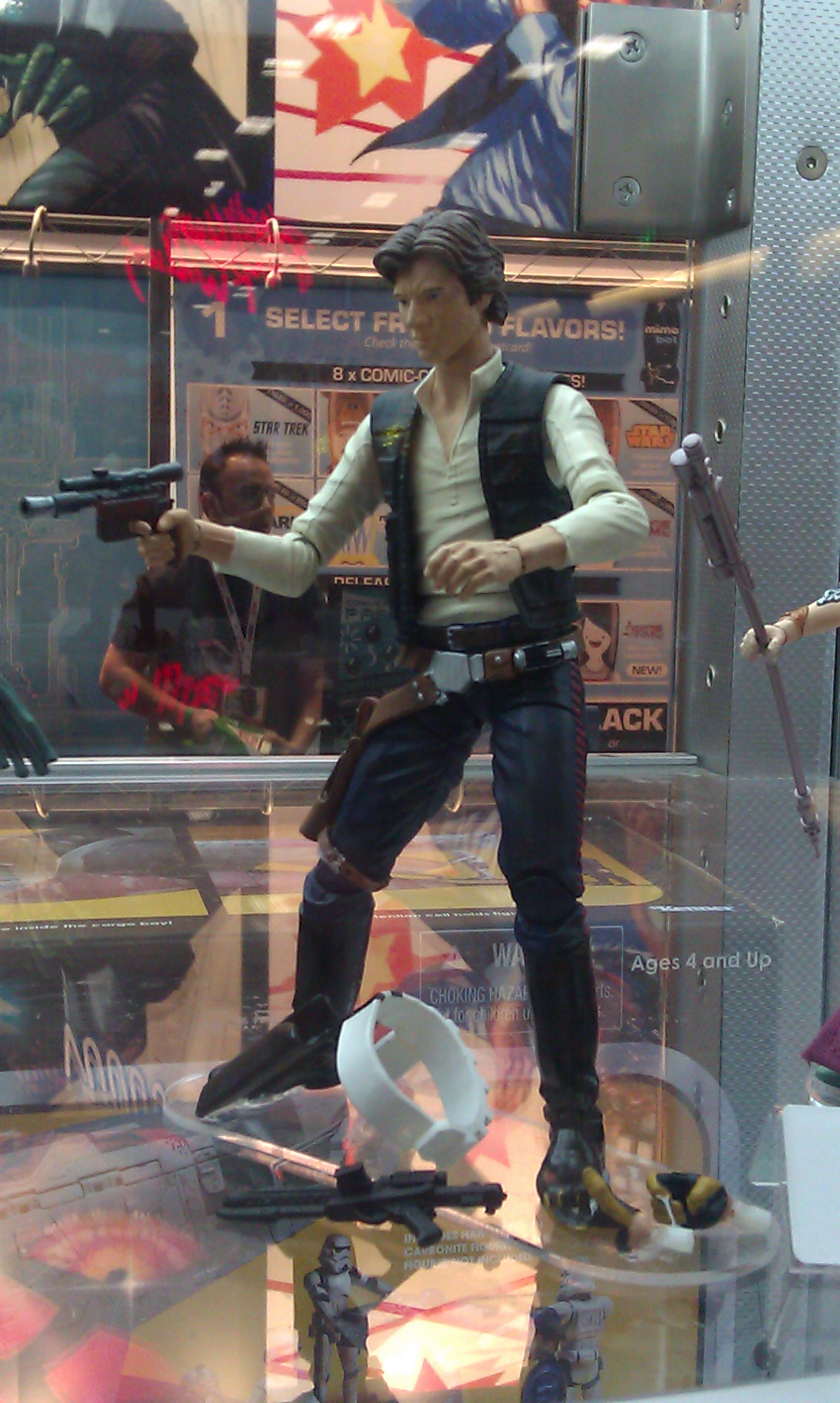 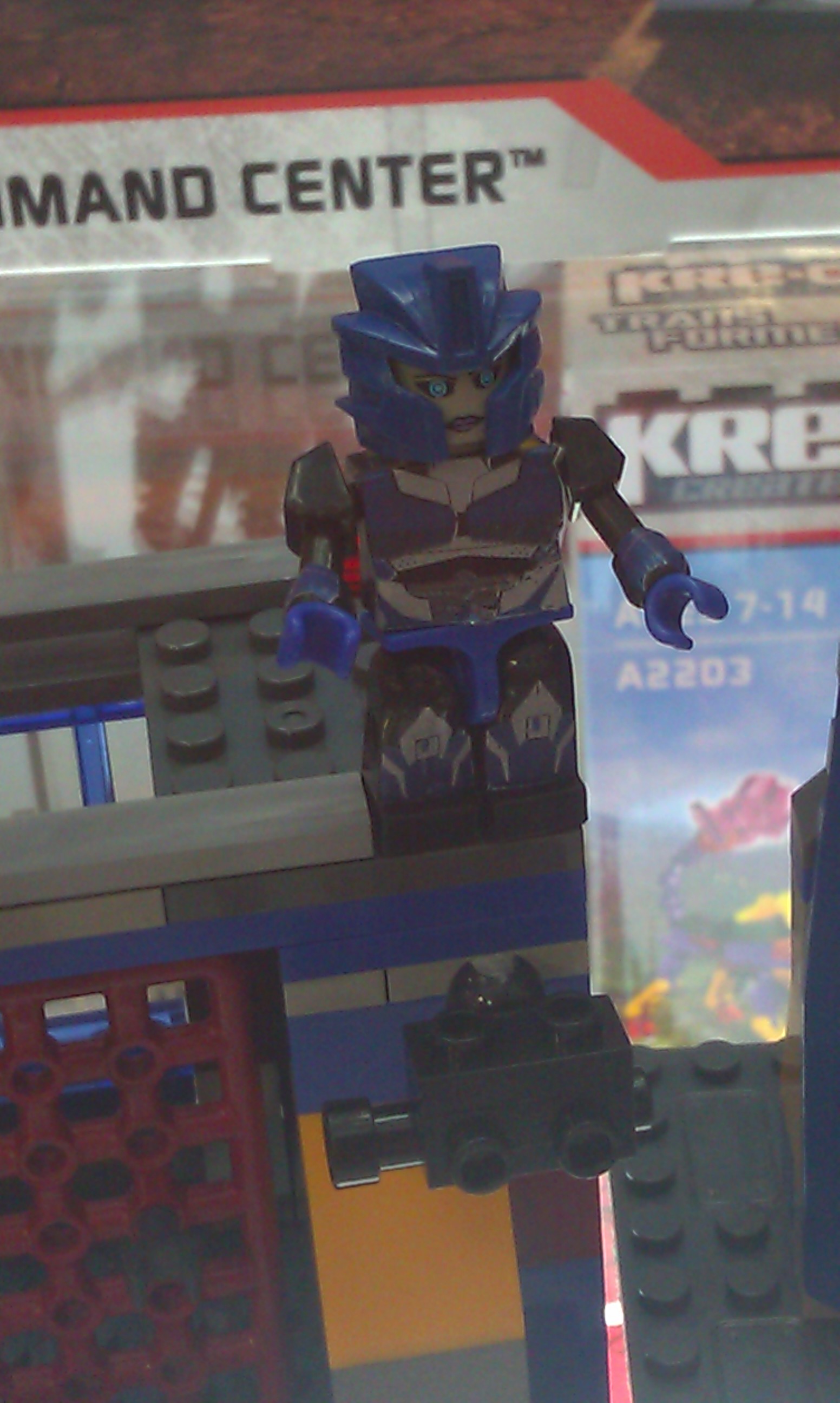 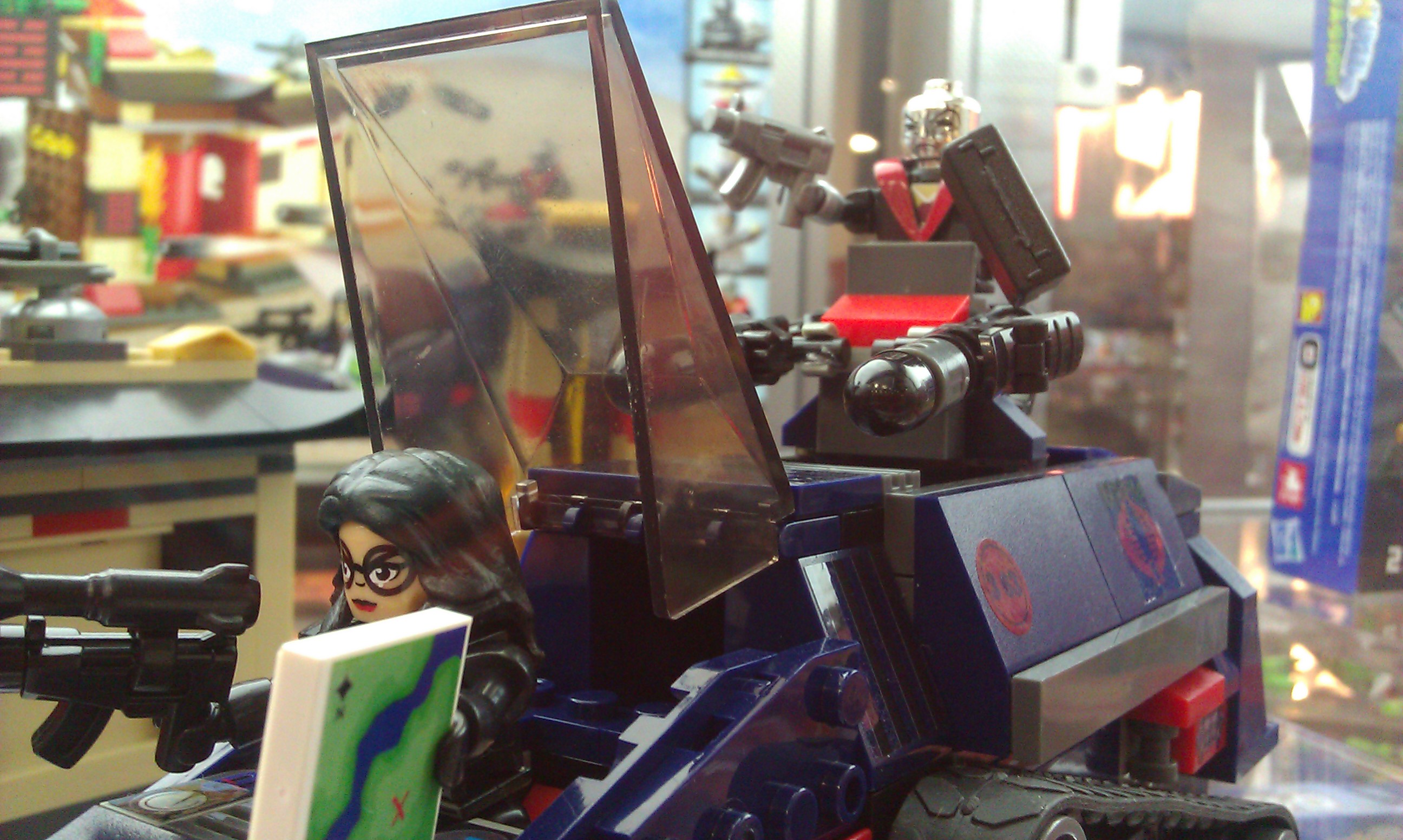 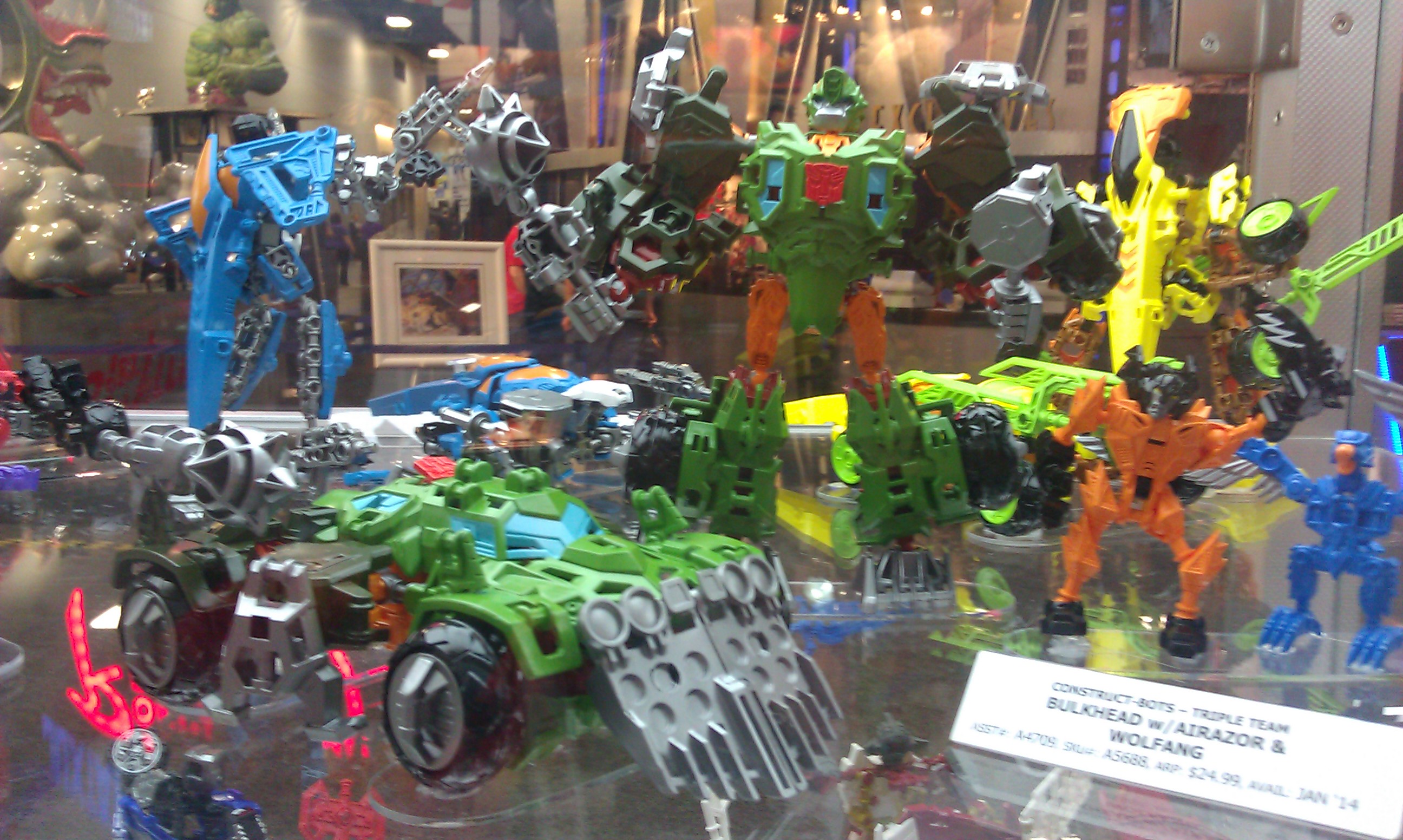 During the G.I. Joe portion of the introductory presentation, a memorial clip was shown that mourned the loss of Renegades character designer Clement Sauvé.  A piece of music was composed just for the presentation, a Sad Piano version of the Renegades theme song.  It was very touching and I'm glad they put that together.

Hasbro has a new Totally Not Lego brand coming out soon called "KRE-O," and this section was put in a tiny room away from everything else and heavily guarded.  No photographs were allowed.  Hasbro was afraid that somebody from LEGO might get inside and find out how to make construction bricks or something.  And then they put a bunch of photos of three of them in their press kits.  Well, yeah, sure, but now LEGO will never know that Hasbro is also making kits of Jazz, Ratchet, Prowl, Cliffjumper, Megatron, Sideswipe, and Sentinel Prime!

Anyway, it looks really neat, and I will probably get Ratchet. I loves me some Ratchet.