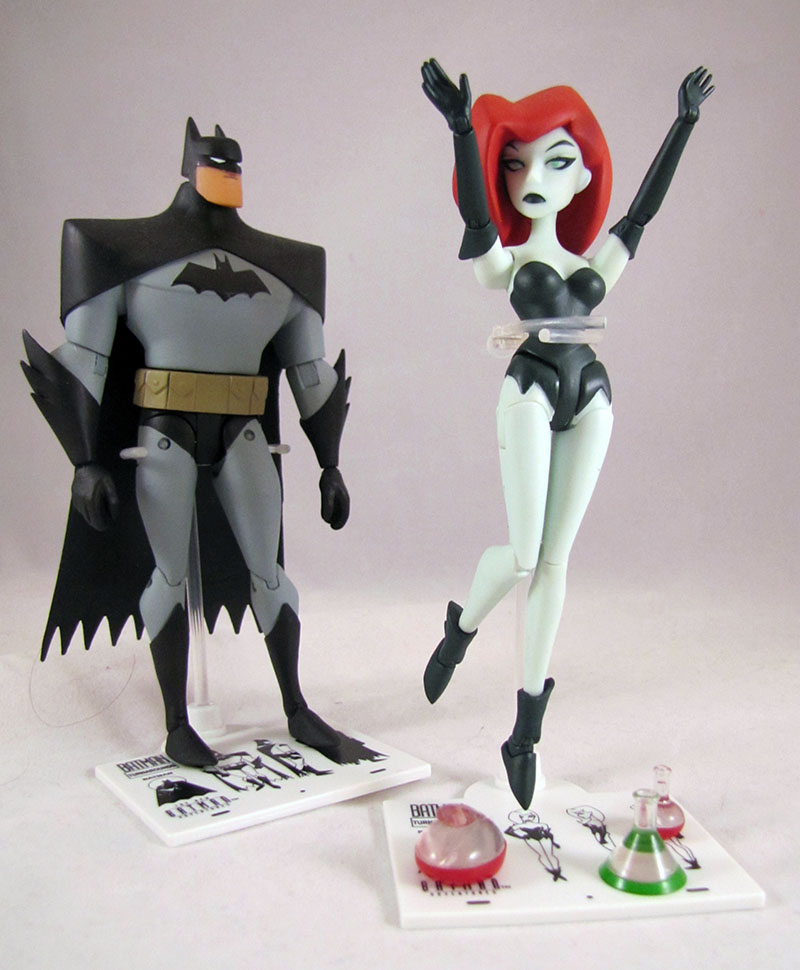 Yay, Poison Ivy!  She was held back for a few months when DC Collectibles, an actual professional toy company, learned that, oh, hey, you guys are saying that translucent plastic painted over isn't exactly sturdy and it kind of crumbles and breaks really easily?  It's like NASA learning our Moon isn't a star.  You guys should know this!

But still, they re-engineered her to not have translucent plastic, and here she is, finally!  I was looking forward to her second-most, out of all the BTAS/TNBA toys, because I love me some TNBA Poison Ivy.  The color palette, man.  I don't understand why Poison Ivy isn't always just, y'know, green.  She was in the comics for a while, but the New 52 made her peachy again.  Boo!  GREEN.  GIVE ME GREEN.  And this bright minty green is the best.

Poison Ivy comes with the same kinda stand everyone else does, with her model sheet printed on the face of it, plus two sets of extra hands and three various beakers and flasks.  She... might be able to hold one of them?  The holdy-hands -- or at least the ones that look holdy -- don't really look large enough to fit around the neck of the bottles, and I'm not gonna force it.  So let's just imagine what that would look like.  In addition to the holdy hands, she has fists and the open-palm hands she comes packaged with.  I wish she had some open-palm hands with her fingers splayed open more.  I want her to be, like, orchestrating planet growth with her mind or whatever she does.  The normal open-palm hands kinda manage a little, but it's not quite there.

Poison Ivy's head is huge!  I mean, this is on model.  Bruce Timm lady heads are huge.  But still.  It's a little more obvious in 3D.

Anyway, I love her.  Even though her articulation's a little shallow.  She's my problematic fave.